Home / Documentaries / IN THE SHADOW OF THE MOON

IN THE SHADOW OF THE MOON

The words Ron Howard Presents are unlikely to inspire confidence in even the most optimistic of viewers but if there’s one thing this film does prove, almost anything is possible.

In The Shadow of the Moon is a simple and understated documentary that splices rediscovered NASA footage that had been rotting away in the JSC archives with present day talking heads footage of the surviving moonwalkers. 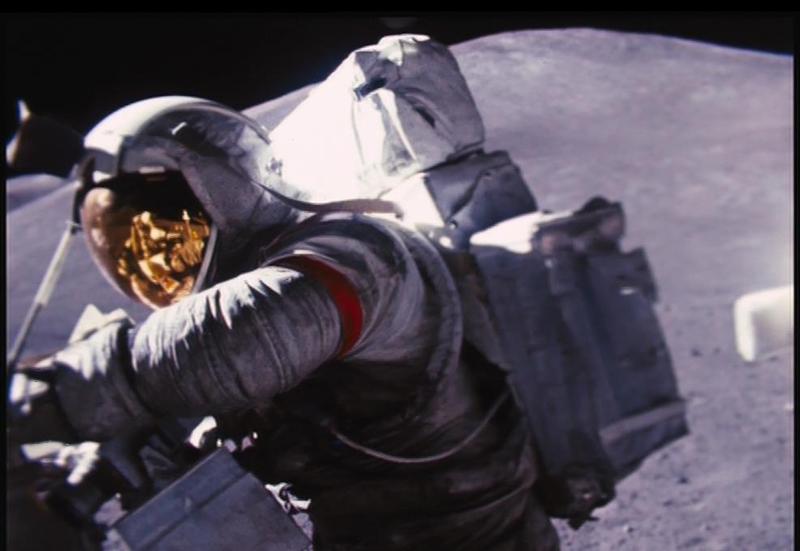 As a historical document alone this film is invaluable. Only 24 people have ever seen the whole circle of the earth from space and it’s quite feasible that as the remaining 18 succumb to old age they will be the last human beings in our lifetime, ever to have done so. It’s left entirely to the Apollo astronauts themselves to narrate the story and for the most part this manages to steer the documentary away from the dreaded Discovery Channel clichés about One Small Step and Mans Greatest Adventure, even if at times it does come across a bit like Abe Simpson yammering earnestly about that time he went to the Moon.

The Krist Novoselic/Dusty Beard of the famous Apollo 11 triumvirate; Michael Collins, in particular proves himself to be exactly the kind of laconic old geezer one could happily listen to recant war stories after a few beers.

The film does not shy away from the politics of the era. The astronauts were well aware that while they were cocooned away in their NASA bubble, America was tearing itself apart over numerous assassinations, the Vietnam War and the fallout of the Civil Rights Movement. As the Apollo 8 and 13 veteran Jim Lovell states, 1968 was a horrible year. In leaving the Earth’s orbit and providing humanity with its first glimpse of how small and insignificant our home planet really is, they managed to salvage some of it. We didn’t so much discover the moon on that day. What we really discovered was the fragility of the Earth.

That famous photo by Bill Anders of Earthrise is still one of the most powerful images ever taken but in a way I am just as amazed by the almost chilling footage taken through the Apollo 8 Command Module window as the three explorers become the first to ever leave the blue planet behind them and head out into the big black.

As would be expected, much of the documentary is taken up with Apollo 11’s first landing on the moon. Far from being a smooth ride to the surface, the mission itself was a near disaster from the moment the lunar module uncoupled itself from Columbia.

With the radio transmissions flaking out and a guidance computer that had all but shit the bed, Armstrong and Aldrin were miles off target and heading into a boulder field with less than 25 seconds of fuel to save them from becoming permanent residents of the Sea of Tranquillity. The tension of those final moments is not dimmed despite the knowledge of the outcome. That the otherwise unknowable Neil Armstrong had what we came to know as the Right Stuff is not in doubt. On more than one occasion in this movie he is shown seconds, even milliseconds from death and his reaction is always unflappable.

Neil Armstrong has since become a strange old hermit who lives beyond the dune sea (Ohio in other words), and unsurprisingly he declined to be interviewed; yet he still dominates much of the conversation. This is probably for the best as in many ways he is a blank slate of a man who is best left to the imagination. When the archive footage does show him speak, it is in the faltering, hesitant manner of a person completely unused to speaking in public. He has one of the most famous names on the planet yet commendably he keeps to the shadows. What he could do was land that crate. Explaining how it felt is something he can’t or is at best unwilling to do. As an almost apologetic Collins states, the nerveless and logical mindset of the test pilot that allows one to fly and land a tin foil carton a quarter of million miles away from home are diametrically opposed to the artistic skills needed to convey how it feels to take part in such a momentous event.

One moonwalker, Alan Bean became a professional artist, albeit one who paints nothing but the grey dirty landscape of the Ocean of Storms, and a couple of the astronauts featured were affected enough by the experience to become full time Born Again God Botherers. (Mind you, the fact that Apollo 14’s Edgar Mitchell started and was later expelled from his own new age cult is very much glossed over.) As is reflected here, it’s not enough to show the easily bored public an engineering marvel and expect them to retain interest. They want to know how it feels, not how it works. How does it change a person? What’s it like to be able to hide everything you’ve ever known under your thumb? Why did some feel like they had an epiphany up there while others left with the nagging thought Is that it? rattling around their heads. The question: How does it feel to stand on the moon is maybe beyond even the sensitive Alan Bean’s reach. Just as Armstrong retreated to a life of quiet anonymity, his partner Aldrin has no qualms in talking about the depression and alcoholism that overtook him once he’d exited stage left. Others too, allude to the boredom they felt once the intense exhilaration of Apollo was behind them.

So what was the point? Apollo cost an annual 5% of the USA’s GDP at its height and apart from proving that man could go to the moon if he wanted to there seemed to be little else in it other than pride and pretty pictures for the public at large. In Apollo’s defense, unlike most of the past centuries’ famous events, Apollo presented a story about hope rather than tragedy or death and even with its steep price tag, it still cost a mere fraction of the disaster in Vietnam, with the added advantage that this was a race that the USA actually could and did win. There is a lovely anecdote by Michael Collins about how in every country he visited after the landings the people he met said, not you did it but we did it. Not just America, but the entire world felt like it had taken part. Even the French were suitably impressed. However the party line that this was a noble endeavour undertaken for all mankind is shot down by one lunar astronaut. As David Scott explains it was really about beating the Russians. Thanks to the rocks brought back we did find out the age and the origin of the moons birth but sadly just as the science was getting interesting, and a geologist had managed to hitch a ride up there, the money ran out and the show was over.

In a way common sense took over but with it came a certain timidity. These aging spacemen reflect an era and a people that to me seem braver and with a brighter vision for the future than the people we are today. As the Apollo 13 Commander, Jim Lovell, puts it:

It was a bold move and it had some risky aspects to it, but it was a time when we made bold moves