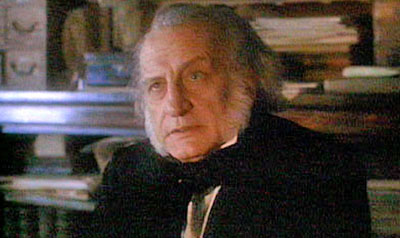 A story of manipulation, terror, torture and death, where a middle-aged businessman and taxpayer ?is harassed and brutalized by religious zealots who in total disregard of individual liberties, ?use sleep deprivation, hallucinations, coercion and death threats to ?convince? this man to see things their way.

No, I’m not talking about events in Iraq, Beirut Lebanon, or Guantanamo Bay, Cuba, I am talking about an innocent little tale written by Charles Dickens, various renditions of a movie that has been watched by millions at Christmas time.? These movies are supposed to be happy stories of redemption, but after the transparent veneer of religious claptrap is peeled away, they are exposed as tales of horrifying terror, brutal intolerance and merciless mental and physical torture.

There are numerous versions of this classic Christmas tale, but I watched and will review the following three:

For those who are not familiar with the story, here is a synopsis: Ebenezer Scrooge is a money lender and a loner who does not believe in or celebrate Christmas. Because of this lack of belief, Scrooge is visited on Christmas Eve by four spirits. First by his deceased partner, Marley, and then by three other spirits — those of Christmas Past, Present, and Future. The purpose of the visits is to convince Scrooge to reflect on his life and behavior, experience redemption, and to emerge from the experience a believer in Christmas and a generous and changed man.

As you might expect, the most watchable version was the one in which Scrooge was played by George C. Scott.? The power of George C. absorbs the character of Scrooge and he is absolutely perfect in the role.? His supporting cast is excellent, especially David Warner as Bob Cratchit.?George C. Scott alone is ample reason to own this DVD, as he is one of the most amazing actors ever.? Highly recommended. The Patrick Stewart version was the weakest of the three, but the special effects were quite good. And the great Richard Grant was Bob Cratchit! Worth a watch for Grant, if nothing else. The hated Albert Finney (Big Fish) does an admirable acting job in the musical version, but as you might imagine, the movie was overly long and tedious, while the music was horrid.? Highlights, other than Finney?s acting, were Alec Guinness as Marley, the depiction of hell, and those giant chains. Fast forward through the musical numbers, but don?t miss the hell scene; it is great.

All three versions follow the story line faithfully.? Carolers carol, wasselers wassel, Scrooge repents (and is redeemed), and Tiny Tim is spared. Your average holiday viewer views the Dickens tale as a wonderful moral lesson, a triumph of the human spirit over crass commercialism, and a fitting tribute to the Baby Jesus. A closer, unbiased, and more critical analysis of this classic Christmas story reveals something else, however.

Scrooge is a man after my own heart.? He is smart and successful, savvy in the matters of business, and loathes other people, wanting only to be left alone.? Ebeneezer Scrooge is infuriated by those who will not leave him alone and becomes helpless in stopping the tide of relatives and do-gooders who are on a mission to change his beliefs, like it or not. The behavior that is condoned in this movie is unmistakable and familiar. The message of this story is that it is okay to use the despicable practices of torture and terror to promote your religious agenda. It is okay for a law-abiding and legitimate businessman to be brutalized for his lack of religious beliefs.? It is okay to disregard legitimate business contracts because of your own fiscal irresponsibility and poor decisions. Scrooge provides a much needed service by issuing B-C loans to marginal credit risks, providing liquidity into the economy of his city. The loans appear to be mostly unsecured and very risky. There is absolutely no evidence that Mr. Scrooge is doing anything underhanded or illegal, he merely loans money to people who borrow it from him of their own free will, and he tries to collect it when it is due.? For this service, Scrooge is loathed and resented by those who, instead of taking responsibility for their own behavior, they embrace superstition, religious holidays, and pray for his death.

In an unforgettable night of terror, Scrooge is abused mentally and physically by uninvited spirits, as he deprived of sleep, humiliated, and threatened with death unless he ?redeems? himself and becomes a believer in Christmas.? This central theme is no different from what is practiced by modern day Christianity.? The only thing that Scrooge was guilty of was his genuine desire to separate himself from the spectacle and hypocrisy of Christmas.? His only crime was that he wanted to be left alone.

In spite of the appearance of numerous ghosts and spirits in the movie, Tiny Tim is by far the most terrifying and nauseating character in A Christmas Carol.? ?Instead of being bitter, hopeless and suicidal over his small stature and crippling afflictions, he is cheerful and glib, and teaches us that it is quite all right to be crippled and living under a death sentence because it reminds us of the Christ who healed the sick and lame. The fact that there is no Christ around to prevent him from dying a horrible death from the ravages of polio is conveniently never mentioned.? The only salvation for Tiny Tim is Scrooge?s money; no gods required. He sings ?Silent Night” and is continually saying “God bless us, each and every one”, as well as other cliched phrases that made me want to hasten his meeting with the Grim Reaper.

Only slightly less sickening are Bob Cratchit and his pandering wife.? Typical breeders and deeply religious, the Cratchits are content to pump out their defective hellspawn despite their inability to adequately feed them.? Scrooge?s annoying nephew Fred is no less disturbing, as he is a notoriously poor listener who undoubtedly has designs on his uncle?s fortune.

In the version where Scrooge was played by Albert Finney, the real message of this is starkly displayed in a horrifying set that looked straight out of Revelations.? The message is clear and unambiguous, Believe…..or else.? After the visit from the third spirit, Christmas Future, a harried, thoroughly terrified and tortured Scrooge was faced with a horrible penalty for his sins.? For merely not celebrating Christmas and bowing to the beliefs of the Christ Worshipers, ??not only was he sentenced to certain death, but he was depicted as being hurtled to the bowels of hell for his “crimes”.? Upon finding himself in the place of eternal damnation and torture, Scrooge soon learns the depths of Christian depravity and is sentenced to spend eternity in a facsimile of his accounting office as a clerk of Satan, chained to a post with “nibbling” rats running around.? “Diabolical” Marley coos as he leaves Scrooge to his fate. Mind you, this sentence of eternal torture is for merely choosing to be left alone and for not sharing the bizarre fantasies and hallucinations that possess the Christian brain at the end of December. This is a holiday that was stolen by the Christians from the Pagans, the celebration of the return of the sun; the winter solstice festivals.? This scene is the greatest trailer for Christianity I have ever seen, showing the cruel depravity of the death cultists.

Why is it that such behavior and mindset are perfectly okay when done in the name of the Baby Jesus, but would instantly be labeled as terrorism if done in the name of some other god?? This is exactly what makes Christianity so odious and distasteful to non-Christians, i.e. the arrogance and disregard for the basic human rights of those who choose to not embrace the Christmas lunacy.

The movie ends poorly as individual rights and personal responsibility are swept away by the hysteria of the religious holiday.? Through intimidation and terror, Scrooge is convinced to recant his non-belief and the hordes of believers sweep in to separate Scrooge from his hard-earned resources and fortune.? The message is very clear: