SNAKES ON A PLANE

Snakes on a Plane is, above all, the most critic-proof movie ever made. There isnt a negative assessment that could hold, nor a flaw that would stick. Given the advance buzz, internet obsession, and fanatical fan base that rivals the Star Wars army of virgins, there isnt a single thing that could be said to dissuade these people from declaring it the greatest piece of entertainment in the history of the medium. The studio had them at the title, and even star Samuel L. Jackson signed the deal based solely on it, script be damned. And he was right to damn it, as it is sloppy, riddled with clichés, obvious, predictable, and so preposterous as to make satire the height of redundancy. Intentionally bad movies will use this film as a future benchmark, and its only a matter of weeks before fresh prints make their way to midnight movie screens to replace The Rocky Horror Picture Show as the new cult classic of choice. And in many ways, such a status is earned, as no film in recent memory has been designed so perfectly with the fan in mind. Script changes were made, casting decisions altered, and the dialogue itself consciously manipulated to elicit cheers and whistles from the crowds that were sure to follow. Theres been nothing like it as long as Ive been a cinephile, and for once, I believe the hype is warranted. No, I wouldnt put Snakes on a Plane on my short list as one of Hollywoods finest examples of the art form, but if the primary mission of the theatrical experience is to have a good time, Mr. Ellis and company deserve a Nobel Fucking Prize.

Theres no reason on earth to recap the plot, as its as shallow and idiotic as it should be: some nitwit witnesses a crime, the evil boss wants him dead, and Samuel L. Jackson steps in to make sure the kid survives until the trial. This necessitates a flight from Honolulu to Los Angeles, which is where our legless friends step forward. Simple, clean, effective; and the only way to ensure an evenings blast of good cheer without a single nuance entering the script. Characters exist only to show their tits, flash a leg, fall asleep, scream, or die, and there isnt a single thing we learn about them that fleshes out the inner man or woman. For example, theres an elderly flight attendant who has decided to take one last tour, which is code for old bitch done good as dead. Only its not code, and the second she appears we roar with delight with the knowledge that venomous fangs will soon find their way into her neck, chest, or eye socket. Theres an egomaniacal rap star with a small entourage, and his mission is to be a germ-phobic asshole, who will take a turn for the worse, but only before he comes to his senses and strives to make amends. There are kids traveling alone for the first time (one of whom is bitten and may or may not die), a snobbish Brit who gets his comeuppance, and a fat lady with clownish makeup who gets attacked, but only while asleep, so that she first believes the snake is part of some erotic dream. Theres a sexist co-pilot, a whorish stewardess, an FBI snake expert who must be called in to make sure the proper anti-venoms are found, and an additional agent who wastes our tax dollars surfing eBay for Pamela Anderson merchandise. Who knew not giving a shit could elicit such strong bonds? And why the hell does the snake man end a conversation with, “Time is tissue”? 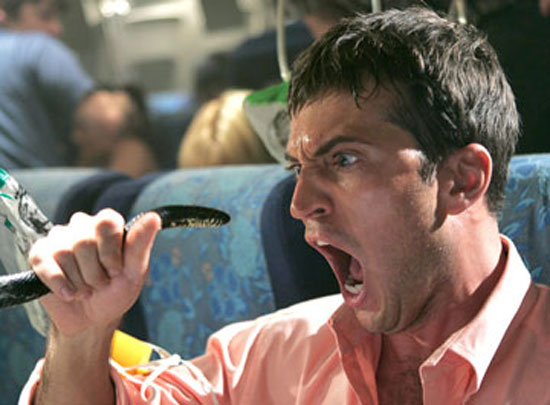 Plenty are dispatched with little fanfare (as with The Poseidon Adventure, survival involves moving to a different part of the ship/plane), but just as many get wonderful face time, especially the Mile High Club couple, who satisfy males and females alike with their perfect bodies and, because they are so obnoxiously attractive, make us even more thrilled as snakes bite them repeatedly until they are discovered much later, stone dead and puffed up with infection. The snakes reasonable decision to attach itself to the hotties nipple produced one of the loudest eruptions of the night, and who on earth could blame them? Going into the film, I had wondered how they were going to insert nudity into a story that never leaves an airplane, but the screenwriter found the thinking cap that eludes so many pretenders to the throne. That same cap was also used when the urinating man found one of the creatures attached to his penis. His pathetic struggle is a small comic masterpiece, and if theres a shred of justice in the entertainment world, this man will work again. Overacting is not as easy as it sounds, especially when youre trying to make us laugh like hyenas. In that regard, though, the talent in this film stretches far and wide, as the actors on board use broad facial expressions and gestures not seen since vaudeville, but they pull off each and every one like theyve worked the Catskills a thousand times. If Oscar saw fit to reward talent for looking bloated, sickly, and scared to fucking death, this film would take home the gold. I loved these poor saps, even if I wanted them to die like dogs.

Given the familiarity with this movie, theres no need to recite all of the lines that tickled us all pink, but a few scenes do bear repeating. Given the moronic universe this film inhabits, no scene struck me as more appropriate than the one where the gay (or is he?) flight attendant grabs a snake, throws him in the microwave, and waits for it to explode. Upon the snakes death, he snorts, Whos your daddy now, bitch? Pretty standard, right? And yet, this took place as the cabin filled with death, pitiless cries, and all levels of hysteria. Would anyone in such a situation really take such care with a single snake? But its what this film is all about: of course it wouldnt happen, but we want it to happen. And so it does. We also want to see Jackson toss around his usual profanity, flirt with the ladies, and complain about the motherfucking heat while simultaneously refusing to remove his leather jacket. And who else but Jackson could shock snakes, toss them about, warm them up with a homemade torch, slice them with bows, and blast them to bits, all while remaining the most dignified man in the room? While other actors would look silly and campy, we never question the logic with Jackson at the helm. And we know damn well that the plane will land safely (even after Jackson fires a few rounds in the fuselage to suck out the snakes), although few could have anticipated that someone on the level of SNLs Kenan Thompson would fit the very bill once reserved for titans of machismo like Charlton Heston. 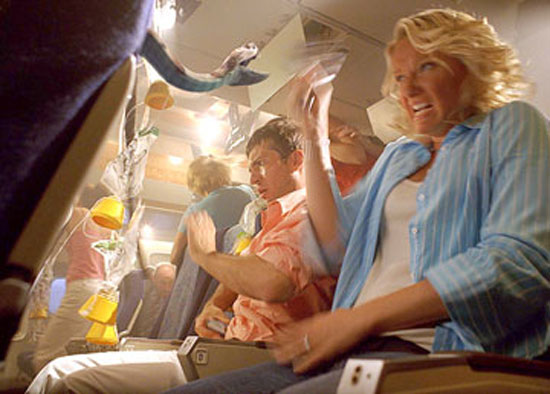 While I had a great time and would highly recommend this film to all those who enjoy mindless fun, it must also be said that it would not have reached the dizzying heights of amusement had there not been a crowd — or at least this kind of crowd. Snakes on a Plane only makes sense as a shared experience, and I cant remember having this much fun with other people in the room. While not as wild as some reported audiences (I would have killed to have snake costumes and shirtless screamers at my screening), there remained a large segment of the devoted — loud, relentless folks who hissed like snakes throughout (no joke, they never let up), repeated lines, invented new ones, and had what seemed to be conversations with the characters. Tender moments (such as when the elderly flight attendant started to die) were met with groans and laughter so intense that I thought the roof might cave in. Hoots, catcalls, and shrieks began with the opening credits and could still be heard as people filed out of the theater at pictures end. Seeing this film one day after Gimme Shelter, a horrifying spectacle that signaled the end of the spirit of togetherness, here was a new film; a bold gesture that demonstrated if given the proper setting and context, we could all get along and forget our differences, if only for a few hours. And despite having every reason under the sun to lament the decline of culture and the triumph of the inane, it made me grin ear to ear to realize that all it would take was the sight of snakes on a plane, and perhaps the baddest, sexiest black man weve ever produced.