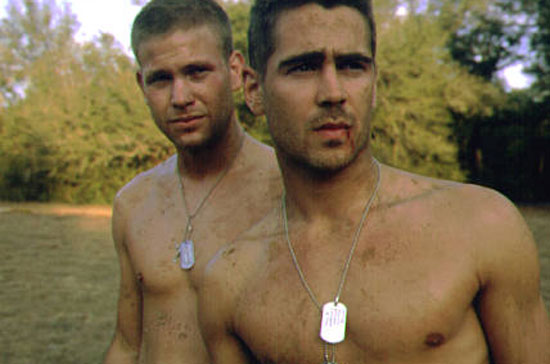 Tigerland is a must see for those of us who survived an era when NOT going to and DYING in Vietnam was simply a way of life. This is a totally different war movie as we do not see the inevitable combat and death, but instead it deals with the dread and anticipation of knowing you will have to go. Because I identify with this film, Tigerland is my pick for best Vietnam era film because movies don’t have to be glitzy to be good. The acting and direction make this a memorable film, because it deals not with fighting and winning the war, but with the awful realization that you have to die in a war that is already lost. It doesn’t quite rank up there with Apocalypse Now or Full Metal Jacket, but what does? [Ed Note: Hamburger Hill]

Joel Schumacher of all people creates a documentary-style film that was made with hand-held cameras, unknown actors, and shot in only 28 days. The gritty, brutal reality of boot camp is displayed with stark realism, a harbinger of the imminent date with combat. This is a film for men and about men.

Colin Farrell is wonderful as Bozz, the smoothest quasi-soldier that you will ever see in a uniform. He is totally cool, calm and collected, testing and tweaking his military superiors, getting their goat at every opportunity. Intimidated by no one, his irreverence for the Army and its authority is only matched by his compassion for his fellow soldiers. Bozz is Jesus Christ (The last shot at the Tigerland hell camp shows Bozz in a brilliant light, almost Christ-like) with a psychology degree….and a pretty fair jail house lawyer too. In the spirit of Catch-22, Bozz is an expert at Section 8, but ironically, cannot get himself out of the war. . How cool is Bozz? After being put on report and not given a weekend pass, he beats his buddies to town and has already scored dope and pussy by the time they get there.

There are several top notch acting performances by the unknowns in this film, such as Clifton Collins and Tom Guiry. They portray Miter and Cantwell, two soldiers that shouldn’t be there. Miter totally cracks under pressure, losing his status as platoon leader as he falls from grace. Bozz consoles, counsels and redeems this heart-broken soldier, counseling him to find his way out of the war.

The plot is a simple one and a scenario that I remember quite well. Young men were conscripted for an illegal and immoral war, and they didn’t want to go. This movie depicted the bitter end of the Vietnam War, when there were no longer any secrets about its futility or the stark reality and likelihood of losing your life halfway around the world for nothing. The officers, drill sergeants and the men knew that they were only going through the motions, that the war was lost, and yet the cannon of death still needed to be foddered.

While not an 80s Action film, the undeniable truth of mans lust for his fellow man is still quite high. The only women in this movie are fucked hard and put away wet; assorted whores and a transsexual that helps Bozz score dope and plan his escape. After picking up a couple of the local girls, Bozz and Jim dutifully mount the girls and then kick back to smoke some dope. Bored, the girls get dressed and leave, leaving the two men with each other, completely naked. You see Bozz’s naked ass as he goes to the door, walks out in the hall and states, “The girls are gone.” They don’t care and they are naked. They obviously don’t need the girl(s).

“Since when did ‘My country, right or wrong’ become Fuck this shit?” –Exasperated Captain Saunders, dealing with Bozz’s ability to get Section 8s for other soldiers

“What else they gonna do? Send us to Viet-Fucking-Nam?” –Bozz

“Yes, I do, Private. Don’t go!” –Sgt. Cota at Tigerland when asked if he had any advice on how to stay alive in Vietnam

“Why would I want to do that to another human being?” –Bozz

“Just cause you got the stripes don’t mean you ain’t gonna die.” Bozz

“The pop is the sound made when your head comes out of your ass for the first time.” –Private Johnson to Wilson