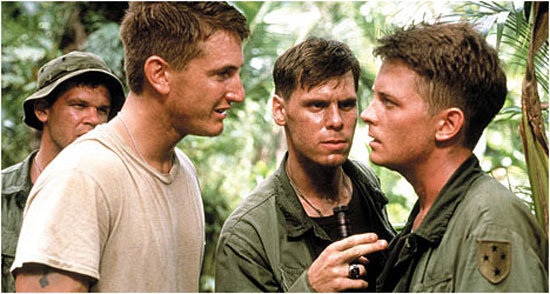 Memories are curious phenomena. In fact, since they only exist in any real sense to the individual, are they actually a phenomenon? Not to get bogged down in a screed about solipsism or the like, but perhaps do we rely too heavily on memories? Years ago there was a woman that I was madly, head-over-fucking heals, gun-in-lap, phone-on-redial in love with. She just drove me absolutely and totally insane. For a year perhaps, I did nothing but think about this particular girl. She took my heart and ran away. And over the ensuing near-decade, my memory of this woman was strong and intact. The one that got away; my love, my life. The most beautiful, the most alluring, the sexiest, the most interesting, and on and on the list went. Through happenstance and serendipity I ran into her one night a few months back. What the fuck had I been thinking? Jesus, I nearly shot myself over this useless cunt? What? And so it goes.

Take Brian De Palma’s 1989 Vietnam morality tale, Casualties of War. I had it in my head that it was a very good film. Memories, much like women, are not to be trusted. What a horrid, awkward clunky little film. As shallow as a dry creek bed, too. What was I thinking? Where did those memories come from?

First of all, 1989 means that Casualties came out after Platoon. Say what you want about Stone’s Oscar winner — at least it looked the part. The ants on Sheen’s neck still gross me out a little. Whereas De Palma’s film appears to be shot just below the Hollywood sign. And in Hawaii — the nice island. Vietnam appears to be nothing more than hiking about, raping 16-year-olds, and getting drunk. Where is Kurtz’s head-collection? Where’s 8-Ball getting turned to Swiss-cheese in slow-motion? Where’s Barnes, and the only thing that can kill Barnes, Barnes?

Instead we are asked by De Palma to believe that Michael J Fox is capable of being a leading man in a film that tries hard to be gritty. The problem is that Michael J Fox is Marty McFly. In a scene towards the end of the film, J Fox hits a dude in the face with a shovel. Trouble is, when we see the beaten man on the ground all I could think of was Biff and how Marty finally knocked his block off. Or was that his dad? Doesnt matter. Plus, J Fox is three-feet tall and Canadian. And I don’t mean Canadian as in Brett the Hitman Hart is from Canada. I mean Michael is genetically Canadian. Like if he went five weeks without getting a haircut his heart would explode. Yes, we can swallow the fact that Fox as PFC Eriksson will not participate in the gang-rape of the kidnapped girl, but him having the necessary stones to convincingly pull off the rest of the film? Nah. This role required thick gravitas to make it work, and Fox only delivered Alex P. Keaton in fatigues instead of a tie.

Opposite Fox is Sean Penn as the antagonist and heavy. Obviously, Penn can deliver when called upon, but here really all of the characters on display here are massively underwritten. Penn is Sgt. Meserve, a twenty-year-old hot shot tough guy and squad leader who thinks up kidnapping a girl from the village so they can rape her in the jungle. Penn tries his best to ape Berenger’s Barnes in terms of tough guy mannerisms (shaving with a straight razor, crazy eyes, etc), but succeeds only chewing the marrow out of the scenery rather than coming across as frightening or threatening. In fact, the whole film has a melodrama quality to it; they might as well have made Penn wear a black cape and top hat while he twiddled his moustache.

Worse than the two leads, however, were supporting players; Don Harvey and John C. Reilly. Starting with Reilly, no one has played as many big, dumb retards as this guy. Here they might as well have called him Lennie and given him a rabbit to pet. His character’s sole purpose is to repeatedly question why the squad doesnt have cold beer. Actually, at one point he points out to Fox that they are just like Genghis Kahn, a line so out of character that it becomes memorable. But for the most part, Reilly is just background noise — Don Harvey is the issue. First of all, the dude looks as if someone stuck Ron Perlman in a rock polisher for a day. Sort of piggish, sort of apeish, 100% Neanderthal. Furthermore, there were water polo players in my high school drama class who could deliver lines more competently. Harvey’s character is apparently psychotic, but again, he is so obviously just an actor playing nuts that I never bought into a second of his performance. And his stilted, unnatural line delivery didn’t help. In fact, it was painful, it hurt.

The film is based on a true story and meant to illustrate both how dehumanizing war is and also how much a single motivated and righteous man can accomplish in the face of overwhelming odds and danger. Sadly, the whole thing collapses on its face. The battle scenes might as well have been lifted directly from Rushmore as there was no sense of danger whatsoever. The rape scene, the pivotal crux of the film was shot badly. The actual rape was taking place in the background while the horror of the moment was meant to be conveyed to us through Fox’s face. Sadly, Fox has two moves in his bag of tricks, and one of them is the look as he did when Doc Brown told Marty that his mom wants to fuck him. No sale.

Was there something about Casualties of War that had tricked my mind? Was there something good, memorable even, about the movie? Sean Penn and Ving Rhames both deliver solid performances spice with just about — but not quite — enough cumin and cayenne to satisfy. The real standout is Thuy Thu Le, the kidnapped girl, but she isnt really allowed to do anything but suffer and moan and die, so as good as her performance is, she is totally one dimensional. It is all on the surface. Come to think of it, so is the entire film. Sarge, this is wrong, Cherry, this is war, is about as deep as the film digs into the motivations and psychologies of the players. So what the hell was I remembering? Probably Platoon.