Home / Reviews / Movies / THE HEART OF THE GAME

THE HEART OF THE GAME 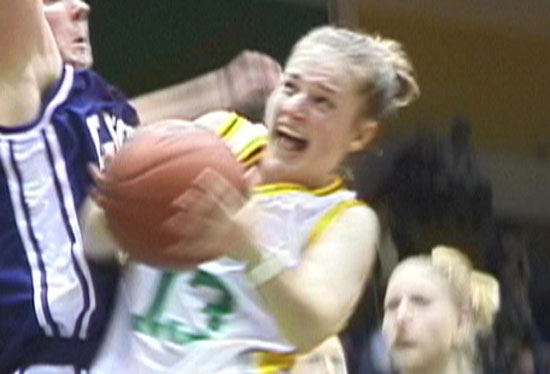 There are three essential truths you must have in your quiver before watching Ward Serrills documentary The Heart of the Game. First, all female athletes are lesbians. If you have a daughter who shows interest in a basketball, softball mitt, or lacrosse stick, she will eat pussy at some point in her life, most likely before she finishes high school. Next, American life has become little more than a massive arena, with each and every interaction taking place within its walls some form of trumped-up sporting event. Were so steeped in sports metaphors, clichés, and structure that its inconceivable to frame lifes dramas in any other way. Last, but not least, nothing is more depressing than watching a gifted young person with the world at her fingertips and the nations top colleges beckoning at her feet, throw it all away by having a baby. Its as crushing as death itself, for we know that at the moment the girl announces her pregnancy, the hope and opportunity that had opened up before her are gone in an instant. One might sob with frustration, but Im choosing to get pissed instead. I am as committed to liberalism as anyone on earth, but it has been unable to transcend one of the most glaring weaknesses of its convictions — that teenage motherhood is not to be romanticized, trivialized, excused, or pushed aside as a mere product of external forces. Instead, it should be exposed for what it is, at bottom, for millions of young women in the United States: the greatest single predictor of poverty across the board. And when there were three points at which this girl (along with her boyfriend) could have altered her fate — by using birth control, having an abortion, or giving the child up for adoption — it makes the case even less sympathetic, even though the film would have us believe that the girl in question is a success story, worthy of our applause.

The structure of the film suggests that this is a story about several years in the life of Coach Bill Resler and the Roosevelt Roughriders of Seattle, Washington, and in those scenes, the film thrives in its central mission. Resler is a tax accountant and professor of business, but is thrust into the new role of girls basketball coach, charged with making a perennial loser into a state champion. In many ways, hes a good coach, as he understands how to motivate young people, and hes so relentless and fiery that we see clearly we hes so loved by his players. Still, and in a fatal flaw that the film never explores, he becomes a sad, almost powerless figure when it comes to star player Darnellia Russell, the girl who later becomes pregnant and drops out of school. Resler claims to de-emphasize winning, but he is clearly in awe (or afraid) of Darnellia, and gives her breaks that are not extended to anyone else on the squad. Darnellia skips practices at a whim and is never punished, and locker room meetings seem more about her concerns than what the coach has in mind for the game about to begin. At a professional level, it might be more understandable, but still troubling, that a single player overpower both the team and the man in charge, but in high school, its unconscionable that any authority figure would allow some snotty kid to run the show. This is most heinous when Darnellia is banned from playing after she attempts to come back from self-imposed absence. The rules are quite clear about fifth-year seniors (and remember, SHE walked away in the first place), but smelling a state title, Resler wants to bend the rules and let her play. That the rest of the team — those who didnt selfishly let the team down — arent more furious is beyond me, and makes me wonder what the filmmaker left on the cutting room floor; you know, that which didnt fit with the rest of the upbeat storyline. 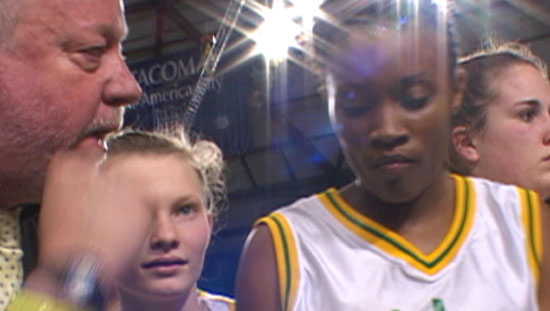 That said, the film demonstrated that Darnellia did have problems with the other star player on the team, but all seems to be handled after a closed-door, players only meeting. Darnellias breakdown — she even crawls into the stands at one point to threaten an unruly fan — shattered the teams chemistry and cost them many games along the way, but at no point does she receive any criticism from the coach. It proves beyond a doubt — once again — that star athletes can get away with anything (think of the allegedly Christian Tom Osborne not giving a shit if his players were thugs and rapists), so long as they continue to perform. Its telling that the Roughriders story (and they are inspiring, if you fall for that sort of thing) becomes one girls story, which is both a testament to youthful self-absorption and the entitlement gene that runs through so much of our culture at this point in time. Second chances I fully support, but when no contrition is offered, it becomes impossible to care whether or not someone is allowed to rise above a mistake. And when you see those packets from Ivy League schools begging this young woman to accept a fully-funded education, you want to strangle the little shit for being so fucking irresponsible. But no, the film only seems concerned with the evil Washington Interscholastic Athletic Association (WIAA) and their unfair push to keep Darnellia from playing ball. Again, the coach is never accused of violating the rules because he wants a 19-year-old girl to help his team win state; he is lionized as a compassionate soul who wants to help a kid put her life back together. I dont believe it, and the film never pursues the other side of the coin. Instead, the coach is huggable, quirky, and a little zany, so any less than noble motives are dismissed as heresy. But this isnt a nuanced exploration of the dark side of American sports; this is a rags-to-riches event that fetishizes victory, no matter what the costs. A young woman pissed away an education, but by gosh, they won the title, so we can applaud like buffoons. Needless to say, my wife and I were the only patrons rooting for the other team.

Its ruining no surprise to reveal that Roosevelt finally wins state after a wild championship game over top rival Garfield. Interestingly, Darnellia might have attended Garfield herself, only her mother insisted that Roosevelt would offer a safer, more productive environment in which to thrive. At one point, Darnellia discusses the joy she gets from playing Garfield, a school where most of her friends are, and how her desire to win is never more intense than during these games. And while only a snippet, she discusses how her friends give her grief for playing at a largely white school. She shrugs it off, but the film might have been a true landmark had it pushed further. Heres a girl, the product of a teenage mother herself, who has kept her cool amidst poverty and temptation, who nevertheless grinds away at a dream, even to the point where shell leave her closest friends behind. And then she gets knocked up, and falls into the trap her mother had taken great pains to help her avoid. Why, when Darnellia is loved by student and teacher alike, and when the larger world itself has demonstrated a willingness to open doors, does she consciously reject that which will bring her untold rewards? Why, when she is catered to, respected, worshipped, and elevated as a wunderkind in their midst? The Heart of the Game does not want to be that film (unlike Hoop Dreams, a brilliant social document above all) and its the poorer for it. No, its not just a black thing, but what about the fear of success? How are we to approach the persistent, and all-too-real self-sabotage that exists in the black community, where education and success are seen as white and inauthentic?

The true heart of the game, rather than being the hoisting of a trophy at years end, or even the grueling early morning scrimmages, is what transforms a winner to a loser. And of course, these terms have little to do with athletic accomplishments. Instead, they are best defined in terms of exploiting ones possibilities and overall potential. A gifted musician, or athlete, or writer who approaches the limelight only to retreat out of fear is the only loser worth describing, for wasted talent is the greatest of lifes crimes. There are untold reasons for such rejections and withdrawals, and it is the duty of any film to at least attempt to understand them. And no, more education isnt the answer, as were so intertwined and connected these days as to make ignorance an indefensible position. If one had college before them and decided to raise a child instead, more fact sheets or counseling sessions would have done nothing to alter that decision. Theres something deeper, and until we discover what lies at the heart of it, the game is the last thing we should care about.