Modern horror films are impossible to endure unless they are granted a subtext that they may or may not deserve (theyre sure as hell not scary). Some of the better efforts have attempted to sandwich a bit of social commentary between the bloodletting, but for the most part, these films are content to provide the same jumps and pounding scores as everything else churned out of the Hollywood sausage factory. So when a better-than-average fright fest hits theaters, one must yet again play the game where intent and interpretation are brought together and given a fair fight. Neil Marshalls The Descent, a slice of terror that understands the best horror is to be found in the disruption of the commonplace, could be enjoyed straight, no chaser, but it is open enough to allow for a discussion that moves beyond mere body counts. The presence of strange, underground creatures moves it beyond the real, but even these beings are far from easily understood. They are blind, vicious, and mindless consumers of human flesh — who are they? Products of an experiment gone horribly wrong? Aliens? Twisted evolutionary turns on the road to man? Republicans?

The story is simple enough: Sarah (Shauna Macdonald), a Scottish woman who, a year before, lost her daughter and husband in a horrifying car accident, agrees to explore Appalachian caves with several of her friends. Sarah is still a bit raw from the tragedy, but is ready to experience high adventure once again. After all, this trip is no mere walk through a few touristy caverns; they intend to go all out, complete with professional equipment, flares, ropes, and yet, no handbook or map. Juno (Natalie Jackson Mendoza), the more ambitious of the group, has decided to take everyone to what she believes is uncharted territory, and of course has no desire to tell anyone else of her plans. Pardon the digression, but what sort of people explore caves, anyway? As I get older, fatter, and decidedly lazier, outdoor activities that involve heat, dust, dirt, sweat, and effort strike me as the height of absurdity, and even though Ive concluded that I live a shallow, empty existence devoid of purpose, I am quite certain that I will never find myself in the position of having to prove myself to feel alive. Am I lost in thought on the crapper? Then Im still conscious, and no amount of derring-do will ever make me more so. You can connect with Mother Nature all you like, friend, and I promise to wave convincingly from the window of my air conditioned hotel suite.

These early scenes are pretty standard, as they should be, because of the need to generate tension. The acting is pretty bland, and the dialogue even more so, but as these are athletic chicks hanging out for the weekend, I suppose a spirited discussion on politics or literature would be out of the question. Their banality is made endurable because we know, given the set-up, that many (perhaps all) of those we see before us will be butchered like sows in the summer heat. So we go along with their march towards doom, and hope that at the very least, the blood will spurt heavily and the bones will crunch with authority. As they make their way deeper into the cave, a tunnel collapses (apparently it had been waiting for just that moment to give way), thereby cutting off the only means of escape. But one of the girls thinks there is a second entrance, so they move along with the sort of determination that masks a growing trepidation. At this point, the usual things occur — accusations, commands, and the fraying of the nerves, but it works because its all grounded in reality. Adventure outings meet with trouble all the time, and in this case, the dark, dank surroundings add to the mystery of what might be lurking about. Before long, one of the beasts is spotted, and a new level of danger is added. 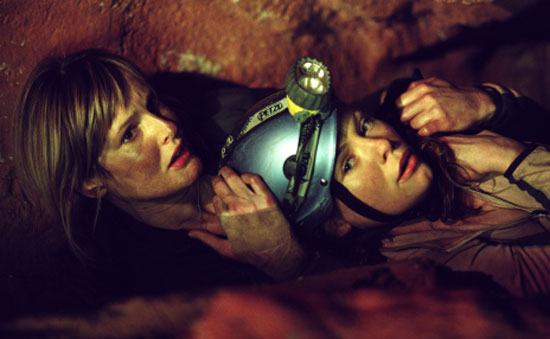 So yes, the carnivorous, man-like beings attack in full force, first in sporadic pouncings, then as groups. Given the piles of bones — both human and animal — it is understood that these things have inhabited the cave system for quite some time, though their perfect adaptability would suggest millions of largely undisturbed years. Still, they must return to the surface to forage for meat, which makes one wonder if they simply choose to live below ground. They appear to lack any real intelligence, but they are efficient, relentless killers, and for once, creatures that are more frightening than ridiculous, because they might have some symbolic quality beyond their primary role as tormentors. The bloody battles between the women and these beings are tough to follow, as they are hampered by the lighting, unstable camera, and frantic editing. The style adds a dimension of confusion, but makes the scenes more terrifyingly unpredictable. The soundtrack is a bit much at times, and it never ceases to anger me why more filmmakers dont realize that silence is infinitely more disturbing than a wall of noise. And in a cave, well, it goes without saying that the drips and airless void hold more possibility that aural clues.

With the literal safely out of the way, let me add that my mind was racing with possibilities regarding a deeper level of meaning that I believed to be present. Fine, this might be pure wish-fulfillment, but if history is any guide, the horror genre is often the most courageous in terms of highlighting social issues, even if they are softened by metaphor and allegory. As such, they can get away with much more than an obvious, Stanley Kramer-style picture that wears its concern on its sleeve. First, I entertained the idea that this was a feminist parable; that these women were, in their way, the last vestiges of the movement (consider, they are independent, tough, and ballsy) and their descent into the cave — patriarchy defined — was the last noble act before masculinity rendered its final verdict. Perhaps. Next, I embraced the notion that the entire series of events existed in Sarahs mind, and she murdered each and every friend who she feels let her down after the accident (throughout, a few apologize for not being there for her). The last, most brutal killing takes place at the end, as Sarah strikes Juno in the leg, ensuring that she will die in the cave with everyone else. Sarahs act is motivated by her knowledge that Juno once had an affair with her late husband, although the clues for this are subtle and preciously few. But the betrayal is established, so we know that Sarah has cause — and an eye for revenge. The third option is that the previous theory, instead of being in Sarahs mind, actually occurred, with the same motivation by Sarah once the adventure reached its end. Either way, the story becomes a repudiation of feminism, as it argues that women are their own worst enemies, and because they are disloyal, adulterous, and back-stabbing, its best that they kill each other and let men take care of their own interests. 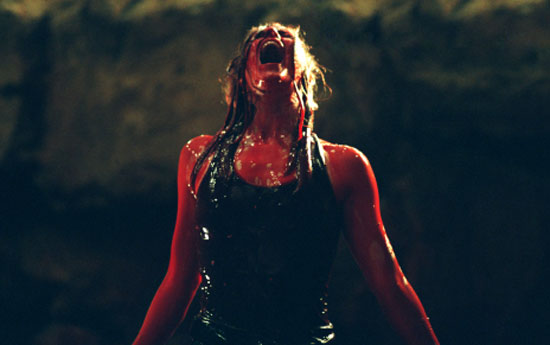 Theres an equally interesting take, though it requires that viewers know of the original ending that appears to have been changed for nitwit American audiences (this film has been popular in the United Kingdom for a few years now). In the directors cut, Sarah does not live through her trials, and dies in the cave like all of her friends. Her last thought is a hallucination of her dead daughter, forcing us to wonder if the monsters themselves were figments of increasingly fractured imaginations (after all, take heed of the character who warns the crew of the possibility of hallucinations in tight quarters). For us Yanks, we watch Sarah literally see the light and break through the surface to freedom. She finds the car, drives like a banshee, and vomits out the window, immediately before Junos undead form appears in the seat next to her. Cue music and extreme close-up, and were done. So was that final shot an indication that everything was in her minds eye? Did she also die in the car accident and all this shit occurs in the moment before death? I wouldnt go that far, as Im confident the director was asking more of his audience, but here we have another puzzle that puts everything weve seen up for scrutiny. Did Sarah actually kill them all? And what about the fact that with her hair down and her entire face covered in blood, she is a dead ringer for Carrie, another outsider forced to deal harshly with those who pushed her too far? At this point, Id even listen patiently to an argument that the ghouls are Nixons Silent Majority (they are in cracker country and decidedly white), now reinvigorated, who have at long last been given clearance to take back the country from feminized liberals. But thats what makes these kind of films so much fun. They may mean nothing at all (as unlikely as that is in this case), but they so carefully lay the groundwork to believe the exact opposite, that were fools not to give it a go.