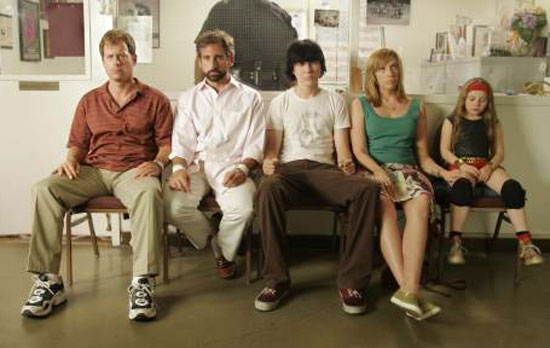 Matt Cale comes out at night…

Few things are as depressing as realizing the exact moment an otherwise good film runs off the rails; that crushing, shattering sequence of events that you know is coming, but hope might be diverted at the last possible moment. Little Miss Sunshine, the darling of Sundance and, as of this writing, one of the most critically praised films of the year, has just such a scene; an awkward, preposterous, wholly out-of-character adventure that takes a perfectly acceptable road comedy and strips its bones of any semblance of truth. The Hoover family — dad Richard (Greg Kinnear), mom Sheryl (Toni Collette), uncle Frank (Steve Carell), son Dwayne (Paul Dano), grandpa (Alan Arkin), and daughter Olive (Abigail Breslin) — have embarked on a journey from Albuquerque, New Mexico to Redondo Beach, California for Olives Little Miss Sunshine pageant, only to be sidetracked by grandpas sudden death. Due to complications involving legal forms, disposal of the body, and other hospital regulations, Richard decides to wrap up his father in a sheet and sneak him out the window into the waiting arms of Frank and Dwayne. The scene, complete with lookouts, near-misses, and all the wacky trappings of a Threes Company episode, has absolutely no connection to reality, even if it could be justified as an expression of the familys desperation to make Olives dream come true. Still, as the body was stuffed into the back of the van, I knew whatever followed would be unavoidably compromised, and there would be no going home again.

Until that moment, the screenplay — while a bit cloying and obvious (did there have to be a disaffected son whos not only obsessed with Nietzsche, but has also taken a vow of silence until he is old enough to enter the Air Force Academy?) — had mastered the small moments to be an effective representation of that middle class family we all know defines the American landscape (their dinner table discussions ring alarmingly true). Richard is a low-rent self-help guru; a fatally upbeat cheerleader who not only lives by his own nine-step Refuse to Lose program, but expects the rest of the family to take the same painful risks in the realization of his maniacal ambitions. He lectures his kin, especially poor Olive, about the implied weakness of saying youre sorry, the keys to reaching your goals, and how yes, even sarcasm is a refuge for losers. Of course, theres a madman beneath the warm glow he projects, but thats not so much a screenplay convention as a nod to life as it is lived. Show me an optimist, and Ill show you a man whos learned how to lie with a smile, to himself most of all. Hes mildly amused by his surroundings, and it doesnt take a great deal of investigation to understand that hes merely tolerated, rather than beloved.

Sheryl goes somewhat undeveloped, but its clear from her near-frantic state that shes had it with her husband, but lacks the financial and emotional tools to conceive of alternatives. Frank, recently home from the hospital after a suicide attempt, is a gay Proust scholar (is there another kind?) who has the best lines, as its clear that he best understands the pathologies that are threatening to tear this family apart. Grandpa is a heroin junkie who has been forced into the home of his son after being evicted from a retirement community, is a crusty old coot — not so much so that he becomes overly loveable, but we can see that of everyone aboard the van to nowhere, hes had the most fun with his life. He advises his grandson to fuck as many women as you can, especially now, when hes only fifteen. Hes refreshingly nasty and offbeat, but as such we also know that hell be the lone casualty during the trip. If theres an iron law of the cinematic universe, it is that free spirits only live just long enough to impart wisdom, then they die on their own terms, usually doing something theyve always loved. So hes unoriginal; at least hes fun.

And then theres Olive, a little girl we dont much care about, but who is clearly headed for disaster if she doesnt find a way to get the hell away from these people. Shes devoted all of her young life to this pageant, presumably because shes absorbed the shallowness that surrounds her, but more likely because young girls just like to play dress-up. Given the tone and nature of the family involved, we know that the film wont take her dreams seriously, unless of course they are re-cast as a last ditch effort to bring some overdue pride to this sad outfit. And so they go; driving, of course, because any other method of travel would eliminate the need for a movie, even though it is claimed that they dont have enough money to buy plane tickets for all. And yes, the vehicle has to be an old VW van, complete with a broken clutch (no first and second gear) that gives out halfway through the journey, necessitating at least a half-dozen scenes involving pushing, running alongside the vehicle, and desperately trying to jump inside. And yes, Olive is even left at a gas station at one point, which requires a screeching turnaround and breathless rescue. These scenes did nothing but pass the time, as they told us nothing about these people, save the fact that bad luck is always just around the corner. Though Richard would argue that luck is a losers way of rationalizing failure. 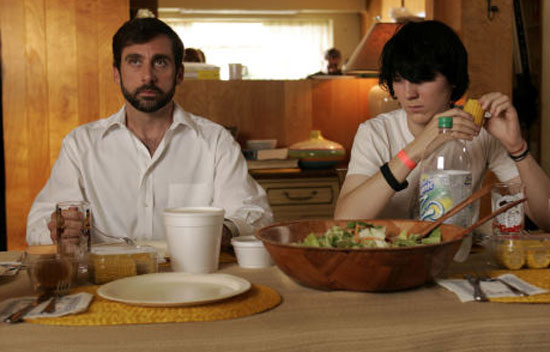 So back again to the hospital grab-and-dash, which is more suited to a Marx Brothers comedy than anything attempting satire. Comedies, in order to be something other than mindless laugh riots, must speak truth to the human experience; otherwise, what is it were laughing about? If we fail to recognize ourselves in any given scene, it becomes a mere fantasy. This might work for a film with smaller ambitions, but Little Miss Sunshine claims to have a voice with well-earned recognition. But once grandpas body has been stashed on board the van — with an unavoidable stink that no one ever mentions — the connections to the larger world fade away and we enter the limitations of the screenwriters mind. And then a cop is added, and his scene has him pulling over the van, asking dad to step from the vehicle, and then getting nervous after Richard asks him not to look in the back. He does, but rather than notice any odor or the body-shaped blanket, he looks at several porn magazines that Frank had purchased earlier. Improbably — and stupidly — the cop is intrigued, and acts in a manner no one on earth would ever approach. Its a shameless attempt to mine easy laughs, no more so than when the cop reaches the Buns & Ammo gay rag. Embarrassed, the cop sends everyone on their way, exactly as it would occur in any corner of the globe. Am I arguing that these few scenes ruined a movie of just over 100 minutes? Again, my intent is not to nitpick and blast greatness for not being perfect, but rather to condemn a film that began with promise, only to sacrifice truth for the obvious gag. A violent shift in tone can be challenging, but here, comes off as merely incompetent and a wasted opportunity.

The end sequence at the pageant itself also disappoints, because it is wholly detached from life. Leave it to this film to blow an easy target like child beauty contests, but it does, because it tries too hard to hammer home what satirizes itself quite nicely. The kids are all creepy and sad, and yes, we feel sorry for them having to put up with overweight, big-haired moms who are desperately trying to relive their own failed lives, but theres not enough of a contrast with the family weve just spent so much time with. Dad realizes how grotesque these pageants are while the girls hit the stage with their ear-piercing stabs at singing and inept tumbling that passes for dancing, but we wonder why the fuck he hadnt reached this belief long before. Its necessary, though, for him (as well as the rest of the family) to have a late awakening, because then we are treated to a free-for-all, where every member of the family joins little Olive on stage as she performs the strip-tease that grandpa taught her. Never mind that Olives routine would have been cut off within seconds (shes allowed to finish, despite protests from the humorless judges and shocked audience members), the idiocy of the finale makes it impossible to accept that what is being sent up is the very idea of these contests. Sure, why not a vulgar display set to Rick James Superfreak?

These kids are essentially served up to child molesters and exploiters on a silver platter, so why not take this where it has every danger of heading? After all, many suspect that Jon-Benet Ramsey, the most notorious example of these painted babies, became a sexual fantasy for her own father, who likely panicked after a sick sexual exercise went horribly wrong. But thats another story. It happens, and any rational person is repulsed by it. But Little Miss Sunshine fails to earn our understanding or respect, because it doesnt trust that the beauty above all ethic that rules our country from top to bottom is sufficient enough on its own to provide a story. The film has to add dying grandpas, cartoonish pageant hosts, crazy cars, porn, and, above all, a self-imposed mute who, at last, talks. Collectively, were a crazy bunch of fools and needless to say, we deserve healthy jabs nearly all the time, but one need not enter the outrageous to bring us to task. Stick to the facts and everything will just fall into place. Pull back, young filmmakers, and for once, let up when youre tempted to give it some gas.