There is a way to enjoy Woody Allens latest
regurgitation of old jokes, bad jokes, and a storyline
so familiar that the only surprise is that the cast
can get through it without falling asleep, but it
requires that the viewer be in as bad a mood as
humanly possible. Expect the worst, contemplate forms
of misery and woe, and flop down in your seat with the
understanding that the next 90 minutes will be an
excruciating exercise in unyielding torture. Enter
pissed, and you just might get your moneys worth.
That said, the movie isnt that bad, (its sad that
thats the highest form of praise Allens entitled to
these days) though it remains so obscenely
inconsequential that it could be fully understood with
only half-attention being paid. Fortunately, its
nowhere near the level of incompetence of Woodys
all-time disaster Hollywood Ending, but after his
welcome return to weighty drama, its like following a
blowjob with a TV dinner. I wanted to believe in Allen
once again (even if Match Point was itself a bastard
child of Crimes and Misdemeanors), but now Im forced
to admit that he means it when he says that he
continues working in the hope that by staying busy,
hell avoid death. Unfortunately, his neuroses are
amusing himself alone.

If youve seen Manhattan Murder Mystery, Shadows and
Fog, or Broadway Danny Rose (or any number of
bloodless comedies over the past 100 years), youve
explored every dusty nook and overplayed cranny of
Scoop, though the familiar trappings of Manhattan have
given way to London, which represents an
uncharacteristic change for the phobic Allen. But
given the script and characters, this sort of shtick
could be played out in Moscow, Cairo, or a remote
island in the South Pacific. Unlike most of Allens
films, where the city of his birth became a supporting
player, London never interacts with the actors quite
as it should, though it remains one of the worlds
great cities. This isnt Woodys home turf, of course,
but it is this unfamiliarity that leaves us cold and
bored by the locale. This is exacerbated by his
insistence on seeming to care only about the lives of
the idle class, which afflicted the New York stories
as well, but never seemed so obnoxious as they do now.
Ive usually found great comfort in the characters of
an Allen film, as they speak unlike so many
contemporary Americans, but at this point, Id love to
know if it is possible for him to stumble across a
flesh and blood human being who has no interest in art
galleries, the ballet, or classical music. Woodys
personal politics are decidedly on the Left, but with
each passing year, he becomes more aristocratic and
elitist, and not in the way I usually support. This
might have muscle if I believed that Woody was
exposing the hypocrisies of the rich, but Im afraid
he genuinely finds these people more interesting.
Shocking, but why else make so many goddamn movies
about them? 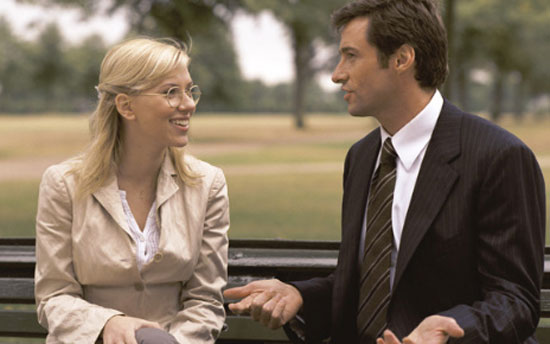 Again, if the story must be discussed, it concerns one
Sondra Pransky (Scarlett Johansson), an uber-twit
journalism student, who meets Sid Waterman (Woody)
while helping him with a magic trick in his show.
While immersed in a disappearing cabinet, she
encounters the recently dead Joe Strombel (Ian
McShane), a top reporter who returns from the River
Styx to help the young girl break the story of a
lifetime. The scoop involves the infamous Tarot Card
Killer, a serial murderer who is butchering
prostitutes much like Jack the Ripper over a century
before. The case is made bigger by the fact that
Strombels source (an equally dead woman) claims that
the killer is none other than Peter Lyman (Hugh
Jackman), a budding politician and one of the
countrys richest and most dashing gentlemen. Sondra
goes undercover to investigate, convinces Sid to act
as her father, and after a few days, falls in love
with Peter, no longer convinced that hes guilty. Joe
keeps appearing and offering more clues, while the
mystery deepens after a psychopath admits to the
killings. It should surprise no one that Peter, while
not the serial killer, has committed a murder of his
own; a prostitute that threatened to go public with
the relationship, thereby ruining his career and
reputation. Peter wisely tried to make the crime look
like the work of the Tarot Card Killer, but Sondra and
Sid stumble across the truth just in time. No, its
nothing but nonsense (including further references to
his own movies, which were themselves copying from
classics like A Place in the Sun), but it manages to
entertain in spite of itself. I have no idea why I
stayed involved, but theres no fighting it — it
didnt suck.

That said, Miss Johansson was an abomination, giving
not only the worst performance of her career, but one
so odorous that it deserves its own special category
at next years Razzies. Ive never been fond of
Johanssons work, but she can handle low-key,
disaffected parts (shes just right in Ghost World)
far better than anything approaching up-tempo. She was
clearly the weak link in Match Point, but at least she
had the dramatic surroundings to keep her grounded.
Here, trying desperately to channel a screwball
heroine in that Woody Allen style, her limitations are
laid bare for all the world to see. Shes flat,
artificial, and disturbingly wooden, as if shes
forgotten how to speak coherently. And unlike other
Allen women who are able to convey smarts, Johansson
is barely sentient, which makes her turn as a tart
able to seduce a sophisticated snob that much more
ridiculous. Shes but a few ounces from being
completely obliterated by her bosom, but she lacks wit
and cunning, and therefore becomes the last person
wed want to follow around a scavenger hunt, even if
its meant to be a mindless farce. She might have
uttered some good lines, but her delivery is so
mannered that I couldnt be absolutely certain she
said anything at all. If Woody Allens infatuation
with the young Scarlett continues, hes apt to dig
himself further into an ever-darkening hole of
irrelevance. He might disappear altogether. 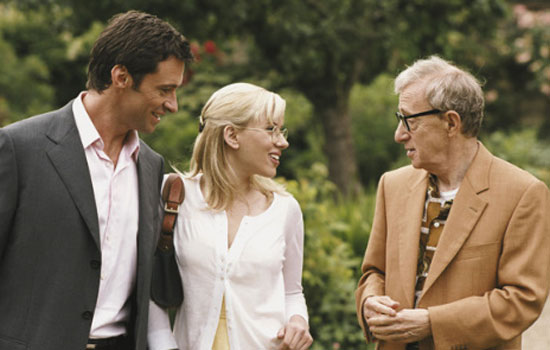 Speaking of great lines, there is one, occurring as
Woody interacts with the elite at one of Peters
parties. Asked about his religion, he states, I was
born into the Hebrew persuasion, but when I got older
I converted to narcissism. Its funny on several
levels, but most revealing of all, it sums up what
Woody Allen has become as a filmmaker. His world is so
narrow — so utterly self-directed — that he is
unable to transcend a story that has been told
repeatedly, often replaying dialogue word for word.
His films are curiously otherworldly; devoid of
politics, social relevance, or even the popular
culture in general, he shuts the doors, tunes out
external distractions, and goes through the motions of
the cinematic craft. In many ways, time stands still
on an Allen shoot, and his screenplays are a sad study
in creative bankruptcy, as well as total emotional
paralysis. In his mind, Freud remains unchallenged,
Bergman a trendy auteur, and a Mahler concert the best
way to spend an evening.

Eternal themes abound, still — the absurdity of love,
the wicked game of sex, and the randomness of life —
but Woody has left society behind, partly out of
disgust, but primarily because hes never had to take
a beating in the arena. Hes been on auto-pilot all
these years because the moneys always there, total
control over the final cut assured, and the actors
ready and willing to work for such a legendary figure.
Its true what they say — all art worth preserving,
or at least dissecting with the knowledge that it will
stimulate discussions throughout the ages, is borne of
struggle. Art produced amidst affluence, comfort, and
predictability is almost always in service of the
status quo, or at the very least fails to stimulate
the nobler passions. Its product, nothing more. But
as societies crack and crumble, the creative juices
begin flowing, and we are once again face to face with
what makes us flawed, complex, and fascinating — its
the essence of our common humanity. But Woodys world
is exempt from all that, and hes on the opposite
shore from risk and challenge. It makes sense then,
that not only can he no longer make us think, hes
unfamiliar with the very things that can make us
laugh.