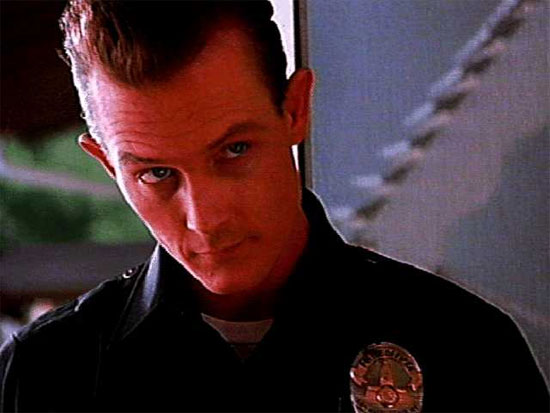 The year is 1997; approximately 3 billion humans are annihilated by Skynet (machine defense network) in what comes to be known as Judgment Day, a nuclear holocaust. Fast forward to 2029; the remaining 2 billion humans happen to be white Americans fighting robots in the ruins of Los Angeles, led by a fearless military strategist named John Connor. The Skynet army consists mainly of Terminators, invincible-ish cyborgs modeled after an Austrian bodybuilder that roam the broken cityscape in search of rebels to quell. In order to prevent John Connor (Edward Furlong) from ever becoming the resistance leader, Skynet understandably decides to send its latest prototype liquid metal T-1000 Terminator back in time to kill John at the supple age of ten. In a counter effort, the rebels reprogram an earlier, clumsier Terminator of the Austrian bodybuilder variety and send it back in a desperate attempt to protect John from the far superior, better looking, and utterly unstoppable T-1000.

Now then, lets begin the rant. Edward Furlong is cast as your typical punkass Reseda white trash brat, complete with dirt bike, flannel, bemulleted friend, and the L.A. River for a backyard. He spends his days stealing money from ATMs, playing After Burner at the local arcade, and talking back to his foster parents with the kind of snide disobedience that could only come from a squeaky pre-pube with an estrogen imbalance. I hated him the first time I saw him when the movie was released and I hate him more now. Its no surprise why little Eddie gained 100 pounds, developed a crippling drug habit, and turned to lobster theft after delivering as poor a performance as he did. I watched the Special Edition that contains 16 minutes of additional footage, 14 of which feature little Eddie blubbering onscreen like a fucking sea cow. Also, he is clearly too old to be ten, much the same way Sarah Connor (Linda Hamilton) is too butch to be a woman. Oh, and fuck James Cameron. 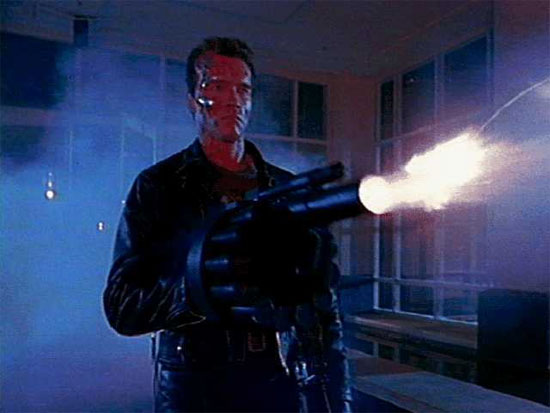 Unlike the original Terminator, T2 is a flashy, jumbled, convenient action-comedy with brief periods of mayhem, long periods of drama, and awful periods of robot humor. Examples of convenience include a lone cop that just happens to be cruising the alley where the T-1000 spawns, a disheveled biker who happens to be the size of Arnold fucking Schwarzenegger, Arnold stumbling across little Eddie in the back hallways of a crowded mall, and the T-1000 conveniently not killing absolutely everyone in sight. What the fuck?! Why call it Terminator when an indestructible liquid metal shape-shifting blob is incapable of slaughtering more than a dozen or so people? Speaking of the T-1000, Robert Patrick was born for the role — his hair rules, his demeanor rules, and the way he fires two dozen rounds from a pistol that could hold no more than ten obviously rules. I just wish he would have been sporting the fu-manchu that he was in that fireman movie

T2 doesnt quite fit the parameters of 80s Action, but it does offer up some pretty kickass carnage. I counted 17 deaths in all, several of which occur in the opening futuristic battle sequence. I also included a driver involved in a car collision that could not have survived. And lets face it, the biker-cops death was clearly implied. Most, however, are dispatched via the blade courtesy of the T-1000. The action is compounded by plenty of novelty deaths, cool explosions, loads of savage ass-beatings, and at least 8 people suffer horrible, debilitating gunshot wounds to the knees– an experience far worse than death. Still, I wouldve liked to see a healthier corpse count or even a police massacre like that in the original Terminator. I mean, cmon, its not like there werent ample opportunities for butchery. The biker bar scene, while brimming with hairy-chested gayness, was a complete waste of potential cold meat, and frankly, shouldve turned into a bloodbath because bikers are fucking lame. Why would the Terminator have spared any of them? John hadnt yet given him orders not to kill anyone. It just doesnt make any bloody sense. By the way, a dog is also murdered. 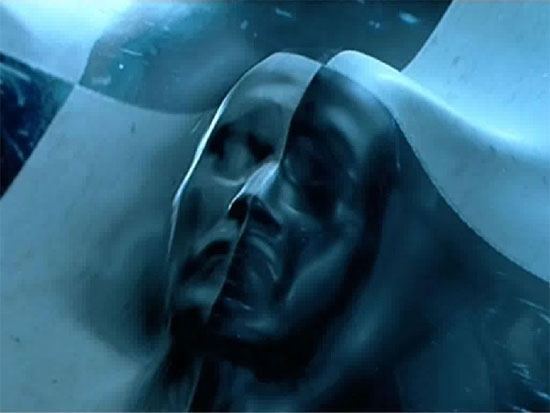 When all is said and done, T2 remains a fun movie, but ultimately buckles under the weight of its own seriousness and overexposed metaphor. The mother/son conflict between Sarah and John is painfully hokey, as well as Sarahs diatribes about the future and futility of human life and why the fuck doesnt she inhale her cigarettes?. Equally hokey is the slapstick father/son bond that forms between the Terminator and young John. The loving personality traits that the Terminator develops go utterly against the entire concept of the movie and kill its potential viciousness faster than you can say mom in your whiniest Furlong impression. Personally, I think James Cameron wouldve been better off just having the T-1000 clear the San Fernando Valley of its residents, leaving only the donut shops, the Pizza Cookery, and the Anabolic warehouse on Nordhoff.