Obsessions are far from the sole province of nerds,
shut-ins, and savants, but they are curiously
alienating when shouted in public by those lacking
even the slightest semblance of social skills. You
know the type — bearded, wide-eyed fanatics who bend
your ear with piercing tones and splatter your face
with sour spit while relating the contents of their
grocery cart or feces-ridden dwellings that may or may
not house equally blitzed, fossilized mothers now
confined to dirty chairs and ratty bathrobes. And if
they do happen to live somewhat normal lives  holding
jobs, speaking without glaring at the ground, or even
managing intercourse with a sentient being — they are
still quite unapproachable, as if at any given moment,
their arm will swing forward, the breathing become
labored, and the dialogue turn to esoteric indulgences
few would comprehend. At least thats the stereotype.
But we all have passions that would shock other,
equally passionate individuals, and only an unseen
force has seen fit to determine what is acceptable and
what is bordering on madness. Feverish exercise, for
example, is seen as good health, yet spending untold
hours in a gym is no less pathetic and narrow than he
who stares at a chess board or toothpick collection
for the same duration. Caring about sports, or
clothing, or even fine wines to the point of mania is
rarely ridiculed, and is just as often endorsed by the
larger culture. But suddenly, when the activity or
hobby turns inward or solitary, it is assumed that the
rubber room is just around the corner.

Patrick Creadons stellar documentary Wordplay is a
tale of this unique brand of freak; the sort of person
who will sit all day, pen in hand, and examine boxes,
letters, and clues with all the focus of a man seeking
high adventure. Crossword puzzles are the lonely mans
labor; teasing, clever, and always a bit nutty, they
challenge the player to flex his intellectual muscle
in ways few games ever approach. One must have a
command of the language, a familiarity with obscure
idioms and puns, and even be in touch with the popular
culture, not something we usually associate with pasty
virgins. For a game, then, it is pure skill, unlike
the more popular Texas Hold Em poker, which has taken
the country by storm, if only because most Americans
seem to sprout hard-ons at the sight of macho
dickheads pushing hundreds of thousands of dollars
before their opponent like some new twist on a high
noon showdown. Some strategy is claimed, but from my
seat, all I see is someone bellowing all in on a
worthless hand just to see if the nitwit across the
table has the stones to do likewise. More often than
not, a simple, boring pair wins the day, and the crowd
has mistakenly assumed that they have witnessed a true
blood sport. And these same participants and fans
would mock the very idea of a crossword puzzle
championship, even though the winner is always decided
by raw ability, rather than the luck of the draw. If
you lose, its because your mind couldnt penetrate
the riddle, not because you ran out of cash. 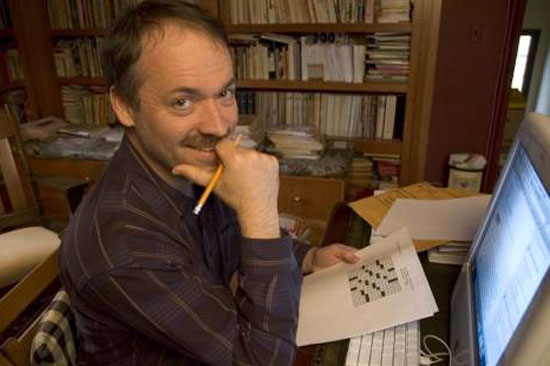 And so we follow several of the would-be champions,
including a 20-year-old college student who appears to
be in a fraternity, but the sort of brotherhood that
fails to include a single sister in any of its
late-night bull sessions. Its fine by me, though, as
hell have plenty of opportunity to purchase choice
cuts of vagina after he gets a better job than most of
us could ever imagine. Thats always the geeks
revenge. Pussy is fine and dandy as a young man, but
Ive yet to meet a clitoris that would balance my
checkbook. Each time we visit with these fierce
competitors (including a lone woman, who claims to
have had a boyfriend at some time in her past), we are
quick to judge, of course, but even I can admit that
Im jealous first and foremost of a sharp mind, even
if its primary focus is memorizing each and every
character ever featured in Tolkein. Hell, these dudes
are me, only Ive never actually won anything. Who am I kidding; Ive never even signed
up. As such, these people are doing what they love and
never giving up, which is more than I can say for
myself. If I struggle for but a moment, Im apt to
take a nap and curse the attempt.

Genuine drama is created by these competitions, and
despite the occasional hyena laugh or embarrassingly
bad stab at humor, these are genuinely good people,
more so because they dont give a shit about their
inferiors. And yes, most will be decidedly inferior to
these folks, as they have gifts few would ever hope to
attain in a dozen lifetimes. More than that, though,
they have learned to love words; they use them with
care and respect, and always know that the most
stinging poverty is not a lack of cash, but lacking an
effective and original manner by which to communicate.
When most grunt, whine, and mutter through their days,
using the same shopworn phrases and clichés to reach
some sort of begrudging consensus, the crossword
fanatics of Wordplay are able to penetrate the human
experience with joy and wisdom. Nerds they may be, but
unhappy or dull theyre not. In fact, Id argue that
every man or woman not blessed with the societal
norms of attractiveness is, in the long run, a better
person to have in your corner. That said, Id be the
first to say Id rather stare at a firm rack over
dinner than pretend to care if Picard might in fact
have kicked Kirks ass in the Triskelion arena. 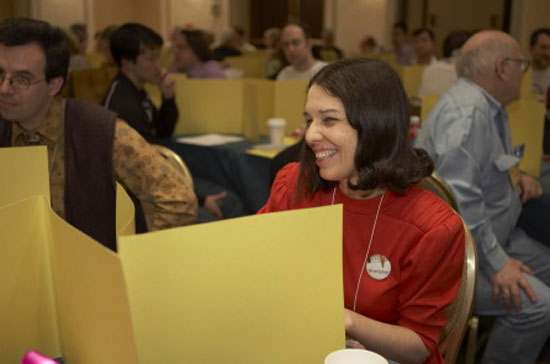 We also meet Jon Stewart, Bill Clinton, Bob Dole, Ken
Burns, the Indigo Girls, and other crossword fanatics
who spend at least part of their day staring at that
familiar configuration. Will Shortz, the current
editor of the New York Times crossword page, is
arguably the most admired man in this group, and when
we meet him we can understand why. To write this sort of thing day in
and day out without losing ones creative edge (or
even getting repetitive) is striking indeed, and akin
to churning out a catchy tune every twenty-four hours.
As there always seems to be a theme to these puzzles,
it takes more than brain power to keep readers
intrigued for years at a stretch. And the public is so
devoted, in fact, that Shortz gets more fan mail than
the average rock star, complete with declarations of
kinship and even the occasional threat. You may run
into my car, cut me off, spill coffee on my new shirt,
and even overcharge me for dinner, but dont fuck with
my daily crossword. For some, as we learn, its the
only thing that makes any sense during the course of
their day. Theres an odd perfection to the crossword,
as if entering a world with predictability and
well-defined rules, but one that takes more than a bit
of ingenuity to bring to its conclusion. This
supremely entertaining documentary brings all of that
out — the personalities, the weirdos, the lifestyle,
and the psychology — but never at the expense of the
devoted. They might not spice up your dinner party,
but theyre doing just fine.