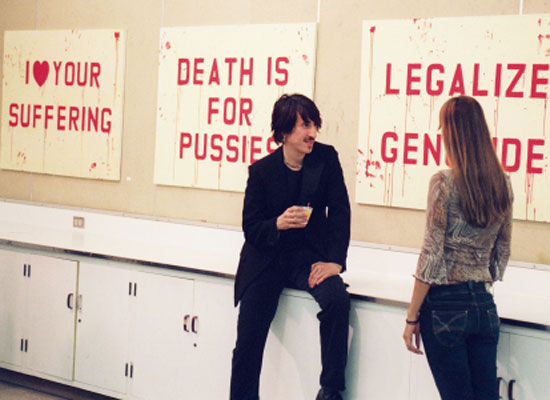 Holding snooty, painfully untalented art students (hell, artists in general) up to ridicule might not sound like the peak of cinematic originality, but, despite the obviousness of the concept, it is always a good idea to snap the collective spine of one of the worlds most heinous manifestations of pretension. Few things rattle the brains of thinking people more than those who insist that they can  and will  change the world, and such delusions are made that much more difficult to swallow when they are followed up by laughably inept representations of inner turmoil or angst. Human history has produced millions of artists, of course, but only a handful of lasting impressions. As such, most of what meets our eyes, ears, and brains has been as disposable as the bubbling grease of a fast food kitchen; heartfelt, time-consuming, and even well-intentioned, but as impactful as the crayon ramblings of an autistic toddler. Effort is never enough, and if it were, wed be mandated to hang snot rags and excrement-soaked toilet paper in the Louvre.

Terry Zwigoff (Bad Santa, Ghost World) is just the man to tackle these ridiculous saps, as he has proven time and again that if somebody, somewhere wants to improve civilization, a huge fucking mess cannot be far behind. In the end, of course, art students really want fame, fortune, and sex, but admitting to such shallow goals might not endear them to joyless professors who blast societys ineptitude and depravity from the market-exempt comfort of their gated campuses. Whatever the motivation, Zwigoff sees little but posturing, preening, and pseudo-intellectual belligerence, as well as an almost instinctual drive to achieve recognition, damn the consequences. And if one must kill, or take credit for the killings of others, well, thats just another path on the road to immortality. Again, earth-shattering it is not, but as we careen ever closer to a broken, battered tumble down the jagged cliffs of a dying America, anything  a shout, a whisper, a pitiful gasp  that refuses to bow to even the smallest ember of belief in redemption is worth embracing with untold might.

Jerome (Max Minghella) is the particular art student we follow through the halls and classrooms of this fictional institution, and while he is the least reprehensible of the bunch  he actually seems to enjoy his craft  his outsized idealism makes him as much an object of ridicule as the stereotypes that wander about in his presence. And what about those one-dimensional shadings — are they irresponsible and unflattering? Of course they are, and they are no less accurate for their over-simplifications. For if life has taught me anything (other than the fact that I am likely to die with tartar sauce on my lips), it is that stereotypes remain defiantly, stubbornly true. Moreover, the very people who claim to be victims of the stereotypical lash are usually the ones who go out of their way to confirm that which they fight on a daily basis. To argue otherwise would be to grant human beings a complexity and level of depth that they have not earned, at least if history, truth, and the facts are to be our guide.

Ugly racism and the Holocaust were the result of stereotypical attitudes, but only because they evolved into hate, and eventually violence. This need not be the case, although most people  being insufficiently gifted in the gray matter department  cannot be trusted to keep stereotypes from descending into prejudicial behavior. As for me, well, I can be a misanthrope of the highest pedigree (and what does a misanthrope believe, after all, but that the whole of humanity is wretched and worthy only of death?) and yet move no further than my front porch. I hold no power, channel no influence, and the world will little notice my passing. So if I believe that it is axiomatic that Mexican culture is tacky, or that midgets are dictatorial creeps, what difference does it make? I have simply made a judgment based on the facts at my disposal, and have my experiences at flea markets and circuses to prove it. In the same way, each and every character in Art School Confidential who goes unexplored save the surface type is not the whole story, but enough of one to provoke a nod of recognition. And if were being honest, we all take comfort in the familiar.

So we have the career student who changes majors because hes scared to admit that he has no aptitude for anything at all. We are treated to the sexy feminist who screams with rage over being touched, then just as quickly buckles to tears and laughter, and then back again. And yes, theres the humorless lesbian, who sees patriarchy under every rock, yet fails to notice that Dead White Males dominate the curriculum because no one else legally had a voice during the time period being studied. And who gives a fuck about Native American transvestite poetry, anyway? Even the professor (John Malkovich, oozing his usual smarm) is the typical bastard who takes out his rage on students for reminding him of the potential he himself squandered. The hot chick who falls for the empty-headed beefcake (who turns out to be an undercover cop). The opportunist. The sensitive hippy who hates authority, yet gleefully cashes the checks that arrive every month from his affluent parents. The blacker-than-thou. The hipper-than-thou. The wide-eyed phonies who gush over obscure, impenetrable works because theyre obligated to do so. All exist; all are real. Its the world as Ive found it. 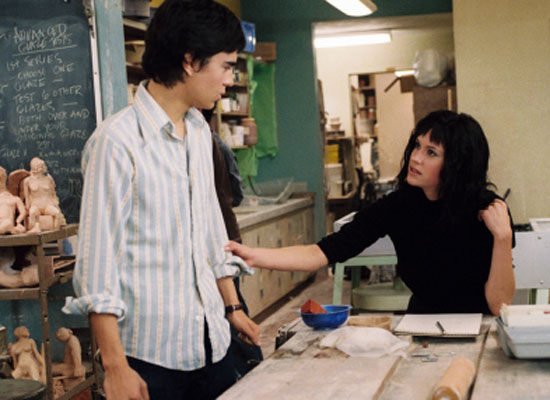 Standing above the din, though, is Jim Broadbent as Jimmy, a former art student himself who now wastes away in his filthy, dank apartment while shaking his fist at a world that long ago passed him by. He hates everything with a savagery that can only be endearing, and whenever he speaks, one is instantly taken to a world where, if it existed, would contain more pleasure and meaning in any random minute than most patches of real earth would in a lifetime. He wants to die, he wants you to die, and hes even resorted to strangling people hes deemed inferior for no other reason than to inspire macabre paintings. Hes yet another artist who believes that his gift entitles him to use, abuse, and murder for his pleasure, and given his perspective, I cannot disagree. Not everyone should hurt others to get ahead, but if a movie like The Godfather necessitated the deaths of thousands in order to leave the editing room intact, then humanity must stand aside with caps tipped. Zwigoff believes similarly, of course, for the greatest crime afoot is not the massacre of a half-dozen anonymous passersby, but the type of art community that leaves talent to rot in silence while idiot money-grubbers attain exhibitions and scholarships.

So yes, Jerome sells his soul for fames seduction, but only after attempting suicide due to a misplaced love for the only kind of woman a young lunkhead would ever fall for. He survives, takes Jimmys killings as his own (Jimmy conveniently dies in a fire Jerome accidentally starts), ends up in prison, and ushers in a new era where even the most insignificant sketch is bound to fetch thousands of dollars. Its a rushed, almost inane resolution to the story (admittedly, the second half is not as strong), but could just as likely be Jeromes fantasy. Its more indicting if the events unfold as presented, but either interpretation could be extracted. After all, infamy is the new fame, and when we exist among fellow homo-sapiens who receive a generous slab of airtime for little more than inhaling hot dogs or raping whores between lacrosse matches, it should be self-evident that societal impact long ago lost the race to “entertainment value” as the supreme good. Perhaps all we are left with is that people have no integrity, institutions of higher learning are sham diploma mills, and genuine talent left the building some decades ago. And yet, the bitter pill still goes pretty well with popcorn.