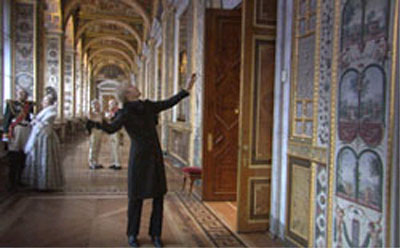 Matt preaches to the choir…

What: The film Russian Ark, directed by master filmmaker Alexander Sokurov, featuring a 95-minute, single, continuous, unbroken shot and an unofficial “tour” of the Hermitage Museum in St. Petersburg, Russia.

Who: You, the average American filmgoer.

Where: Cities and towns with an artistic bent, independent theater chains, and screens refusing to compete with The Hulk or The Matrix Reloaded.

Why: An oppurtunity to ponder Russian art, fashion, and architecture while analyzing czarist Russia in contrast with the Stalinist era; to marvel in cinematic risk and boldness; to admire the audacity of shooting a film in a single take; to think deeply while being blown away by beauty and glorious imagery.

Now get the fuck out of here and go watch Lord of the Rings for the 388th time.