RINGERS: LORD OF THE FANS

Ringers: Lord of the Fans is the most terrifying documentary ever made; a work of supreme horror so complete and off-putting that it would be impossible to imagine a more thorough examination of deep, unshakable mental illness in our midst. Needless to say, Christians are a more revolting lot as they affect policy and have definitive goals of conquest, but the devotees of fantasy who worship J.R.R. Tolkiens fictional work are equally pathetic, even if they rarely move beyond assorted basements, fan conventions, public parks and darkened movie theaters. After all, both sets of deluded souls worship the unreal, and have given their lives over to that which promises eternal rewards and supreme uplift, despite the fact that no object of their worship exists in the material world. Jesus is surely as much a fictional creation as Gandolf or Bilbo Baggins, and both seem to speak to a world where all physical limitations fall away in favor of brotherhood and peace. As such, the Jesus freak and the LARPer both remain passionately, childishly idealistic, as if human nature could be suspended forever in favor of harmony and unconditional love. Again, these Ringers are largely harmless, as not a one of them cares about politics, current events, or the upcoming election, although this makes them more infuriating as the only thing worse than someone too involved in the process is the citizen who voluntarily chooses to disengage.

But taken on their own, Ringers scare the living shit out of me, as they speak of fictional creatures with more tenderness and affection than members of their own family. Worst of all, this film treats their reverence with a great deal of respect, as if virginity, zit-ridden foreheads, and lives so empty that weeks and weeks can be lost to merely waiting in line, were in fact testaments to mans nobility. The opening scenes reek of that dreadful Monty Python animation that has always driven me nuts, and the annoyingly cheeky tone manages to get in a few licks of anti-intellectualism, as it bashes Harold Bloom and Edmund Wilson for having the temerity to call Tolkiens books juvenile trash. The literary giants are portrayed as snooty caricatures, which only feeds the Ringers sense of their own self-importance. And, as if it were an endorsement rather than yet another reason to avoid the books, it is mentioned that C.S. Lewis was a big fan, and he worked tirelessly to promote their alleged genius. Like Lewis, Tolkien has denied that his books were in any way allegorical, but whenever a work of literature speaks to great battles of good and evil, can it honestly be claimed that Gods glory is not being invoked? And even if Tolkiens books are not specifically Christian, they are mythology, which has, after all, the same motivations and goals as any mainstream religion. You may be bucking a slight trend by worshiping Hobbits and wizards rather than muscular Hebrew saviors, but you are still making shit up to explain the universe. God, Jesus, Buddha, Thor, or Frodo; its all the first and last refuge of the moron. 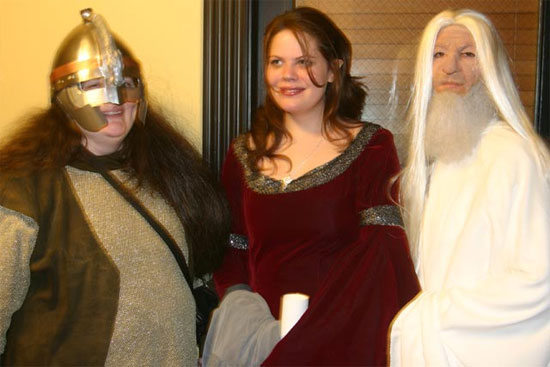 The documentary tells its alarming tale in several segments, all of which attempt to explain how the books have gained in popularity over the years. Of Hippies and Hobbits, for example, claims that the 1960s flower power generation revered the series, and that their peace and love ethic was a perfect match for the themes of friendship and interracial harmony promoted by Tolkien. To believe this documentary, talking trees and midgets with furry feet did more for that era than Vietnam and Civil Rights, which is either unspeakably sad, or the worst possible lie a cult could tell itself about its societal impact. We then move to Rock & Roll Rings, which shows how the world of rock music has been influenced by the stories, including Led Zeppelin, Rush, King Crimson, Yes, and Dio. We are also treated to a brief clip from Leonard Nimoys video accompaniment of the classic Bilbo Baggins, which is arguably worse than anything ever committed to vinyl. Oh, sorry, the video is actually worse. Even the legendary John Lennon wanted to film the books, which makes his murder years later that much sweeter. After all, he might still have entertained the idea, and given his performance art pieces with Yoko, we were surely spared a 28-hour all-nude version with only the buzzing of a fly on the soundtrack. It was claimed that David Lean, Stanley Kubrick, and John Boorman were offered the job, but well never know for certain.

Throughout these side trips into revisionist history, we hear confessionals from devoted fans. Among the obese, supremely unfuckable chicks and serial killers-in-waiting wearing Captain America costumes, we hear grown adults — presumably those who are fully in control of their faculties — talk about wanting to take vacations to Middle Earth, speak in Klingon about their affection for the world of Tolkien, and say of Frodo, He is, in a Jungian sense, a female role. Theres also a horrifically homely broad who, with what appears to be a fern on her head, waxes pathetic about her uncharacteristic wetness concerning the physical attributes of Orlando Bloom and Elijah Wood. Perhaps she is unaware that they are both undeniably gay, but that may not matter in the end. Chicks like that are always just a friend, and in this womans case, the friend that no one ever calls, unless of course she has a few spare hours during which she can type term papers for other, more attractive classmates. Ah yes, and what about the freak who relates to Pippin because he likes to speak to the forest and sit on the trees. If these nitwits only realized that before he died, Tolkien referred to his fans as deplorable cultists. Despite unleashing this unforgivable gibberish on the world, he at least understood what he hath wrought. 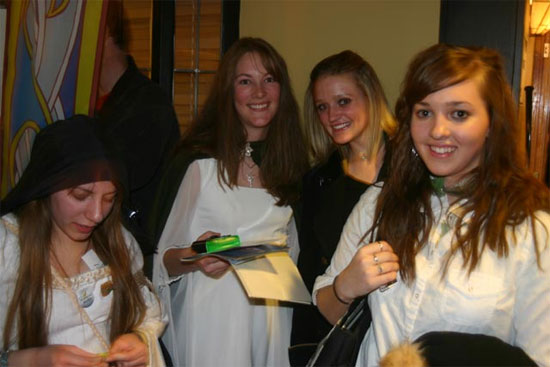 Ringers are also big on gatherings, parades, and Doo-Da Brigades, which appear to be mere excuses to dress up as trees and ramble embarrassingly about nature and green politics. Seeing the high concentration of Green Party representatives at events where people roll around on the ground in bizarre costumes is enough to keep me from voting for their ticket ever again. Unfortunately, caring for the environment and the cause of human rights run the risk of being affiliated with weirdos and other brain damaged mouth-breathers. At that point when Im feeling most liberal, I see shit like this and wonder if Im not completely full of crap myself. Still, I am comforted by the fact that for most Ringers, saving open spaces has less to do with a philosophical position than wanting to save potential sets for future movies, or possibly a retreat like Hobbiton, USA. Located north of San Francisco, Hobbiton is a spread of trails and lush natural habitats that also features Lord of the Rings statues and recordings. Given the level of worship involving these characters, one wonders if the park is forced to employ jizz artists, who clear the paths of all nerd seed.

Tolkiens books also helped spawn Dungeons & Dragons and other role-playing indulgences, which eventually led to the infamous cult of LARP. It might be tempting to dismiss these retreats into other identities as harmless cases of people who wish to preserve their childhood innocence and imagination, but actually living in other worlds and realties is advanced schizophrenia, not a cute and cuddly hobby. Unless you are being paid to be someone else, it is simply pathetic, and impossible to defend. Perhaps it is beyond obvious to say that anyone getting laid or having a shred of self-confidence would never resort to playing dress-up, but it remains an unavoidable fact of life. And when we meet a woman who maintains a web site devoted to the daily lives of motherfucking ACTION FIGURES, laughter and mirth must yield to fear and trembling. Anyone who would sell their house to travel to the world premiere of Return of the King is so beyond therapy that it can only be hoped that sooner rather than later, such a person is stripped of life in a terrible role-playing accident. Remember, these folks have started to infect the larger world, as the Frodo Lives virus is sent through the internet every September 22nd, the presumed birthday of Frodo. Indeed, brother, the sky is crying.