Rent is mediocrity in loud, jarring tones; a bizarre hodgepodge of painfully irrelevant numbers, preening narcissism, and self-righteousness so overbaked that I never decided who I hated the most. Every single character is a victim and hence, unsympathetic; more so because no one has anything else going for them. We have HIV-positive men, AIDS-stricken women, drug addicts, and unemployed artists-in-training, and all of them inhabit a Manhattan that is alarmingly closed and narrow. There is a world outside the hovel where these people rage against their illnesses, but one that exists only to persecute, point fingers, and stare in wide-eyed disbelief. These friends, all sad-sacks with self-pity carved deeply into their rotting flesh, sing with relish and joy, but only to remind others that they will not pay their rent, shall not take their medication, and have only love, passion, creativity and other self-deluding lies to share with the cruel, cruel world. Its the sort of musical where a drag queen skips down the street with Karl Malones doppelganger; where the bad guy is the one man who has the audacity to find work; and where one feels entitled to get huffy when a restaurant manager suggests that in order to spend four hours in his restaurant, you must actually purchase an item from the menu. Its all that and surely one of the years most unpleasant offerings.

The musical is now over a decade old, and it plays even worse in 2005. People are still dying of AIDS, of course, but the political activism surrounding the disease long ago faded from the headlines, largely because the virus now seems more preoccupied with Africa than choreographers and fashion designers. Years ago, it was almost hip to be afflicted with the disease (or at least wear a ribbon in recognition of its impact on the Hollywood community); now its simply something to die from, and hell, we have the bird flu to keep us up nights. Whats more, AIDS activists, as important as they were in an age when a homophobic president refused to believe there was such a thing, quickly became pushy and sanctimonious, as if unprotected sex in the park was imbued with a dignity all its own. For every shout-filled demonstration about an apathetic government and health community concerning treatments and cures, there were thousands of folks unwilling to admit that high-risk behavior might have consequences. My problem here, of course, is not homosexuality or even the politicization of AIDS, but rather the sort of arrogance that refuses to take responsibility and meet the other side half way in finding a solution. But like the characters in Rent, they moped around feeling sorry for themselves and wondered why the world stopped paying attention. AIDS is a horrible affliction, but its far worse for the body when coupled with stupefying boredom. 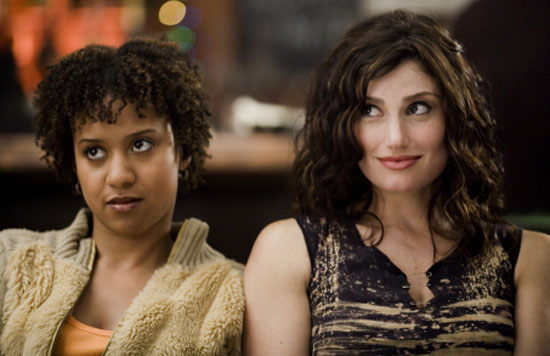 Think of these people, after all. Theres the budding filmmaker; the sort of clod who films every waking second, believing that somehow, history will be made in his cold, damp apartment. He wants to make a film his way, which is another way of saying that he wants someone else to pay for his artless indulgences. He hates that he is forced to sell out by taking a thankless job with a tabloid news program, but he fails to realize that perhaps now he can buy his own equipment and pay his bills for what must be the first time in his life. He feels dirty and soon quits, which means that near the end, we will catch glimpses of his masterpiece, which is nothing more than poorly edited clips of his equally vacuous friends doing what they do best — hogging the spotlight and demanding attention. The worst offender of all is the moral center of the piece, Angel, the aforementioned drag queen, who is an empty vessel with bad clothes, but is seen by others as the epitome of virtue. He struts around in bad wigs and garish attire, and cant conceive of a world without his presence. He stays true to himself and never compromises, which means that he feels entitled to dress like a cheap whore, beg you to stare at him, and yet judge you for noticing that hes different. Typically, he wants to have it all, so naturally he dies for our sins. No points for guessing that hes meant to symbolize Jesus Christ. Id agree to the terms, but few among us will be so accepting of a messiah who wears lace panties and sucks cocks under fading street lamps.

Theres also a performance artist, as there must be, who is protesting the sale of the building that currently houses the squatters in question. Her show, displayed in full, is arguably the most obnoxious single scene of the year; a witless parade of unspeakable crimes that would force even Miranda July to tip her goofy cap in deference. Her painful mix of cow noises, gesticulating arms, TV monitors, and flashing lights could only be topped in jaw-dropping idiocy by someone of Laurie Andersons ilk appearing on stage in a tub, up to her eyeballs in the menstrual blood of her ancestors, reciting the poetry of Sylvia Plath in an obscure Apache dialect. The all-gay crowd roared throughout this insipid display, but I imagine not out of derision, but rather understanding. This kind of shit still passes muster at performing arts schools across the country; where the more esoteric and impenetrable it is, the closer it resides to misunderstood genius. Naturally, the show leads to a riot, but not for the expected reasons. The evil friend who wants to sell the property is in attendance, and the cops he brought along to keep the peace get a bit rough and before you know it, bottles are being smashed on assorted heads. For once there is action that interrupts the horrendous singing, but its all too brief. 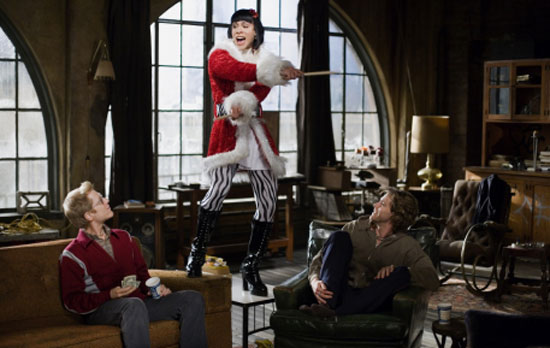 And so we beat on. Theres another endless number in a restaurant, where the kids band together in defense of the artistic life, which for them means staying defiantly unemployed while cranking out pitiful art. And I never thought Id hear a tune where Akira Kurosawa and AZT drugs were mentioned in the same breath. But arent they so wonderfully idealistic? Shouldnt we all long for a world where people can live free and do what they want without big, bad bullies to stand in their way? And heres where I part ways with the prevailing wisdom. Art is perhaps the one thing that makes life worth living, but I hate fucking artists with a white-hot passion. Perhaps that should be amended to say that I forgive abhorrent behavior when genuine talent is involved, but on this one issue, Ill risk a hasty generalization. So-called creative people make me absolutely ill, and no, not just because I myself lack any perceivable talent. As a group, artists detach themselves from the world, despite claiming to speak to deeper, more significant issues. What they really mean is that THEIR problems, THEIR issues, and THEIR pain are assumed to be shared by the world, and they equate autobiography with sociology or even history, when it would be best described as simple vanity. True artists work outside the self, even if the view on display is based largely on subjective experience. Still, havent we all met some deluded creep who wanted to take his home movies and present them to the world as some sort of creative act? Jonathan Caouette, the war criminal responsible for Tarnation, is the living example of this phenomenon. Somehow, it would have been fitting had little Jon been on board for Rent, given how much he embodies its perverted values. Take this to the bank, however: when he inevitably falls victim to AIDS, youd better believe that hell be there with camera in hand, chronicling his pain every step of the way.

Rents cult following was evidenced by the packed house at my screening, where the gay men were joined by the first-year performing arts students, most of whom were half-starved nitwits looking for a sing-along. Clearly this was a secret club: applause met character introductions, tears flowed, and cackling delight could be heard from every corner. The audience swayed and bumped to the soundtrack, as if the assumed community of the production had filtered down through the screen. It was impossible for me, of course, to connect with the material as presented, but the rest of the crowd acted as if each and every overwrought line was written exclusively for them. Surely this comes from the belief that one day, each and every one of them will be suffering for their gifts, when more than likely theyll be fighting off assholes at the local watering hole. In sum, Rent remains vital because it is one of the last, great explosions of theatrical populism. It speaks to the inner hack; where everyone who has had the desire, but not the corresponding ability, to speak to the world. As with Rent, so goes its followers — theyre talking only to each other.