So what went wrong? It’s a bit hard to say. I mean, I really don’t mind
the inconsistencies and holes. Like how the dragons are supposed to eat
ash but only eat living humans on screen or the fact that there isn’t
much of a story. No, the problem with this film is not that it’s a bad
movie, but that it isn’t a good, bad movie. Here are four key errors
made by the producers of Reign of Fire that contributed to the film’s inadequacy. 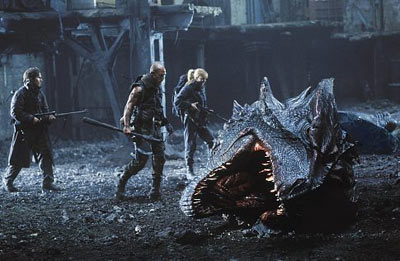 (1) The Slayer song, “Raining Blood” is not used even once during the
entire film. This is a flaw shared by most films, but here the sin is
unforgivable. Reign of Fire and “I shall reign in blood,” Slayer, and a
movie about dragons, it’s a perfect match. Imagine the first hints of
an impending dragon attack as we hear the beginning of main part of
“Raining Blood,” the part where the drums go, “bu – bu – bum. Bu – bu –
bum.” Then as the dragon comes over the hill, we hear that wicked fill
and opening riff. As the tempo picks up, the dragon unleashes a stream
of fire incinerating a church full of people. Talk about a missed
opportunity – this could have been one of the golden moments in the
history of cinema. No shit.

(2) This movie should have been directed by John Carpenter. Sure, the
man is a bit past his prime, but certain jobs require certain men. No
actor in history other than Bruce Campbell should or could have played
the role of Ash in the Evil Dead flicks. Rock n Roll High School
would have been a lesser film had it starred any band other than The
Ramones. When you make a movie about Dragons and men fighting it out in
a post apocalyptic future, you get John Carpenter to direct.

(3) The total absence of sexy wenches. You have dragons, you need sexy
wenches. Doesn’t matter if it’s the future, a parallel universe or an
animated kid’s film. This isn’t really rocket science. Dragons go with
heavy metal and sexy, submissive wenches. Nothing against Izabella
Scorupco. She had a relatively cool character, but where was the
revealing chain mail?

(4) Not enough Gore. The film makers should have taken a queue from Starship Troopers.
In fact, if John Carpenter was busy for some reason, Paul Verhoven
would have done a fine job with this film. The Dragons should have been
biting people in half and spraying blood all over the place. Limbs
should have been flying left and right. Intestines should have spilled.
Splatter me! Even the cleanly violence was rather infrequent.

I still enjoyed myself at times, but only because the premise of this
film is so cool that nothing could really ruin it for me. If I’m a big
shot in twenty years, I’ll have Carpenter or Verhoven do a remake.