WHEN NATURE ATTACKS, PART I – SQUIRM 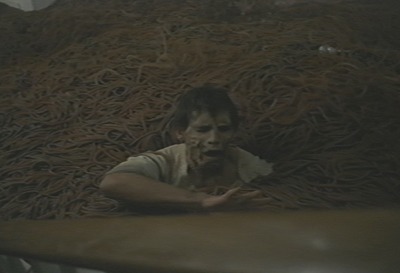 The opening crawl – ominous, spare, and all-too-revealing of a film lacking the budget to show rather than tell – speaks to a developing horror about to befall a small Southern town: “Late in the evening of September 29, 1975, an electrical storm struck the rural sea coast area of Georgia. Power lines, felled by high winds, sent hundreds of thousands of volts surging into the muddy ground, cutting off all electricity to the small, secluded town of Fly Creek.” At least that’s the official explanation. Following the random shots of wind-swept beaches and lightning strikes, a closer look reveals nature on the march. Worms, so often the butt of jokes and the ass-ends of fishing lines, are fed up. So fed up, in fact, that they’re screaming; fanged, deafening screams without benefit of mercy. Puffed and proud with murderous electricity, they’re no longer going to accept being rounded up by Willie, the local worm farmer who, it is said, is able to sell 100,000 worms for around $300. Given the lucrative nature of the trade, Willie is not about to bow to the newly obstinate creepy-crawlies. After all, Fly Creek is a town bustling with the dollars and cents of the well-traveled; visitors who arrive from all four corners of the earth to fish in muddy lakes, hunt for garbage passing as prized antiques, and briskly walk the empty, trash-strewn main street in search of a place to eat or even stay the night.

But there’s much more to the story than Willie’s worm farm. There’s sex and sin afoot in Fly Creek, and as with all matters of the flesh, God is expressing his opinion by ordering the natural world to seek and destroy the dirty fornicators among us. Within seconds of first glimpsing our dimwitted heroine, Geri, she is naked. Though showering at that moment, she is red-headed, hence loose and lustful; scrubbing her deviant body in anticipation of a gentleman caller, the more intellectual Northern boy, Mick. First, however, Geri is spied by the uni-browed town retard, Roger, who wants to fuck, but is savagely abused by Willie (his father), who wants the boy to inherit his worm empire. Suddenly, Geri’s mother wanders into the frame, speaking in the hushed tones of the truly wise. “I never saw such a storm,” she utters, with the honey-dipped dread of a typical Southern matriarch. “Somethin’ evil about it.” Because she’s from Dixie, she’s hopelessly paranoid and superstitious, but also in direct communication with the Almighty, and who better to distinguish this particular storm from the dozens of others that have ripped the region to pieces? God is not pleased with this Northern intruder, and his education and charm mask an insidious need to exploit Southern innocence. Mick’s cock will at last put down the dying embers of the Lost Cause. 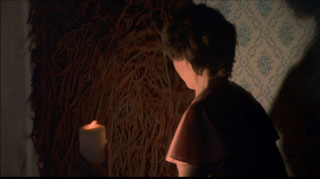 Still, this Southern town is a bastion of little but physical ugliness and rampant perversion. From Willie the worm farmer to the locals having coffee at the lone diner, all are unattractive, vile, and lacking in human decency. They are also obsessed with sex. Even the town’s sheriff, a flashy mess of teeth and hair, gropes every waitress and hill woman in sight, using his badge to intimidate the area’s weaker sex into surrendering their vaginas. Soon after Mick’s arrival, and his stated desires to bed Geri, the worms start to bite. The attacks don’t truly begin, however, until we meet Alma, Geri’s whorish sister, who is so beyond the pale that she keeps pot stashed in her bra. She all but throws Mick to the ground during their first meeting, which means that at some point in the narrative, she will strip naked, prepare for a bath, and be enveloped by a tidal wave of screeching, teeth-baring worms. In the meantime, skeletons are turning up in every nook and cranny of Fly Creek, and it takes Mick to break into the town’s dentist office, find the necessary x-rays, and identify a skull as belonging to Mr. Beardsley, the town’s huggable antique dealer. Were the worms responsible?

Before we can collect our thoughts, Mick and Geri decide to go fishing with Roger, who spends most of the boat trip grabbing at Geri’s ass. His sexual urges at last released, he’s punished most horribly by falling into the lake, popping up to reveal a face covered with gnawing worms. They’ve even managed to grind under the skin, adding to Roger’s unholy pain. He runs off to the swamp, leaving Geri to swim through the same body of water unharmed. Would she be spared? She hasn’t yet acted on her lust, so there might be time. Seemingly unconcerned with Roger’s ear-splitting cries, Geri returns home to a delicious meal prepared by her increasingly psychotic mother. “Lord knows when the last time we had two hungry men around here,” she hisses, still believing Roger will heal in time for supper. Mom is at the breaking point, heaving and panting with sexual repression, so it stands to reason that during the meal, a massive tree will hit the house, opening up a giant hole through which the true wrath of God will enter. The worms have killed Willie and sent Roger into hysterics, but now they will hit with full force. But only at night. The light of day, the light of righteousness, will keep them at bay. 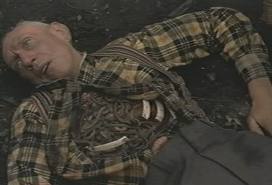 As the worms descend upon the shattered mansion, the sheriff seals his own fate with a jailhouse orgy. Glowing with post-coital bliss, worms rain down from the ceiling, enveloping our nasty couple with pounds of spaghetti-like blobs. More young people, surely thinking about sex, are consumed in the diner, the last holdout a jiggling tart atop the counter. Because the worms only kill in the darkness, Mick decides to get some wood before the sun sets to plug the house’s holes. While gathering scraps, he is attacked by Roger, who is not only alive, but more powerful than ever. Wasn’t he the worst offender of all? Why would he live? Apparently, God has seen fit to turn Roger into an actual worm, and he is only made stronger by his contact with the slimy creatures. Even when he is tossed into a massive pile of worms, he sinks to the bottom, only to slither out and up the stairs, where he bites Mick’s leg. Whom gods destroy, they first make worms, or something of that sort. Mick and Geri climb out a bedroom window, Alma, from all appearances, is overwhelmed by mountains of worm, and poor mama is devoured as she knits away her last bit of sanity. Through it all, the close-ups reveal a fevered roar of mindless destruction that will pause only when electricity is restored to the town, and that downed power line unplugged from the wet earth. And so they are, but as the credits roll, the camera pans to the teeming ground, where who knows what will stand at the ready, waiting yet again for clothing to hit the floor.

God hates sex, and he’s plum out of locusts.

Not a soul, unless you want to count Don Scardino. (Have you done Law & Order, Rescue Me, and 30 Rock?)

HUMAN DEATH WORTH THE PRICE OF ADMISSION:

Poor mama, eaten down to the bone by worms, yet has the presence of mind to finish knitting her shawl.

DOES A LOCAL ECCENTRIC SOUND THE ALARM BELL?

Roger is retarded. And ugly. And aroused. Ignore him at your peril.

WHAT ABOUT DISBELIEVING LAW ENFORCEMENT?

Menacing with those girlish screams and fangs, but get them together, and they resemble a pasta dish.