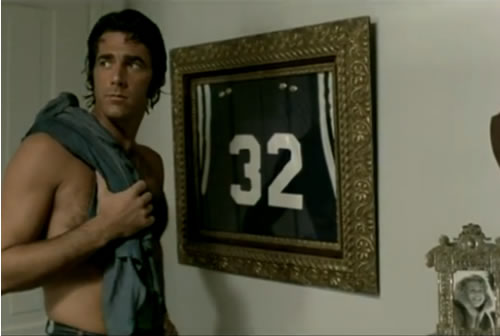 Jason Crockett is a dick. Played by Ray Milland, only 27 years removed from the Oscar-winning The Lost Weekend, Crockett wastes away in his wheelchair, impotent yet dictatorial, commanding what remains of his family to celebrate the nation’s birthday with all the solemnity and grace the moment requires. It is the 4th of July weekend, and Crockett’s brood – the epitome of the alcoholic idle rich – have gathered for their annual tribute to God, country, and grandfather’s glory, though not necessarily in that order. As the festivities are barely underway, Pickett Smith, a photographer on assignment for an ecology magazine, shows up to ask questions. Needless to say, he is portrayed by a young, brash, moustache-free Sam Elliott, and by the 14-minute mark, he is already shirtless. He is instantly a thorn in Crockett’s side, largely because he knows about the pollution in the swamp (Smith has numerous shots of waste, trash, and soda cans in the area), but he is also there to seduce Crockett’s graddaughter, Karen, played by Joan Van Ark as if channeling the body of a 12-year-old boy. “I nearly came to your room last night,” she moans, which prompts Big Sam to crack, “So why didn’t you?”, and move on to other business. The world’s most masculine human being, against the odds, started here, surrounded by frogs, toads, snakes, and giant turtles.

Pollution. Man’s pollution. That’s why Smith is here, and it’s also why the frogs have descended upon Crockett’s estate with greater force than usual. “They really do keep us up at night,” the snooty Jenny offers later that day, as if their croaks are specifically designed to inconvenience her. Still, no one seems overly alarmed, and a servant even offers to pour oil into the swamp to flush them out. Smith is no dummy, though – he saw the pesticide cans littering the swamp, as well as the dead birds and lizards. After being enlisted by Crockett to find the absentminded Grover, who was hired to kill the frogs, Smith walks around the estate, eventually locating the poor man, face down and covered by snakes. The death is quickly covered up, as Crockett, for the first of at least two dozen times, insists that the day’s schedule not be interrupted. Patriotic music is played, food is prepared, and the kids are dressed up in their Sunday best. America will be honored! As if to underline that fact that no, this weekend will not go as planned, the movie cuts away to croaking frogs again and again and again. They are pissed, and they’re coming for Crockett.

After coming across frogs the size of frying pans, Smith asks, “What if nature were trying to get back at us?” Nonsense, Crockett argues, insisting that man is master of the world, and pesky regulations are just that – irritants that must be ignored and exploited to keep the money coming in. Even after a snake invades the dining room, prompting Crockett to pull out a pistol and gun it down, he roars for obedience. Dinner near ready, Smith wanders off again, as does everyone else, ensuring a tidal wave of death scenes. Michael, one of Crockett’s dupes, drives out to a clearing, shoots some birds, and promptly falls down, putting a bullet in his own leg. Within seconds, he is attacked by moss and tufts of grass, leading to a particularly nasty spider bite. He dies instantly. Kenneth, the man with the audacity to sleep with a black woman, is surrounded by lizards in the greenhouse, and dies of asphyxiation after the little shits knock over bottles of poison. They also block the door to prevent his escape. And then there is the plight of crazy Aunt Iris, the butterfly collector. Her demise is given the most screen time, as she wanders aimlessly through the swamp, only to be cut to ribbons by branches. She also falls in a puddle and?is attacked by leeches, only to fall down again and suffer a lethal snake bite. Within fifteen seconds, she has turned blue. Oh yes, and let us not forget about Stewart, the Anwar Sadat double, who, while looking for Iris, is attacked by alligators. After what appears to be a decent wrestling match, Stewart relents and is carried away in a lifeless heap.

Despite these grisly deaths, Crockett wants the band to play on, and even spits, “Just because of one small crisis, you want to run?” It’s here that the movie’s message fully takes shape. Sure, this is a Rachel Carson-inspired warning about the dangers of DDT and the greed of wealthy industrialists, but more than that, it’s a metaphor for Vietnam. Crockett, ever the President Nixon stand in, refuses to be that man who abandoned the mission. The frogs – Vietcong, hippies, and anti-war beatniks all rolled into one – are in pursuit, but he’ll remain the last one standing if that’s what it takes. “You’re with me or against me!”, he cries, downing whiskey after whiskey as if hell bent on destroying the whole fucking swamp in order to save it. Even when the dirty frogs jump all over the American flag cake, Crockett is defiant. He discharges his kitchen staff (foreshadowing the?Haldeman, Ehrlichman, and Dean firings to come as Watergate breaks), barks orders, and insists that he’ll blast away every last creature if it means preserving his honor. As the subtext grows in significance, we even begin to wonder if the lethal toxins from the greenhouse could be Agent Orange.

Eventually, even Smith (Kissinger) has had enough, and he bails with tots and tart in tow. The escape allows for yet another image of a shirtless Sam, and you haven’t really lived until you’ve seen him battle a tsunami of sea snakes with an oar. He also shoots a rabid alligator (fun fact: when shot, gators release cherry Kool-Aid). Hysterical yet controlled, Smith takes his new family to the road, where he flags down a cheerful young woman who is happy to give them all a ride, even though Smith is soaked to the bone, frantic, and carrying a shotgun. Back at the White House, Crockett drinks, listens to military marches, and fights off madness. The phone rings, yet no one is there. The frogs eventually break the glass, attack on all fronts, and cause the old man to suffer a heart attack. When we last see him, he is face down, covered by frogs, and stone dead. As a final insult, the lights go out. The war has been lost, many have died unnecessarily, but he stayed a man until his final breath. It remains to be seen whether the frogs have actually won. Maybe for now, but there will be other Crocketts. Forever and always.

Rich bastard poisons the creatures of the land and sea, leading to a particularly nasty revenge.

President Nixon kills millions and?destroys a country, all because he can’t have sex.

HUMAN DEATH WORTH THE PRICE OF ADMISSION:

DOES A LOCAL ECCENTRIC SOUND THE ALARM BELL?

You willing to call Sam Fucking Elliott an eccentric?

WHAT ABOUT DISBELIEVING LAW ENFORCEMENT?

Just this family, just this one estate, though the island’s ultimate authority thinks little of turtles capable of tearing women apart.

Curiously, the frogs are more like pied pipers, as they do not actually harm any human beings. Those fucking snakes, though, are tough sumbitches. And who wouldn’t admire a lizard with the intelligence to produce a lethal gas?