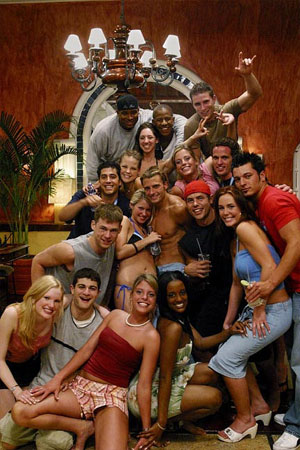 Matt Cale has an iron stomach…

“Youth is wasted on the young.”
-George Bernard Shaw

Fine, it’s a bit pretentious to begin a review of an MTV movie with
a quote from one of the world’s most famous playwrights, but that’s the
mood I’m in after such a depressing experience. After spending nearly
100 minutes with some of the most vapid, sub-mental cretins in the
history of the screen, it either is retreat into a world of literature,
philosophy, and great minds, or take a long, scalding shower with the
help of a wire brush and a freshly unwrapped razor blade. I escaped
this open wound in theaters, although I had been tempted at the
time to witness its horrors. I even ignored it for months after its
video release, thinking that I would never have to explain to readers
why I didn’t have anything better to do than watch people engage in
behavior that would be offensive and embarrassing to the lockdown ward
of a mental hospital. And was I really in the mood for an MTV
production so soon after enduring two full episodes of Rich Girls?
What the fuck is wrong with me? What part of my sick soul needs to view
the mating rituals and endless alcohol intake of assorted
twenty-nothings? I knew what I was about to witness and I knew I would
hate every minute of it, yet I plunked down my cash and rented the
fucker. I simply had no choice. 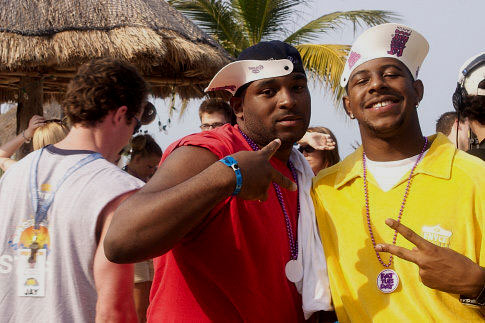 As expected, The Real Cancun gathers various “types” to
spend some time together (in this case, a week) in a rented house and
(hopefully) fight, fuck, and hurt each other’s feelings. There’s the
resident virgin, the stud, the blacker-than-thou chick, the mack-daddy,
the good girl from the Midwest, the good boy who doesn’t drink, and a
few others who act as window dressing. No one has any real autonomy in
a movie like this, even though it claims to be “reality.” No one who
auditions for such a thing has anything less than ambitions to be a
Hollywood star, so everyone does as expected, cries on cue, and creates
conflict where there isn’t any. Of course, there’s a girl who has a
boyfriend back home who sleeps with the stud, who of course drops her
ass for two more women before the week is up. She acts upset, broods
for a few days, then tells him off by saying that he doesn’t even come
close to measuring up to her man back home, who is said to treat her
like a princess. The geeky boy who vows never to drink alcohol ends up
being the biggest lush of all, becoming addicted to body shots and
downing tequila with the gusto of a frat pledge. And of course (sigh),
the wannabe Queen black woman teases the mack-daddy, leading him to
bang someone else, which makes her mad, which is just the right emotion
for leading to their own assignation in the sheets. Given that all of
this could have been handled in under an hour (if not 15 minutes), I’m
not sure why we were made to suffer as long we did. How many times do
we need to see young scum pump their fists, shout to see hooters, and
shake their asses in “best bodies” contests? Thank goodness Snoop Dogg
was around for credibility.

The only justice served was having the dickhead who kept
repeating “Does someone wanna make out with me?” not get any action
whatsoever. Not even the unbridled hedonism of a Cancun Spring Break
could get this loser laid. But enough undeserving pricks did get their
namesakes wet, and that alone is enough to depress a viewer like
myself. I too would have liked to at one point seen nubile, perky
breasts as a young man, if only I could have figured out a way for them
to be delivered to my musty bedroom where I spent my weekends reading
obscure history and plotting the deaths of my physical and social
betters. Because I can’t imagine ever setting foot on a beach, let
alone one packed with rioting, inebriated young people, a film like The Real Cancun makes about as much sense to me as Baise-Moi
would to Bob Dole. When I watch these kids in Mexico partying and such,
I feel old and impotent and terrifically unattractive. Still, that is
why movies like this are made — to make us feel superior and inferior
all at the same time. I would never have the will or the desire to
achieve the sort of body featured by one of these clowns, so I envy the
skill of someone being able to flash a bicep and have some hottie
sucking his joint by the next frame. Yet I am also privy to the least
interesting conversations between upright animals I have ever heard,
and I am once again secure in my intellectual snobbery and ability to
read two consecutive pages of even the most rudimentary text. But these
are folks who prize the orgasm above all else, largely because it is
the only sensation they could possibly understand. 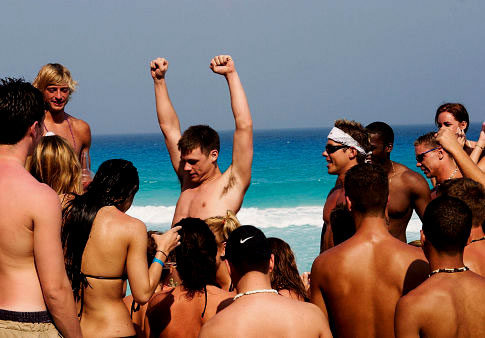 At any rate, The Real Cancun is not sexy enough to get
excited about, nor is it trashy enough to rate as a guilty pleasure.
Instead, it is a colossal bore and features nothing that hasn’t been
done over and over again with a lesser budget. It won’t shock anyone to
learn that beach resorts in Mexico are known for their sex, music, and
alcohol intake, so all of this seems a bit late to the game. Such a
film might have acted as an expose of “unbridled youth” in the late
1950s, but I can’t imagine that there is one person left on the planet
who does not understand that college students are second only to
unrepentant child molesters in their threat to decency and order. No
one is asking that these dullards take Proust along to a nightclub, but
that begs the question of why our culture continues to produce
voyeuristic garbage without taking it further. I have nothing against
exploitive trash, but it is not enough anymore to watch the same
arguments with the same accusations lead to the same hook-ups. Why not
toss in a gang rape? Or a mutilation? Or better yet, why not have
several members of the house plot against the biggest creep and murder
him in his bed? Or conduct a lynching? Or a ritualistic sacrifice of
the Midwestern virgin? Unless these pinheads start dying with
unparalleled terror, I refuse to watch ever again.

(Number of days it will take to break the pledge I made in the last sentence: 2)