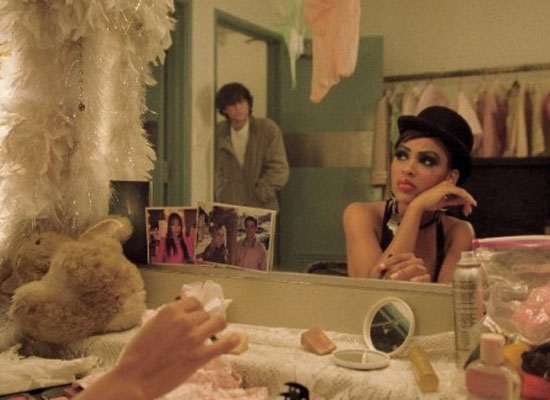 I love film noir. To experience its world-weary cynicism, dark hues, and snappy dialogue is to enter a world both artificial and rich with relevance. The genres back-stabbing dames, sad-sack loners, and larger-than-life villains speak to a life lived where everything, including time itself, has run out. Because of my reverence for the brilliance and nastiness of the 1940s and early 1950s, it hurts me deeply to see it defiled; reduced to a cheap ploy or exercise in style that might hum along, scanning a crib sheet from time to time, without having earned the chops to be so bold. Brick, the truly appalling and consciously offensive slaughterhouse from some unholy bastard named Rian Johnson, is the ultimate work of contempt; a Bugsy Malone-style romp that has the movement and flow of the classic noir of old, but asks us to sit tight while fresh-faced innocents and mere children bark the staccato rhythms with alleged conviction. Johnsons failure is so grand, in fact, that it just might be the most outrageous stunt since Ted Turner colorized Casablanca.

Lets begin with the most obvious transgression against good sense, the casting of Lukas Haas as The Pin, a drug lord who rules the San Clemente streets with an iron fist, peach-fuzz chin, and goose head cane. The moment he arrives on camera, all thoughts turn to unbridled hysterics, and about the time we see him sprawled out behind a desk, muscled goon at his side, we throw up our hands and hope to fuck its a parody. Alas, I think Johnson is serious, at least in his attempt to resurrect a long-dead style of filmmaking; only this time setting its story of betrayal and death in and near a suburban high school. Its safe to assume that Gary Coleman and Emmanuel Lewis were both unavailable to play Gary Trueman, the rock-like vice-principal whose role was eventually filled by Richard Roundtree.

But back to Haas  he wanders about, limping, with a long black coat covering his gnarly frame. He deals drugs, you see, and is so powerful that he has football players and chicks alike doing his bidding. He still lives at home, though, which makes sense as he still resembles the little Amish boy from Witness, only uglier. When I could understand what he was saying (the dialogue swings and jabs between the self-aware and the incoherently self-aware), he was so ridiculous and unbelievable that he nearly became a tragic figure. My mind raced  is this kid serious? Am I being fucked with? Should I retreat to the lobby and slug the popcorn guy? 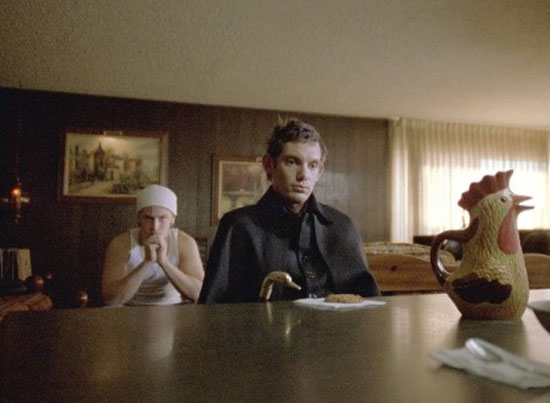 The anti-hero at the center, though, is Brendan (Joseph Gordon-Levitt), a shaggy-haired young monkey who gets a strange, frantic call from his
ex-girlfriend Emily (Emilie de Ravin). She says shes been a bad girl, and when she turns up missing, the story is set in motion. Enter The Brain (Matt OLeary), the standard all-seeing, all-knowing character who pops up from time to time with names, addresses, and decoded messages that help Brendan solve the mystery. From what he can tell, Emily got mixed up with some bad dudes (including The Pin), and she might be facing a dark future. Several days later, she turns up dead; the victim of a murder that is somehow tied to drugs, dames, and a black chick who quite literally has guys falling at her feet (one of many unexplained quirks that are better left unexplored). Brendan, as all noir protagonists must, drives around, finds himself in mysterious rooms, and meets up with hostile forces that would rather have him go away and stay gone, you dig? And what about this brick, which is obviously drugs, but has somehow led to violence? Was it spiked? And is someone skimming off the top?

Thrown into the mix is a wife beater-wearing idiot named Tug (Noah Fleiss), the sort of knucklehead who throws a lot of punches and chatters nervously while holding a cigarette. Needless to say, his role as The Pins main man is conflicted by his connection to Emily, and before long, well hear about a pregnancy and jealous rage. Such anger will spill over, of
course, into a hasty murder at the scene of Emilys death, which is filmed with a stylistic flourish, but cant be accepted at face value given the age of the participants. Honestly, what was objectively a well-made film (many of the shots are lovely and nicely framed) never recovered from the opening scenes.

After all, Shakespeare is always brilliant and among the finest literature ever written, but imagine the difference between Oliviers Richard III and that of your average high school freshman. If you believe there is no difference (or at least there shouldnt be), then Brick just might be the movie experience for you. But tread lightly in this modern noir, as the dude from Third Rock from the Sun is no Bogey. For if noir is to mean anything, the haunting eyes and lined faces must stem from hard travels, long roads, and a shoot-em-up or two, not school bus rides and staying up late doing homework.

The character responsible for Emilys death is exactly who we suspect it to be, which is hardly a crushing blow, as most noirs show their hand at some point in the story. Noir isnt necessarily about surprises or tricks, but an overall attitude  the world is fucked and were all hopelessly trying to stay afloat. Im corrupt, the worlds a sewer, and sex, money, and power will drive us all to an early grave. Nothing is ever done with nobility and selflessness in mind, and even if we survive this round, theres someone around the corner waiting to steal what weve got. In Brick, though, the same sense of futility is undermined by the thought that even if life sucks right now, these punks can always go away to college and start anew.

Interestingly, we only see one parental figure, which might be a commentary on the kids today and what they are apt to do without guidance and supervision, but Id rather believe that the adults took the fuck off once they realized a pussy like Lukas Haas could run the neighborhood. I have no doubt that as they packed their suitcases for their ride out of Dodge, they wiped away tears of laughter and sped away rolling their eyes. After all, what would you do if your teenage brat started speaking like a gumshoe with cool to burn?

Balls of indefatigable steel were obviously required for this project, and I guess I can tip my cap to Mr. Johnson for openly shitting on sacred ground. Hes not trying to get away with anything; simply the notion that hes the most likely candidate to pitch an all-midget basketball league or museum for the blind. Its high camp, though ill-conceived, and unlike most laugh riots of this sort, its not something Id ever like to see again. The sense of identification required for a film like this evaporates upon impact, and we wait the whole thing out to see if Haas is going to wake up with a start, soaked in sweat and urine, and instantly depressed that his tough guy act
was but a dream.

Nothing rings true  nothing could ring anything but hollow, desperate, and false  and all that Im left with is a sore back and less money in my wallet. Once again, I thank the so-called independent film scene for taking me by the lapels, promising a good show, and leaving me bitter and ashamed. Increasingly, I turn to the gutter tripe of Hollywood to set me free, where the expectations are low, the dialogue secondary to the pyrotechnics, and the teenagers loud, boorish, and dead. After all, theyre far too inarticulate to speak in any fashion whatsoever. They know their place and whats more, Im fine with that.