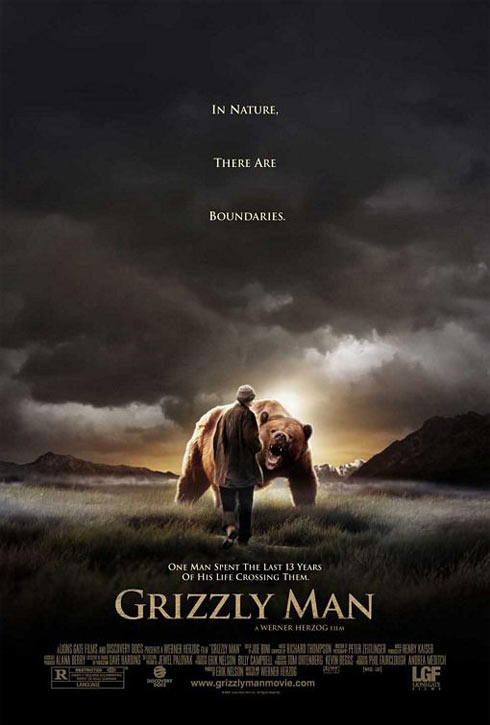 (From the Editor: Republished due to this question on Quora)

GRIZZLY MAN What is this guy’s batting average? For more than forty years Bavarian “Madman” Werner Herzog has made excellent film after exceptional film after monumental film after epochal film. And his latest, Grizzly Man, the depraved, ecstatic story of another certified madman–Timothy Treadwell–is possibly his best to date. Simply incredible. We’ll return to Herzog in a bit; let’s acquaint you with Mr. Treadwell. Every summer for thirteen years he went unarmed into the Alaskan back country and lived among grizzly bears, filming them for the last five. However, he didn’t live among them like you might think. You know how Jane Goodall got down and dirty with her chimps? This crazy fucker did the same thing with GRIZZLY BEARS! For reals, he would walk up to the beasts and stick his finger in their faces, proclaiming over and over again, “I love you, Mr. Brown. I love you! I love you!” Even more unsettling was the fact that in October of 2003, Tim and his girlfriend Amie Huguenard were discovered dead, maimed and mostly-eaten by a grizzly (click here). Herzog “found” the footage that Treadwell had shot for the last five summers of his life (declaring to producer Erik Nelson in his thick German accent, “I will direct this movie” and then extending his arms out to the man, who grasped them, sealing the deal) and like Werner is wont to do, injected himself and his beliefs into an already mind-blowing story. Luckily for us, Herzog is not only the greatest living director (and I say he rivals the dead), but the man is a philosopher in the best sense of the word. Plus, it is a compelling treat to listen to Herzog speak and he narrates the entire film. Herzog is of course after the why of a given event. Not the how. The resulting film is a masterpiece unlike anything else you will see released this year. Or next. 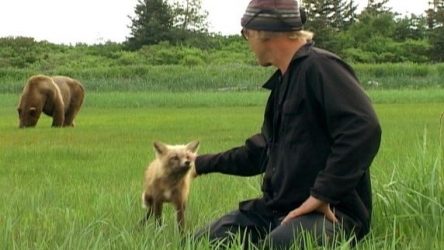 Early on in the film, Treadwell’s behavior is characterized as being disrespectful. Highlighting this, Herzog travels to an Inuit Museum where “tourists” — one of Herzog’s pet peeves — have cut the paw off a ten-foot tall stuffed grizzly. The curator of the museum, who is a native Inuit, explains that for seven-thousand years, his people have lived in peace with the maneaters by respecting the grizzly’s space. And vise-versa. Treadwell, in his essentially reckless behavior has crossed a line; gone over a border that no human should expect to travel beyond and then live to return from. However, he is clearly not living with the bears out of an exploitative sense; he is not a poacher or anything remotely resembling that and this must be noted. Treadwell is genuine and quite movingly heartfelt about his love of the grizzly bears and his obsession to protect them from harm and educate the world at large about their plight. So enthused is he that at one point he films a bear taking a dump and with childlike softness and joy, walks over to the still steaming feces, puts his hand in it and starts proclaiming, “this was inside of her! And it came out of her butt! I can feel it, I can feel it! This poop was inside of her!” Gross, of course, but only a blind person could not see that behind his sickness lay a true love for the creatures. But his obsession is not normal. On the one hand it is comical, for Treadwell has a bowl cut, a voice higher than Mike Tyson’s and is constantly reminding vicious half-ton animals that have evolved to only kill and eat as much as possible that he loves them. On the other, it is tragic. Monumentally tragic, for the world is only moved and made worthwhile by driven, obsessed men; sadly Treadwell’s obsession was fatal. Those of you familiar with Herzog know that he himself has a love/hate relationship with nature. As a Bavarian, he is instinctively drawn to it and uses and exploits the natural world as much as possible for his work. Of course, in a scene used in both Burden of Dreams and My Best Fiend, he states, “Nature is the harmony of mass-murder.” Treadwell did not understand the later part. 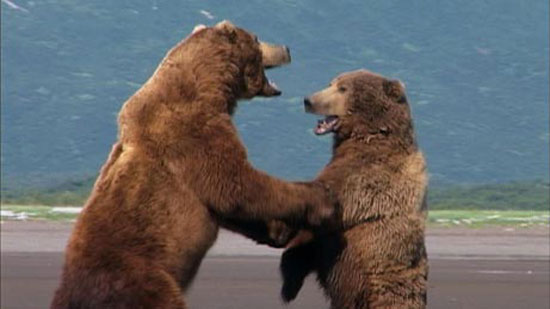 As compelling as the main thrust of the plot, was the dueling film-within-a-film that occurred during the course of Grizzly Man. All of the grizzly footage in the movie was shot by Treadwell himself (with the exception of a single scene shot by Huguenard). Herzog’s job was to edit it and narrate, as well as to interview those who knew Treadwell and some others with opinions about Timothy’s controversial activities. Yes friends, a film class by Werner Herzog is yours for just the price of admission! Herzog states assertively that he considers Treadwell a top notch filmmaker, saying that Treadwell was capable of staging shots that, “studio directors and their union production crews could never even conceive of.” Of course, he’s right. One shot in the film that leaps to mind and really is a work of art goes down like this; Treadwell has two cameras and he has decided to put one on a tripod and capture himself running down a hill holding the other camera as if he is in pursuit of a bear. He sets the camera and climbs up the hill until he is off screen. As soon as Tim has cleared out, the plants seem to come alive and begin passionately stirring in the wind. It was gorgeous. This happens for a good fifteen seconds. And then, like an even crazier Crocodile Hunter comes Treadwell tearing down the path. I think we, as audience members, are lucky in the extreme that an editor with Herzog’s gifts and patience got a hold of the footage, for 99 out of 100 times, the vegetation would have been sentenced to the cutting room floor. In another shot that is perhaps even more beautiful, Treadwell is talking about (and to) a bear that is foraging behind him. Suddenly, just when a normal director might yell cut or get up to turn off the camera, a family of foxes (Treadwell hangs out with and names all the foxes, too, of course) runs across the screen. He calls them over and they come and there is Timothy; petting a wild fox while a grizzly bear lopes around behind him. It is a scene of such shocking tenderness that I was left reeling. For even though Treadwell is obviously quite out of his fucking mind, his heart is absolutely and without question in the exact right place. And Herzog perfectly understands this. 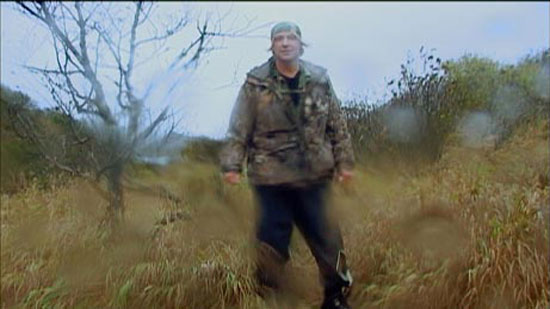 So? What kind of a person would devote his life — for no pay — to living with grizzly bears? Not who you would think. Growing up in Long Island, Treadwell was a failed collegiate diver turned failed Hollywood actor turned successful drunk. As he explains to the camera, he made a deal with the grizzlies that if he will protect them from humans, they must save him from the drink. He knew nothing of the reality in which he traveled in so often. Nothing of the bears biology, of the harshness of the environment, the customs and beliefs of the locals — nothing. He simply loved the giant things. Too much. And yes, after watching nearly two hours of “his” bears going about their business and almost hanging out with Treadwell, a seductive anthropomorphism manifested itself to me. Golly gee willikers, those big fluffy bears are awfully cute! And when they stand up, they even look like us! There is a particularly fascinating scene where we watch these two males wrestle each other over the right to mate with a female. Extremely human looking. In the aftermath, Treadwell plops himself down next to the defeated bear and begins conversing with it about women and how difficult they are. Unbelievable! Could this actually be real? Was I in fact watching The Bear Witch Project? Treadwell, we soon learn, was just divorced from reality. He refused to accept nature on nature’s terms. He performed a eulogy for a dead fox cub that was killed and eaten by wolves. During a bad drought, the bears began eating their cubs — something which they have to do to ensure survival — and Treadwell was beside himself when he discovered a cub’s skull. So much so that he tried to build a channel in the river to let salmon through. When that failed, he began praying for rain, demanding, “Come on Jesus-dude! Come on Christ-man. Come on Allah… come on floatie Hindu-guy, LET’S SEE SOME RAIN!” And I’ll be damned if it didn’t start raining. 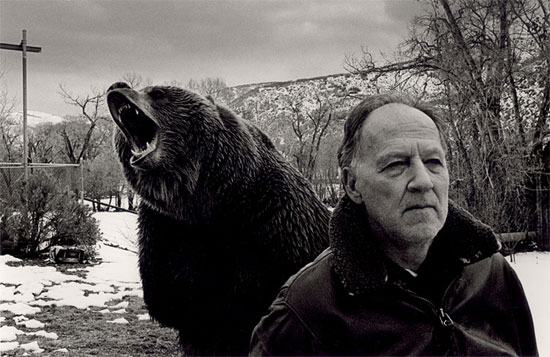 The film, ultimately, belongs to both Treadwell and Herzog. For while Treadwell clearly had his agenda (for the last two summers he was in Alaska, Amie was with him. Yet he went on and on about how isolated and alone he was), and Herzog, well, he always has his. In one of the most powerful scenes that Treadwell shot — and one that was clearly never meant to be seen by other humans — he descends into a Kinski-esq rave about the park service, spitting NWA-worthy bits like, “Fuck you, motherfucking park service!” all the while flipping off and jerking off at the camera. Herzog mentions that he is used to actors who behave in this way. I must point out that the theater was in hysterics at that line. Another of the best bits of the film happens when Herzog is with Jewel Palovak, Treadwell’s ex-girlfriend and partner in their conservation project Grizzly People. Like Treadwell, reality is not her strong suit. However, she happens to have the audiotape of the attack that killed Timothy and Amie. Apparently, the camera was running with the lens cap in place. Through headphones, Herzog listens to a minute of it. Visible are his fingers convulsing against his face in shocked, dismayed horror. He tells her to turn off the tape, and in his best Bavarian/Fascist voice demands, “Jewel, you must never listen to this!” She (and really the entire audience) breaks down in tears as Herzog further commands that she destroy the tape, for it will always be “the white elephant” in her bedroom. In the production notes for the film, Herzog claims that even though both he and Jewel had quit smoking years earlier, that moment was so powerful that they had to go outside and have a cigarette. I really cannot explain properly how brutal and wrenching this scene is. My words are inadequate. And finally we have a few of Timothy’s friends (including Jewel) go and scatter his ashes over the place he loved so dearly. Big Lebowski references aside, what became immediately apparent was that their grieving and attempt at closure over the departed Treadwell, was as futile, insignificant and ultimately ridiculous as his mourning over a dead fox. Mother nature is a real bitch.