COP AND A HALF 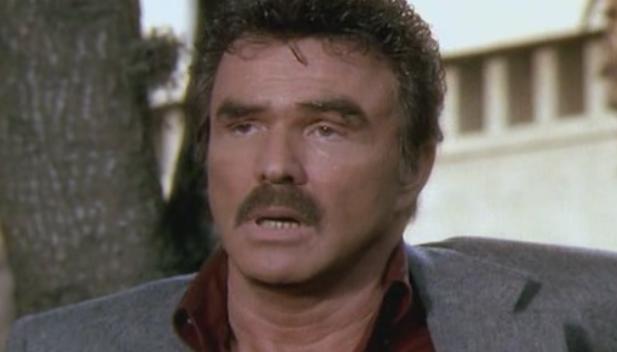 There are not, nor can there ever be, enough words written about Burt Reynolds’ mustache. You can search the annals of the innernet and will always come up thirsty for more sentences devoted to that angelic crecent which hypnotizes all who gaze upon it. Righting or should I say writing that cosmic injustice is an obligation my spirit will never escape. I did not elect this charge for it elected me. I’m imprisoned to express my endless love for the way his nose hairs tumble out of his nostrils and seamlessly blend into the rest of that furiously kempt model of machismo resting above his lip. And the way the ends, or should I say edges (for there is no end to something eternal) taper into perfectly triangular pinnacles collapsing over the corners of his grin make me want to unremember all that was before. It is here I die. No woman could deny its pull. No man its glory. It would make every beast of the field rebel against master and nature alike. Rick Moranis could shrink a hundred kids and banish them into those coarse, thick stalks of wonder and they would soon forget their modern lives, content to dwell in a follicle forested utopia, reserved for the holiest of holies.

Ok, glad I got that out of my system. Now on to the movie. Burt Reynolds is a murdering sociopath pederast with a case of jungle fever, but his real flaw is that he’s a cop. I’ve had my car broken into. I’ve had countless things stolen from me. I’ve even had a gun pulled on me. Not once has a police officer solved any of those cases; however, I’ve had them write me tickets for six miles over the speed limit. I’ve had them threaten to harm me for attempting to film them beating a helpless drunk. I’ve endured countless condescending speeches and barked orders, knowing the slightest deviation from said orders would introduce my ribs to a nightstick. You see, in a fight, cops are not allowed to lose. You try and remove his hands from your neck and it’s assaulting a police officer. If a policeman wants to beat you, you better just close your eyes and think of England. And that’s why so many wusses become cops. Their life is a game of Mortal Kombat, and they get all the cheat codes. I’ve never committed a crime in my adult existence, yet I fear police somewhere between cancer and dropping my cell phone into a public toilet. I know that all of them are not bad, but enough of them are. That’s why it pained me to see Devin Butler, our film’s adorable protagonist, want to grow up to be a police officer.

We soon learn why this is so. Devin’s responsibility to the community takes a back seat to his desire to be respected. Hes regularly bullied by two teenagers who inexplicably spend a majority of their time in a grade school bathroom. Instead of taking life’s lumps, learning from the pain, and channeling his rage into something productive, he looks for the shortest way possible to dominance: police work. He wants to feel the spinal cord of his assailers under his boot while he calls them scumbags. He wants to hear fear in their voices, fear that will give him a high of orgasmic reveling that he will chase the rest of his days like some gutter-dwelling junkie. It is here the bullied becomes the bully. Such is the life of a cop, cursed to walk the earth in a state of infinite anxiety while having birdshit for a soul.

Cops create crime the way a drone’s collateral damage creates terrorists. They are abhorred in many communities as untrustworthy, lying abusers of power just as crooked as the men they pursue. They do almost nothing to deter youths from turning to crime. An athlete who goes into a gymnasium in an inner city public school and gives a heartfelt speech about the stupidity of drugs and the nobility of respecting your neighbors does the job of a thousand police officers. Ok, maybe I’m over doing it, but the next time I get robbed, I might as well call Chad Ochocinco. It would accomplish just as much as 911.

So back to the movie: using 80’s logic, Devin Butler isn’t allowed to carry a movie himself. He’s too short. Too sassy. Too black. We all know what happens to short, sassy black kids (think Gary Coleman and Webster): They ended up being owned by an old white guy. That’s where Burt comes in. He complains about having to take the kid in and hates how you can’t take a child to a bar because after two drinks they fall off the stool. It’s a rocky start, but the hate soon morphs into some kind of man-boy lust, and thats when things get weird.

3.) A long, hot hard hug. Burt saves the kid from an oncoming car. He tackles him. They roll around like lovers having a ticklefight on clean sheets. They come to rest and look in each others eyes for a really, really long time. It’s here I realize that I should delete this movie from my computer as soon as it’s over. Burts chest hair has entangled the child in its grasp. Its the only explanation for such a prolonged embrace.

2.) Burt gets shot in the shoulder and decides he’s unfit to operate the most basic of seacraft. If Forest Gump could operate a shrimp boat by himself, I’m positive a one armed Burt could drive a speedboat. In any case, he asks the kid to take the wheel and places innocent little Devin right on his lap. They then go on a very bumpy boat ride. Burts facial expressions suggest climax.

1.) The kid is brushing his teeth in Burt’s bathroom. Burt walks over, whips it out, and starts peeing in the toilet. It takes a sick fucker to do that, and the fact that Burt achieves such a strong, continuous stream almost immediately shows that this isnt his first time peeing in front of children. The kid abandons his oral hygiene and decides to walk right up to Burt’s dick which is about eye level. The kid takes his dick out too. That’s right, this is happening. The kid asks to sword fight and proceeds to piss all over Burt’s feet. It was then that lust turned into love.

And now, questions you may be wondering about:

How much dick-jabbing is involved: Lots, Burt even teaches the kid how to do it, throwing a fist into testicles is something all cops love to do, and he even teaches little Devin how it’s done. He becomes known around the schoolyard as The Little Cockpuncher That Burt Built.

Does Devin make a good cop: Sure, he actually does. Proof that it’s a pretty easy job if an 8 year old can do it. I bet he could also work in a toll both or the House of Representatives.

Underlying racism: Of course, it was the 80’s. Burt threatens to tie Devin to the axel of his car and drag him around town. That’s a little insensitive given the history of that acutally happening. Also, the name of the movie, Cop and a Half is racist in itself, as black people used to count for 1/3 a man in the 1880’s. In the 1980’s they made it up to 1/2. It was almost to a whole number before Martin Lawrence made Big Mommas House.

Does Burt really give a shit about the kid: The molestation suggests there is at least some sort of connection, albeit physical; however, he brings him to a bar, stakeout, and gunfight, all in between blowing second hand smoke in his face.

Who were the villains here: besides the racist pedophile and the black nerd, there was a guy named Vinny Fountain who wore a hair piece and liked to sing golden oldies. He and his goons were so cartoonish, it made me wonder if the entire movie was supposed to be some metaphysical parable inside of a dream, seen through the eyes of a child. I expected Devin to awake, alone in his grandmother’s house, yearning for a paternal Reynolds whom never existed at all. He would eventually return to his school where he would be bullied into suicide.

Fun Fact B: The kid currently performs as a rapper known as Enormus.