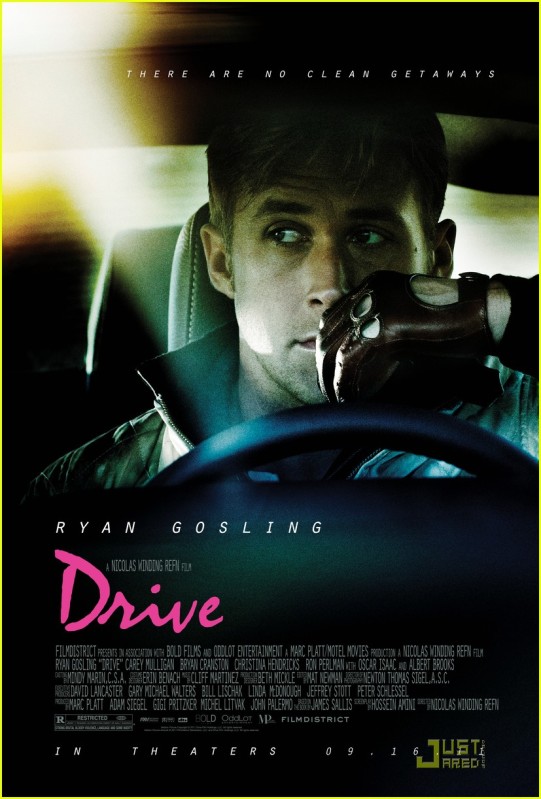 Drive’s protagonist is The Driver. I figured his job is to drive, after he stated to a client “I drive.” So the Driver drives in Drive. I am being a dick about this because Drive contains not so much driving? — Ruthless own Alex K.

Ryan Gosling plays the worst kind of hipster, a brooding one with talent. What is his talent? We’re made to think it’s driving a car, but anyone can do that. Hell, a sixteen year old girl can push an extended bed pickup through downtown traffic. Even a muscular dystrophy victim is allowed to drive, though he has to get special levers mounted to the steering column. It’s like making a movie about a guy who can bag groceries really well (Even that’s been done before: thank you Dax Shepherd and Dane Cook). Gosling’s real skill is smugly staring out of windows, best I’ve ever seen. The blue-blooded features, the kempt hairstyle, the slight build, all fronted by that Giaconda smile. It made me want to pry my eyeballs out with a car key and use them to plug my ears. See no Gosling. Hear no Gosling. The latter wasn’t too much of an issue, considering he had about five lines of dialogue the entire film.

A character would ask him a question. He wouldn’t respond, only gazing smugly through single paned glass. Then the character would assume an answer, and they’d just move on. It was torture. It was like running dick first into a wall of condescending emo-hipsterism. And when he did speak, he would take what seemed like an eternity to find his words, using the device of the pregnant pause and turning it into constipated awkwardness.

I was baffled. Rotten Tomatoes had this movie rated pretty highly. The synopsis is that a Hollywood stunt man moonlights as a getaway driver, a dishonest summary to say the least. That’s like writing Shawshank Redemption was about a man’s quest to find some pretty neat rocks in a prison yard. I’m not saying there wasn’t a lot of driving, there was, but it was the kind of aimless joyriding teenagers did before Nintendo. Gosling’s idea of fun is obeying the speed limit while hypnotically staring into the distance like a sedated labrador thinking about a tennis ball. We were only treated to two actual car chase scenes, both of which required very little skill. I guess they figured it’d be dishonest to have a guy playing a stunt driver to actually need one. Whatever redundancy they tried to thwart was rendered mute by Ryan Gosling and the double jacket. You read that correctly. Gosling’s character needed two jackets at the same time to maintain adequate body heat through Los Angeles’ frigid climate. Let’s take a look how Gosling was accessorized:

Jacket 1.) The top half of the Canadian tuxedo: jean jacket. The denim that Levi Strauss fashioned to keep field hands and miners warm and safe is nowadays being flaunted by youth who know nothing about danger or work. It’s kind of like how Fidel Castrol still dresses like a janitor even though he’s never had to jerk off in a broom closet.

Jacket 2.) Worn on top of jacket one. It’s a white windbreaker with a scorpion on the back. There are three explanations for this: He is part of a Mexican boxer’s entourage. He’s a member of a gang that fights with switch blades and breaks out into song every half hour after drinking milkshakes. He’s a huge fucking hipster.

Driving Gloves: I’ve been driving for over fifteen years. I’ve driven fast. I’ve driven wild. I’ve driven drunk. Never in my life have I said, “You know what would make me better at this, gloves.” The steering wheel itself is made of material that is designed to stick to the human hand, scientists make sure of it. Wearing gloves provides a buffer between the steering wheel and the nerve endings in your hands. I never do anything to separate myself from the natural or mechanical world in any way. I’m a hands-on sort of fellow. There are three things I don’t do: oven mitts, sunglasses, and condoms. I experience life fully and deeply. Sure I’ve got third degree burns, crows-feet, and Chlamydia, but I can also look at myself in the mirror with respect.

Tight Jeans: You know when Gosling drives the best, when his dick and balls are squeezed together like a war-vet and his family having a hug-a-thon in an airport.

I might dress like this for Halloween. It’d be a fantastic costume. I wouldn’t have to talk or make conversation at all. I could just walk around wryly smiling like I know some ancient hipster secrets. People would ask, “What are you?” And I could just look down at them and smirk. The awkwardness would build and build until finally somebody couldn’t take the silence anymore and just offer me a drink, which I would sip on slowly while staring out a window into a dimly lit parking lot.

The movie however does do a good job capturing the lonely, sprawling shittyness of Los Angeles. Thats hardly groundbreaking though, as Heat, Collateral, and The Red Hot Chili Peppers have already done it earlier and more effectively, but it’s always an entertaining backdrop. Gosling broods around to weird synth music reserved for German tranny circle jerks, maintaining his ultra-melancholy mannerisms. We start to wonder what made him so depressed. A sadness so palpable can only come from the death of one’s entire family or repeated boyhood butt-rape. Gosling is so damn repugnant that we hope it was both; however, there is a sneaking suspicion that there is no traumatic past for this character, as his pain is as manufactured as the stunts he performs for the movies. What amplifies my discontent for this story even further is that I can’t tell where Gosling’s character stops and Gosling the actor begins. In every interview I’ve seen him conduct, he comes off like a smug, self-important prick feigning modesty. I don’t know if he was chosen for this role because they wanted the main character to come across this way or if he turned the main character into himself. Either he did a wonderful acting job or completely diarrhea-ed the massage table. Whatever the case, I decided I was going to have to sneak into Dolphin Tale after just to wash the taste out of my mouth.

Despite all of Drives problems, the plot wasnt terrible, and the action sequences were too few but particularly gruesome in an attempt to convey realism; however, I just wasn’t buying it. In reality, if you’re beating a guy to death with a hammer in a strip club dressing room, the strippers won’t quietly sit there, perched like expressionless mannequins on a pier watching the submarine races. They will be freaking the fuck out like people on Jerry Springer. Whoever wrote that knows nothing of exotic dancers nor their ilk.

I also must note that Cranston, Perlman, and Brooks almost save the film, their performances are refreshing. They play complex, multi-dimensional people interacting in complex multi-dimensional ways. And when they are juxtaposed to Goslings perpetual silent treatment, we dont want any of them to step off screen, afraid to be left alone with Gosling, cursed to endure twenty more minutes of straight faced window staring.

Novelty death: The best was a fierce head stomping. It was like an angry hillbilly was having a bad acid trip, stubbornly and to repeatedly attempting to kick start a bicycle.

My second biggest problem with the movie was that it tried so hard to convey authenticity, yet so many things didn’t make sense. The movie took place in the present, but almost everybody had flip phones. Might as well give them all Myspace pages. Gosling gets a ready made family consisting of a chic and her son after a montage of him driving them around and vaguely smiling in their direction, but it’s never clear if he was tapping that or they were just friends. Another thing that perplexed me was that Gosling never cares for his wounds or cleans the blood off of his clothes, instead electing to just drive off into the night. That’s when it hit me: the muteness, the blank gazes, the inappropriate affect, and inability to care for one’s self. In the movie Book of Eli, we realize in the end that Denzel did it all blind. It is here that I realized Gosling was a functioning retard the whole time. It was this twist that perhaps saved the movie. Shit, now Ill have to watch it again when it comes out on cable.