Curtis (Michael Shannon) is an Ohio man through and through, and as such, all but synonymous with America itself. Whenever politicians speak of the grit and toughness that flow from Americas ever-stiffening backbone, they speak of men like Curtis; the calloused, uncomplaining types whose very silence speaks to a steady resolve that, simply put, just gets things done. Whether or not the legend trumps fact, or our need for narrative overwhelms the more complicated reality, is beside the point  Curtis believes it, and we believe in Curtis. And so goes the dream  play by the rules, do your best, and the riches of home, family, and work will follow, interrupted only occasionally by forces we do our damndest not to ever fully understand. Curtis sure as hell hasnt the time, working long hours at the kind of job we always associate with the type  dirty and loud, involving drills, heavy equipment, and piles of earth. Mindless, perhaps, but steady and honest labor, even if its just not enough to convince your wife that she doesnt need to peddle crafts and homemade curtains at the Saturday swap meet. Together they pinch and save, toil and rest, and deal as anyone must with the stresses of parenthood. Only their daughter is deaf, and while happy and well-adjusted, she sure could use that costly implant; the sort of surgery that represents a liberation unreachable in years past. Thankfully, Curtis has great health insurance, and in six weeks time, his little girl will face a future with few barriers. She too will drink from the waters of promise. Its in the cards. All but assured. This is, after all, America.

Only Curtis is a man beset by visions. Bad dreams. Nightmares that he just cant shake. After the kisses have been dispensed, his daughters cheeks pinched, and dinner heartily enjoyed, Curtis settles into a routine of night sweats, turmoil, and even the occasional bedwetting episode. He sees a storm ahead, and its so massive and off-putting that he cant trouble his wife about the details. The clouds are dark, ominous, and enveloping, and the rain a gritty, oil-based slick that threatens to wipe away life as we know it. He hears no voices, and feels no waking threats, but his sleep has become so terrifying that he cant shake them off as mere illusions. Understandably, perhaps, given the life Curtis leads, he wonders if he might have been given the gift of foresight; the touch of the divine to help prepare for a nasty future.  If only it were that clear-cut. You see, Curtis is also the child of madness  the real, clinical variety  and he considers the distinct possibility that his mind is taking that long-feared turn into paranoid schizophrenia. Curtis mother, herself a victim of that very disorder, sits glassy-eyed in a care facility, as if to mock his concerns. Curtis wants help (even seeking counseling from the typically overworked, under-trained staff at free clinics), but as time passes, hes not so sure hes destined for the same family curse. No, this is too real; these threats are external, part of a wicked world that is slowly, steadily closing in.

One of the many virtues of Take Shelter is that while we share in Curtis hellish descent, we never see him taking direction from any supernatural entity, real or imagined. Curtis simply begins to prepare in the only way that makes sense to him: adding on to his storm shelter so when the end comes, there will be more than protection from the rain and wind. When the cataclysm arrives, the family will need food, water, and light, and if this means a bank loan and borrowing equipment from work, so be it. His behavior, of course, appears bizarre to everyone else, but how can one explain the workings of ones mind? I can see whats coming, and Id be irresponsible not to do whatever it takes to keep my family alive and well. But as the dreams intensify and the clouds grow gloomier with each passing day, it becomes more than a task to complete; it takes on the look and feel of an obsession blocking out the rest of daily life. As with any monomaniacal pursuit, relationships suffer, work falls away, and priorities shift with great force. In the end, what is being done in the name of compassion appears to be its very antithesis, driving a wedge between the dull necessities that constitute life as lived and the stark, unchanging bulwark that is the grand pursuit. Why else do we lose ourselves in obsession? Despite that gnawing sense of danger, it is, in fact, the ultimate escape, almost as if by following its mandates, the troubles that forced you to its shores simply fall away into irrelevance. 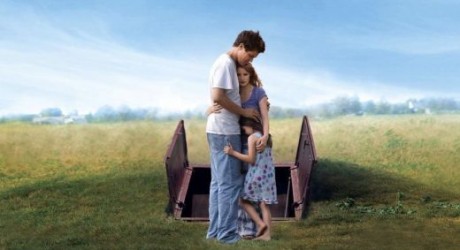 Taking the film straight, unburdened by subtext, the brutal journey into mental illness is a fascinating one, as what comes to the fore is the sense that one so afflicted could never hope to explain the torment. It is, frankly, impossible to feel full empathy with the disease, as we naturally cling to the simple wisdom that one can simply alter behavior at will. We encourage victims to buck up, cheer up, or move on as needed, as if the brain were so malleable that it could be brought into line by simple encouragement. And if we want to believe that Curtis has come face to face with a genuine dilemma, in that his dreams are windows into an apocalyptic future, then the film works just as well, especially when we consider the ambiguous, yet strangely revealing, conclusion. Frankly, the truth of what Curtis sees matters not, for in the end, he acts as if it is so, and his behavior  and the effect it has on those around him  is what ultimately drives the story. But it is the building dread, the very sort the film cultivates like a sickness, that pushes Take Shelter beyond a simplistic is he or isnt he? exercise. If it were simply a matter of learning the ultimate state of Curtis mental health, the film would wither to its lifeless end, running out of air like a sad balloon. Instead, the claustrophobic intent grinds away at a viewers nerve until it smacks us silly with the actual nature of Curtis plight  his Everyman is America itself, and theres no succor in what awaits us all. Its the America just after the big fall; that moment when we all realized theres no going back to prosperity, hope, and a better life. The future is black, yes, and were all an inspiration away from digging our own backyard tomb.

Yes, the storm like no other is Americas future  one having arrived sooner than wed care to admit  and despite our best intentions, the center cannot hold. The jobs are gone or going, our homes a senseless reminder of crushing debt, and our kids, well, they need us more than ever and were in no position to offer them guarantees. Were out of money, out of time, and sick with worry. We work to feed our families. We endure the bullshit to keep our insurance. We save for a yearly vacation that only numbs the pain for a time. And at the core of Curtis  at the core of us all  is that unshakable feeling that with every new day, the thing weve put out of our minds is here at last, like the grim reaper with hand outstretched. That storm of which he speaks  universal, yes, but always individualized  is no mirage, nor is it the unfurling of heavenly scripture. For when it all falls apart, theres no lonelier feeling, and only a godless indifference fills the void of purpose. Hes not crazy, but hell wish he was, for then there would be a solution to the crisis at hand. Rest, medication, and therapy. Maybe a loving embrace. But when a dream dies  the dream, as it happens  the only real comfort is the undiscovered country from which no man returns.

In the best sense, Take Shelter is the first (and best) snapshot of the zeitgeist, all without a shred of the overwrought. There are no speeches, no convenient outs for our pain, and no symbols to drag from their beds and beat into a soothing submission. Were left with a parable, but one with the good sense to avoid the straightest course. No one is flattered, few are spared, and solutions are as hard to come by as the shelter Curtis will eventually need to keep out the rain. Our deep, abiding concerns – our angst-ridden days and nights - are eating us alive, and the sky above, far from being our salvation, will simply open up and quietly wash us away.