“Who here is on Team Jacob?” an AMC employee said, standing in front of a theater full of girls who responded with screams and yelps that chilled my blood. It was as if a hundred dolphins being thrown into a fire. “Now who here is on Team Edward?” The next barrage of teenage excitement was something even more intense. The sounds reverberated throughout my body, giving me my first period. The hype man then proceeded to tell us about proper theater decorum and a few safety rules. This was no longer a movie; it was a ride, a journey, an experience to be felt with hundreds of girls. Divided only by semantics, we were all on Team Estrogen.

I wasn’t the only man in the joint. About a dozen of us were scattered there motionless, looking about as terrified and uncomfortable as Newt Gingrich at the Apollo. Broken men we were, too detached to form some bond of brotherhood, afraid to make eye contact with one other, too ashamed to even give an understanding head nod. Our testicles weren’t left at the door, they were paraded in, decorated in lipstick, and forced to take 100 insipid duckface photos. But you can mock me all night; I apologize for nothing. I learned more about women from watching Twilight with them than all my other experiences put together.

If Twilight is considered cinema, then Busty Nurses 9 is too. Sure both happen on screen, but the screen is secondary. It’s your own reaction you crave. Everybody knows what will happen already: Bella and Edward get married and start a family, Nina Hartley does reverse cowgirl to the guy with the brain injury and cures his amnesia. We put ourselves inside these visceral simulations via cinema to harvest our deepest desires: Women want to be eternally worshipped by supernatural forces that fight over them while overdosing on praise from this world and the next. Men just want to get boned by sluts. And love has absolutely nothing to do with either of these things. Saying Twilight is about Love is like saying Hooters is about the French fries. The genius of Twilight is that it touches on what every woman craves the most: attention…and justifies it under the guise of love. Its brilliant actually. When men watch porno, we feel dirty. I can’t even climax if the watchful eyes of my judgmental goldfish are upon me, I have to throw a towel over the tank, but when women see Twilight, it’s an open orgy of orgasmic, unrepentant celebration. I envy them.

But let’s get to the movie, Jacob gets shirtless in less than ninety seconds in. It took Ava Devine four long minutes to lose her top in Naughty Teachers 14. Pathetic! I’d say the state of modern porno is becoming too plot driven. Somebody tell these Victorian smut peddlers to take a page from Stephanie Meyer. We also learn that Edward wasn’t always a vegetarian: he fed on human blood for a while but choosing only to drink the blood of rapists and molesters. I wonder what molester blood tastes like, probably somewhere between communion wine and Fanta. Anyway, a good forty five minutes of the movie is dedicated to the wedding. It’s every girls dream: envious townies hypnotized by the pageantry, doting family members with Bellas best interest at heart, a clandestine clan of the un-dead welcoming her into eternity, and the unwavering, unconditional servitude of a man who is her superior in almost every faucet of life. It’s all eyes on Bella, and by now, every woman in the theater is Bella, and every man in the theater is scared shitless. To put a frenzied cherry on top of a grandiose fantasy, Jacob shows up at the wedding with all his jealousy and throws a fit. Bella tells him that she’s going to fuck Edward as a human a few times before she goes full vamp. Jacob knows that crazy vampire dick will hollow out Bella’s woman parts, so if Jacob ever does get a crack at that puss, it will be like throwing a hotdog down a hallway. Jacob explodes into full wolf and runs away in anger. The theater erupted into the sound of labias slapping together in applause.

The next segment revolves around the honeymoon sex. I thought this a little racy for some of the younger teenagers, but what the hell; cable television is way more sinister: Snookie gets DP’ed in a hot tub filled with vomit and the Kardashian sisters have a sex tape with Reggie Bush or something. One Mormon’s version of perfect sex will hardly destroy their innocence. Edward goes at it full missionary style, and as he busts one, he breaks the bed into pieces, total amateur. The best way to show one’s sexual approval is to go cross eyed before yelling, “BOOM GOES THE DYNAMITE!” as you ejaculate onto a lower back tattoo. But in any case, Bella becomes addicted to sex, but there is a catch: Edward likes it rough, real rough. Bruises start showing up on Bella’s arms and legs, but she doesn’t care. Great message to our young audience: if your boyfriend beats you while having sex, it’s the ultimate compliment. Mormons.

note: I should remark here that not all women love Twilight. Some are into True Blood, which is just Twilight for women who were molested

I would say that the movie does a good job capturing the nervousness and angst for a girl having sex for the first time. Most of the women who I watched it with probably lost their virginity in a double wide at fourteen to a second cousin, but they were still able to fantasize that it was on an island off the coast of Brazil to a handsome, brooding vampire. That truly is good writing. I wonder if this movie starts giving child molesters good ideas, “Hey, I’m way older than you, and what I’m going to do to you will cause some bruising and pain…how Edward and Bella are we?!”

The paint by numbers progression here is that Bella gets pregnant. She becomes knocked up with a demon baby: half vampire, half human. That’s how Wesley Snipes in Blade was born, and he turned out pretty badass. As long as that baby pays its taxes, it will be fine. But baby needs blood to survive, and it’s eating Bella from the inside out. Just to torture Jacob even more and make sure he’s still in love with her, Bella invites him over to explain to him that Edward’s seed will eventually kill her. This causes all kind of problems between the vampires and the werewolves, just like Bella wanted. Now instead of two guys fighting over her, now it’s two different species. Bella starts drinking cups of blood to feed the baby. That wasn’t in the books at all. From what I understand, Stephanie Meyer wrote that Jacob stuck his dick in Bella, letting the baby bite the head and suck some blood out for nutrients. Then Jacob busted a nut and got the fetus pregnant with a half vampire, half werewolf, half human baby that grew up to disappoint everyone by majoring in English Lit.

The best part is that Edward can talk to the baby telepathically. “She loves the sound of your voice Bella! She can’t wait to be born! She says you should make me a sandwich while I watch football,” that’s where I would have gone with that. Anyway, the birth is both gruesome and awesome. Surprisingly, when the baby is born, Jacob imprints on it, which is werewolf speak for saying that he falls in love with it. That’s right; a fully grown adult male falls in love with a baby. Now there is tons of creepy ultra right religious subtext in this movie: Bella deciding against an abortion that would save her life, and sex before marriage, but purporting pedophilia is where I draw the line. It’s known that lots of Mormon dudes marry chics way younger. I guess this is in support of that. Since Stephanie Meyer worked so hard to make the Jacob/demon baby connection more socially acceptable, I wonder if Jerry Sandusky’s brilliant legal team will go with that defense: “Your honor, I took those kids into the shower to imprint on them.” 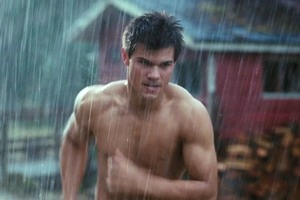 Make no mistakes though; this is a good movie, a great one in fact. It accomplishes everything it sets out to. As a man, I don’t get it, and as a film critic, I find it offensive, but I’ve seen its impact on society to fully appreciate how effective it is. The only way I can explain it is to draw a male parallel of Twilight: Here goes, a sect of lethal ninja warriors are fighting a T-Rex on top the Louisiana Superdome, underneath the Saints are playing the Patriots in the Superbowl. The Government sends a battleship up the Mississippi River to break up the fight between the dinosaur and ninjas. Tomahawk missiles are launched. Explosions are everywhere. The T-Rex and ninjas decide to join forces to destroy the battleship that just fucked them up. They jump off the Greater New Orleans Bridge, and in mid-air the ninjas are flinging throwing stars, the T-Rex is breathing fire, and down below the navy is unloading machine guns upon them. Carnage. Fire. Mayhem. Everyone and everything dies. Meanwhile, the President, played by a hot chic is debating weather to send in more battleships. She calls a meeting with her top advisors (played by other hot chics) to discuss a plan of action. They have a giant orgy instead. Credits. If we had a Twilight for men, that would be it. Now put your dick back in your pants and go fall in love with a baby!