Based on the book Vengence by George Jonas

Munich is, simply put, the best film Steven Spielberg has ever done. And though it may not quite attain masterpiece status on its own, it is Spielbergs masterpiece; a film of such vision, courage and — thankfully — restraint, that it stands miles ahead of other, lesser movies that only pretend to deal with world events. While its restraint does not mean that it lacks perspective or pulls back to an uninteresting objectivity, it is not infused with the usual Spielberg touches that so often insist on an implausible or hackneyed uplift. After all, there is no real way out of the madness of war and terror, and by the time we reach the end, we realize with a shock that in fact, once the policy of retribution has begun, it is impossible to stop. Perhaps there was a time that someone, somewhere could have declared that enough was in fact enough, but, as is the lot of humanity — on all sides of the matter — old wounds cut deep, and survival became equated with murder and revenge. Because anything less is seen as appeasement, if not outright surrender, few have possessed the courage to take bold steps away from official doctrine. But this film is more than an ode to what might have been, or a lament at the course taken; it is a painful stab at Israel itself. Needless to say, the film does not blame Israel for terrorism, nor does it display a bleeding heart for its enemies. Instead, it reasonably concludes that at the point Israel decided to eliminate the perpetrators of the Munich Olympic massacre one by one, it had sold its soul to revenge; a trap without hope for escape.

Perhaps only someone of Spielbergs clout and unimpeachable character regarding the plight of the worlds Jews (not only Schindlers List, but the Shoah Foundation) could have made such a film, for anyone else — even a Jewish filmmaker of less renown — might have been attacked, either for self-hatred, or a reckless disregard of reality. No one would ever accuse Spielberg of ignoring the plight of Jews or the Jewish state, so he is granted the freedom to ask tough questions and avoid simple conclusions. Whereas Schindlers List was a relatively safe film to make (as good as it was), Munich is without heroes or noble causes. Of course, those who butchered 11 Israeli athletes were vile, hateful terrorists who deserved scorn and yes, even death for their horrific crime, but again, arguing that position would be all too easy. Moreover, it wouldnt require a talented eye to bring us such a tale. How much more interesting it is, then, to show us the crime (the film begins with the hostage crisis, throws brief flashbacks throughout, and concludes with the bloodbath on the tarmac) and argue that what followed, while understandable in many ways, may have pushed Israel into an untenable position — a death spiral, even — that would produce reprisal after reprisal until no one could quite remember what started the whole thing in the first place. More than that, those killed in the years after Munich may not even have been directly involved, a fact seemingly brushed aside by Israeli officials who argued that because they might eventually be responsible for something heinous, why not get them first before more damage is done? Yes, kids, thats pre-emption, and we now see the fruits of that tactic in our own country. 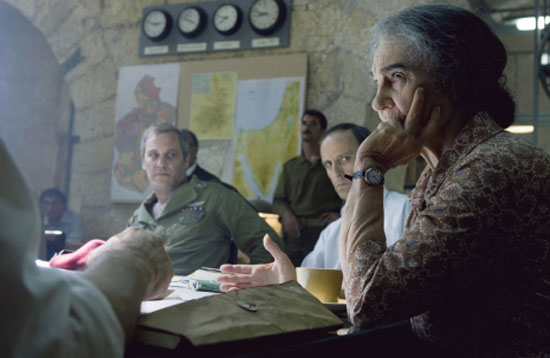 Golda Meir (Lynn Cohen), articulates the position Israel is forced to take when she states, Every civilization finds it necessary to negotiate compromises with its own values. In other words, she is a tough-minded realist, yet fully realizes the consequences of her decision. Israel cannot remain peaceful and at peace. Again, Spielberg is not arguing that Israel ever had another choice in the matter (hes no diplomat or political philosopher), but merely demonstrating that there are hidden costs that may not show themselves for decades is a necessary counter to bloodlust, even that which is motivated by survival. And with such an attitude — that each act against Israel shall be met with swift, unyielding force — the nation and its citizens must realize that the vengeance from the other side will never, ever cease. The new reality will be bloody and unrelenting. Consider the final image of the film — the World Trade Center in New York several decades before the 9/11 attacks. In our own time of jingoism and fear, it takes balls of iron to make that link between the two Septembers, but its power is unmistakable. Sure, there will be hawks and neo-cons alike who will scoff at the connection; accusing the director of blaming America first or some such nonsense. Hes doing no such thing. But the hatred unleashed in 2001 had an origin, and its not too much of a stretch to say that the events of 1972 and their immediate aftermath are in fact part of the deal. Not a direct cause, of course, but linked nonetheless. So again, there are no answers here, or attacks on particular parties and individuals, or self-righteous posturing from a privileged artist. Instead, there are only observations, considerations. As such, Spielbergs film, above all, is a dose of sanity amidst chaos. Nothing is offered into law, nor do leaders have their marching orders. Simply step back and think. Deeply, and without rage. 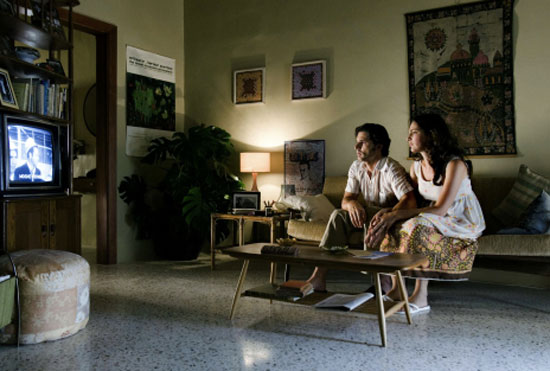 Again, the power of these brave arguments is made that much more immediate by the thrill of the narrative. This is the tight, focused work of a man at the top of his game; a nearly three-hour film that whips by in a flash, remaining engaging, absorbing, and scintillating throughout. Spielberg, as we know, is a peoples filmmaker, and as such usually puts the stunt above anything resembling depth or insight. Here, both practically jump out of every frame, for as we are treated to tension, action, and explosions of extreme violence, nothing is done without consequence. That said, moral sanctimony fails to make its expected appearance. Yes, there are characters who begin to question the developing mission (especially Avner, played by Eric Bana), but the film itself remains detached, as if the calculated assassinations can speak for themselves. One may cheer on the deaths of these people, but first, you must see them die. Given that the film shows bullets entering heads, chests, and abdomens, as well as the after-effects of bomb blasts — shattered limbs hanging from ceiling fans and the like — revenge is never sanitized for our protection. Fine, you may believe in an eye for an eye, but first, smell the tissue, the bile, and the brain matter, for this is what it entails. That is the true essence of realism, then; that one be forced to takes in all aspects of a position, especially when dealing with the loss of life. Perhaps that is why so many who return from war become its strongest critics.

This is largely Avners film, as he is the team leader, and the one man whose family is given screen time. Perhaps the wife and child back home is a nod to convention, but it never becomes a distraction. Avner might feel as if hes losing touch with his real self, but he genuinely believes his actions will ensure a better future for his loved ones, as well as for Israel. The assembled team includes the expected folks — bomb maker, the documents guy, the trigger man, etc. — but the focus is less on their personalities than their contributions to the cause. It could be argued that characterization takes a backseat to action in this regard, but in this case, the story is actually enhanced by the decision. Theres a certain perverse thrill, of course, to peeking behind the curtain and watching experts carry out their craft, and even when its assassination, the excitement remains. We genuinely want to know how these murders are being carried out, regardless of our position on the matter. In this sense, I was reminded of The French Connection; where we went along on the stakeouts, the surveillance, and the phone calls because it is safe for us to do so. We dont want to get our own hands dirty, but we wont interfere with their work. And its all quite matter-of-fact, without cheap sensationalism. As such, Spielberg takes our desire to see bad guys punished and puts it back in our laps. We are not amused. 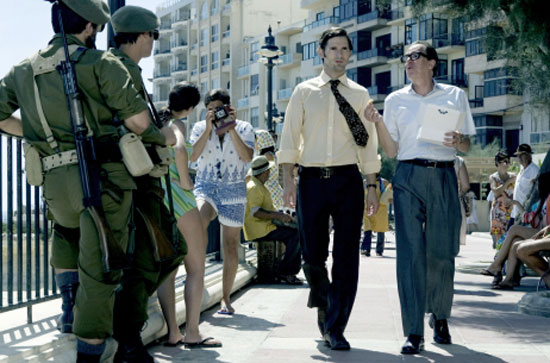 In addition to the identities provided by Israeli intelligence, Avner and his men are fed important information by a hired gun, Louis, played by Mathieu Amalric (who just happens to be a dead ringer for Roman Polanski). Louis sells Avner names and locations for hundreds of thousands of dollars, but insists that no governments be involved. Having no real ideology, he sells to enemies of each other, doubles back, and betrays those same folks again and again. Its all about the cash, of course, and hed rather not hear about politics and causes. Because of Louis involvement, a dash of James Bond enters the film, as we wonder whos fooling whom, and what might turn up next. Can Louis be trusted? Was that incident a CIA ploy? Whats that KGB agent doing there? Its all very hush-hush and old school spy stuff, and Ill admit to finding it all fascinating. It reeked of 70s paranoia, and even the characters get in on the act, as Avner tears apart his room like Harry Caul from The Conversation. Its like the liar who wont trust anyone else. At one point, Louis suspects Avner of having government ties, so he takes him to his fathers grand estate for a conversation. The scene might be viewed as unnecessary, but I was quite taken with it. The man, known as Papa (Michael Lonsdale), harbors a will of steel, but hes so gracious that we can almost forgive his soulless profession. Here is a man, after all, who supplies the sort of information that gets people killed, but he seems so comfortable cooking a large meal that he comes across as harmless. Its also important to see that those who remain instrumental in world politics and intrigue are not only the ones who insist on detachment, but can — and do — live comfortably while others risk life and limb. They are sick, amoral opportunists, but somehow, our world could not function without them. 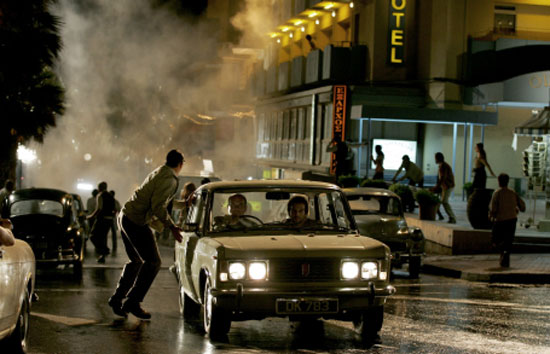 The performances are all world class — Geoffrey Rush, Daniel Craig, Ciaran Hinds, Hanns Zischler, among others — and because the film lacks the epic feel so often employed by a man known for grand gestures, we can concentrate on the tale and, most importantly, the tiny details that add up to a bold pronouncement. At a time when we seem to get one of two equally insipid schools of thought — cheerleading sadism or mindless, directionless opposition — we at last have cold, defiant reason with which to approach global terrorism. Arabs and Palestinians are certainly not innocent, nor are they animals. Israel, while strong and usually sympathetic, is not blameless. And the United States, well, while we can have noble intentions, imperial hubris continues to be the bane of our existence. No one could possibly come through unscathed, and as Avner cries, Peace will never come from all this. Each side remains entrenched, convinced of its own righteousness, and the only direction leads to disaster. In a sense, Spielbergs Foundation is a testament to such absolutes, and the utter ruin that inevitably results. Simply, this isnt Spielberg the man, or even Spielberg the Jew; hes just a human being, trying to see a way out of certain death. None is immediately clear, and his greatest fear remains — that the door might have already been closed.