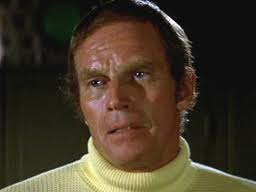 A sweater would have been too effete; a blunt concession to the sort of European limp-wristedness that damn near lost the whole caboodle to the jackbooted war machine of yesteryear. A casual khaki, needless to say, lacked sufficient heft, as if the task before him didnt involve snatching back a fleeting love in the face of aerial doom. And the coat and tie option might have spoken to a relaxed dinner or eyelid-dropping board meeting, when we all know the confining cravat would have been whipped clean at the first sign of perspiration, rope burns be damned. No, anything and everything about this scenario  lives in the balance, pouty-lipped sex kitten perilously close to a mountain top expiration, Linda Blair in need of a new kidney  required a turtleneck. And not just any turtleneck, but cinemas closest approximation to a full-torso tattoo; a skin-tight, breathing-be-damned casing so unforgiving that with every cutaway to Hollywoods most jaw-first visage, Ben-Hur himself appeared to be on the verge of a full-tilt bowel release.

No mere article of clothing, Hestons turtleneck is a supporting player all by itself, and perhaps the only fabric deserving of an Academy Award unrelated to costume design. Chuck is inconceivable without it, and more than making him the pre-eminent stick-and-rudder man of the skies, it speaks so deeply to the character of Alan Murdock that it all but fills in the necessary back story. What we dont know we should, and what we couldnt we do, and in an instant, like a bullet to the forehead, we understand that the day we banished such articles from the closets of our heroes, we took that final, ill-fated step towards irrevocable chaos. And heres to the romantic folly that insists Heston himself is buried in the damn thing forevermore.

Its important that Mr. Murdock don the attire of a professional heterosexual, as few could ever hope to compete with his purely American sense of entitled masculinity. Hes the lover who will talk about it later, all with cards so close to the vest that they threaten to come out the other side. Hes baffled by dames and their ways, but he needs them for his very breath, as he takes and vanquishes with all the subtlety of a Panzer division on a Warsaw afternoon. And yet, hes mandated by the very gods who shine upon his ilk to leave his sweetheart with wounds unhealed, so as to save the poor sap from herself. Sure, Nancy can operate a pilot-free plane for a time, but the hysteria borne of woman must eventually yield to manhood. You see, its all about finishing, and Murdock is a closer from the old school. Some might even say he sent that artery-clogged pilot into the 747s path just so he could dash to the rescue. He lives to uphold the creed that destroying a village will in fact save it, and one suspects that hes willing to risk his life on this occasion not to ensure a successful landing, but rather to mandate eternal devotion.

The true tragedy, then, would not have been the loss of dozens, but Nancys inability to gaze upon his marbled intensity once more, what with her being reduced to smoke-filled ashes somewhere over Utah. Hell, he should have been aboard the plane all along, but that would have been too easy; a quick wipe of the brow, a light jog down the aisle, and all fear vanquished. No, he had to remain terra firma, ensuring his phoenix-like rise to the side of quivering femininity, with a quick, firm smack to the skull to knock the cross-eyed kookiness right out of her. She loves him at last, and his lack of an answer is the only suitable slap of good sense her type would ever need.

Even by journeys end, when Alan is safely aboard and doing what those in tight slacks do best, hes ignoring the atypical strength that came before. Go do what you do best, he commands, which is not taking the controls of a jumbo jet after a lifetime of serving drinks, but soothing weary travelers who still suspect this bird just cant stay in the sky. Shes a showpiece; a barely articulate replicant of pseudo-humanity who can shake and shimmy until the fasten seat belts sign is turned off at last. After all, hes the one who can, self-described, do wonders in thirty minutes. A sex machine with three acts? Foreplay, fun, and fulfillment, long enough yet nowhere close to overlong? Does she really want to make a counter-argument? He dispenses wisdom, articulates solutions, and sets the course of action, and hes not above crashing the damn thing on purpose just to show he can survive anything. 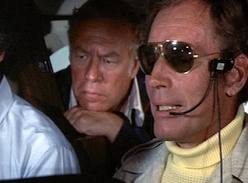 Read me the altimeter, he roars, again and again because hes not about to abide a long pause with only minutes to spare. And if he chooses to toss aside Nancy like an old magazine in favor of the appropriately condescending honey — a term so ubiquitous that were it the center of a drinking game, alcohol poisoning would yield to death in short order  what objection could survive a flash of those maddening teeth? Murdocks very existence is a rebuke to the whole of the womens movement, and the definitive statement that were it to succeed in full, planes would crash from coast to coast, their burning husks a laugh-filled lecture to anyone so bold as to declare that equality is progress. Climb, baby, climb! is no mantra for a new generation of chicks, seeking corporate parity, nor is it a desperate plea to the airplane itself. Hes in it for the coitus, man, and Moses doesnt need some goofy pill to remain in character. Just a gal in peril and the opportunity to set things right, be it air travel, the gender gap, or America itself.