I want to talk about Rashomon in a non-film school way. So much, so very, very much, has been written about this film and more importantly its grandmaster writer/director Akira Kurosawa that it is difficult to get a word in edgewise. Most of what has been written, in my opinion, is quite accurate–but–the writings tend to deal with Rashomon’s influence, innovation and legacy in regards to the history of cinema, and not with the film itself. What I want to do, is talk about Rashomon in a bubble; here is why it is a great film of and in itself. For specifics in terms of what this movie means to all of film, please consult the grandmaster of movie reviews, Roger Ebert.

If you haven’t seen Rashomon, you ought to. The story itself is ostensibly a courtroom drama about the murder of a man and the rape of his wife. I say ostensibly because the plot could have been about anything, since it is actually about everything. The presence of humanity is so immense in this movie that even though the film is over 50 years old, and the fact that it is set in feudal Japan, you will not only relate to its theme, but it will remind you of an event in your life that took place in a bar last week. Similar to Laurence Durrell’s masterwork, The Alexandrian Quartet, Kurosawa tells the same story four different ways. Now, the “facts” themselves do not differ, but the motivations behind them do. The woman was raped and the man is dead, but why those two “facts” are true, is never, ever made clear. If you have ever sat on a jury, or have any experience at all with non-TV courtrooms, you know that Kurosawa nailed it. No two witnesses ever see the same event in the same way. Ever.

In Rashomon there are four witnesses. Three primary “actors” and another, the woodsman, who was hiding in the bushes watching the evetns unfold. Each of the three principle participants spins the story, not necessarily to cast them in a better light, but to show that they, their egos, were in control. The actions that took place occurred because they willed it. They were active in the crime. At the helm, so to speak. Which, again, to draw a comparison to Durrell, is so damn true. For in the first two books of the Quartet, Justine and Balthazar we are are given the same story, twice. In the first telling (Justine), the central character of course believes that he lies at the center of the action. That is it his presence, his philosophies, his axioms that are at the center of the shit storm. Others are only bit players, along for his ride. In Balthazar we learn that yes, the events described in Justine did in fact occur, the motivations for them are completely different than the first book led us to believe. The third book in the series, Mountolive, retells the events yet again and blows the whole ordeal wide open and we learn what is “actually” going on. Story number four, Clea, serves to only further confuse–and satisfy–us. This is remarkably close to what Kurosawa does in Rashomon; each story is interesting on its own, and the four mashed together are simply wonderful. 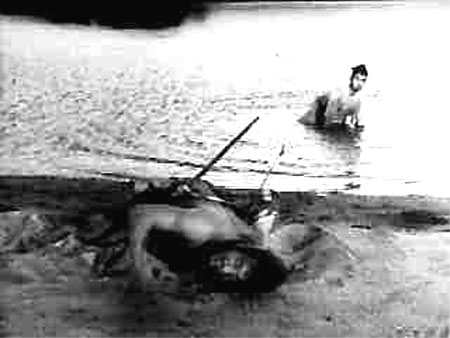 >While I do like how the cliché of “Dead men tell no tales” is shattered by the husband’s version of the story (he’s dead so they use a medium to channel his spirit), my favorite telling of the tale is the woodsman’s. For this version of events, while still not “true” from a evidentiary stand point, is the most satisfying, for it exposes the lies of the other three people. The great bandit acts with uncertainty and almost trepidation. Hesitation, for sure. The proper Japanese woman is exposed as a self-serving, debased and vicious cunt, and the husband, the noble Samurai, is as scared and dishonorable as a playground bully. Put another way, all three principles are nothing like what they all, individually, purport to be. They are indeed fakes, phonies. Of course it turns out that the woodsman who is telling the fourth tale is full of shit, too, but so what? His bowels being full are the heart of Rashomon’s message! We’re all COMPLETELY full of shit, at all times.

Moreover, at every opportunity, no matter the circumstances in question, we, as humans, can be nothing but self-aggrandizing and vain. We lie so that we can live with ourselves. And we know this to be true every minute of every day! The sad part is, that it takes somebody else’s balls to point this irrefutable fact out to us. Or, as Charles Bukowski said, “The important thing is the obvious thing, which no one is saying.” As to why all of the above is true, I have my own ideas. The big one being that I believe human beings are more concerned with their legacy than anything else and are therefore are continually lying to bolster their image. But my interpretation doesn’t matter; and that is exactly what Rashomon tells us.