Imagine a seven-year-relationship where two people —
only attractive by the standards of People magazine and
Entertainment Tonight — meet in airports, parks, and
apartment complexes, all the while giggling, laughing,
placing straws and glasses up their noses, and
occasionally having perfunctory sex. Now add games
like mutual silent treatment, where the first one to
make a noise is, like, a total loser, and then the
other pretends she is choking, only hes hip because
he has a deaf brother, so he can, like, not talk for
days. Finally, we can top it off with naked
photographs in the desert, and sips of beer by
moonlight, where nods are given, amorous looks are
exchanged, and human speech is suspended in favor of
hyena-like squeals. These days, it indeed might pass
for romance.

Ashton Kutcher, huh? Is this his stab at leading man
status?

A stab, perhaps, but an utter failure on all counts,
save reproducing a gagging sensation in the viewer
that approximates asphyxia. Oh hes dreamy and stuff,
what with that hair all out of place, and that basset
hound look brought to near perfection and his muscular farmer-boy physic; but hes never
been more unlikable, and Im including each and every
monotonous minute of Punkd. Here, hes Oliver — a
30ish entrepreneur who starts an internet business
called diaperrush.com, only to watch it fail
unexpectedly, despite the fact that it just happens to
be the worst idea in the history of commerce. He loses
love (some Asian broad who leaves him with the old
standby Youre never here….I cant do this
anymore), only to gain it again with Amanda Peets
Emily, only to lose it and gain it many more times in
the next several years. Its a romance for those
seeking eternal justification for offing a lover, or
walking the fuck out of a marriage that drones on and
on and on. Generations past had Cary Grant in a tux;
we have Ashton Kutcher in his boxers in the back of a
station wagon. 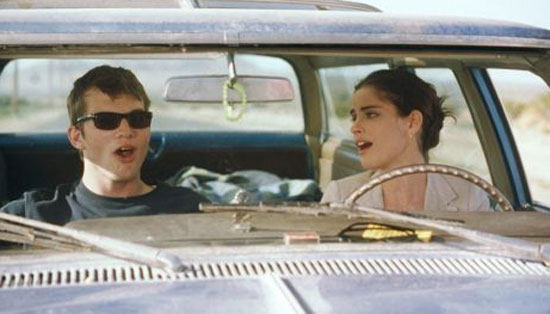 So that Asian chick — is that the best line in the
film?

Peet has several gems of her own, including this small
attempt at conversation after first meeting Kutcher —
She: What sign are you? He: Cancer. She: Strike
three. He also utters the nugget, You only get one
chance to make a first impression. And I think they
once talked about something or other on New Years
Eve. Honestly, one would be more inspired to find
stimulating conversation in the midst of a smoky,
blood-soaked battlefield, teeming with headless
infants and the shattered torsos of expired
grandmothers that have lost their vaginas to the
cutlass, than any random five minutes with these
people. In a good mood? Snuffed out like the hopeful
candle of a Ukrainian orphan if they merely passed you
by. Found a good job, married your dream girl, and
even hit the lottery for good measure? Youd still
slice open your scrotum, fish out your nads, and hurl
them but one second ahead of the rest of your
shattered soul as you flew from the nearest bridge. No
two people in the history of the medium have had less
to say to each other, and yet this shit drones on for
104 minutes.

Quiet!! Do you want Jonny to have a heart attack?

So why in the fuck did I see Ashton using sign
language?

He has a deaf brother, asshole. Didnt you read the
first paragraph? To my surprise, the deaf dude was the
most normal person in the movie, as he settled down,
had kids, and seemed to make a pretty good living.
Moreover, he was sweet, sensitive, and a perfect
gentleman. Needless to say, portraying the handicapped
as anything less than bitter, suicidal, alienated, and
lonely meets with my strong disapproval, but heres to
the screenwriter for having the nerve to play it
straight. Fine, the deaf dude was a saint, but he was
harmless, and we only had to see his rotten kids once.

But you learned something, right? Something so
terrifying that youre reluctant to repeat it in mixed
company?

At a sales meeting to acquire venture capital, Ashton
says that 240,000 babies are born each and every day.
Im not sure of the source or even if that number is
reliable, but if its close, nothing more shocking and
disturbing will ever cross my line of sight again.
Fine, theres still a chance that Lynndie Englands
birthing video will turn up on some obscure website,
but odds are, this will be the nadir of my life. While
there are numerous reasons for being terrified of such
a strain on our resources, the most depressing fact of
all is that even if we pushed Planned Parenthood to a
Henry Ford-style level of efficiency, well never get
rid of all the little buggers. My dream of an
adults-only utopia, while fervent and alive in my
minds eye, remains but a pipe dream; always on hold
for a better day that will never come. 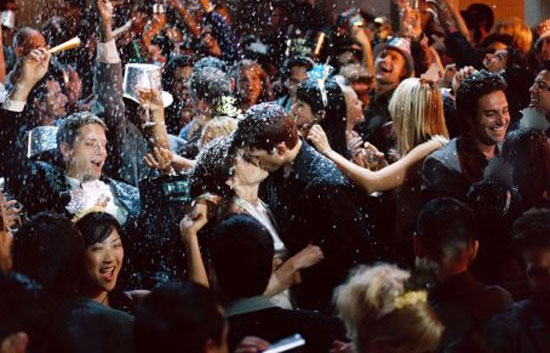 So do these lovebirds finally get together?

I guess, only given the history of the pair, it is
unlikely they will survive living together. Everything
is great right now, but as theyve only fucked, sang
in the car, and talked about diapers, the realities of
day-to-day living will certainly challenge those with
little capacity for elevated thought. From what we
see, they may even be illiterate, if not mildly
retarded. I say mildly only because Peet does open a
gallery for her photographs.

But youre missing the point — they couldnt love
anyone else because they were meant for each other.
You deny that possibility?

Meant for each other? Perhaps, but only in the same
way as retards and velvet, cows and BBQ pits, or
senior citizens and carbon monoxide are meant for each other. Movie love died
with Nick and Nora; the rest is just filler.