THE LOST SKELETON OF CADAVRA

Its always difficult to assess a film that is knowingly, intentionally stupid, although The Lost Skeleton of Cadavra at least has the good sense to appear as a cheesy 1950s sci-fi shlockfest, rather than a modern update.” This isnt a remake, nor does it use contemporary settings to comment on the idiocy of the age of Robot Monster and Plan 9 from Outer Space. Instead, the film uses the look (down to B&W, grainy stock), feel, and attitude of that bygone era to make a film that intends to be funny, but without an obvious wink and a nod. The film knows it is garbage of the lowest order (unlike the infamous Ed Wood, who insisted that he had vision”), although that self-awareness has the unfortunate consequence of stifling the guilty, mindless fun. In Roger Eberts recent review of the film, he included a quote that states an unavoidable fact: It is a curious attribute of camp that it can only be found, not made.” I couldnt get those words out of my mind as I watched The Lost Skeleton of Cadavra, although I did find a few chuckles along the way.

For no reason whatsoever, the film hangs around for nearly an hour and a half, when 30-35 minutes would have sufficed. Had I checked my watch, Im certain the laughs stopped around that time; the minute the novelty wore off and the jokes started repeating themselves. The plot is pure nonsense — heroic Dr. Paul Armstrong and his vapid wife Betty are on trip to a secluded cabin to look for a meteor that contains the elusive “atmospherium,” an element that can, of course, change mankind as we know it. At the same time, two aliens, Cro-bar and Lattis, are after that same element to power their ship back to its home planet. Matters are complicated by the fact that their pet mutant has gotten loose and is most likely killing farmers and park rangers. The third and final piece to the puzzle involves Dr. Roger Fleming, a curious megalomaniac who also seeks atmospherium to resurrect the fabled skeleton of the title and pursue world domination. 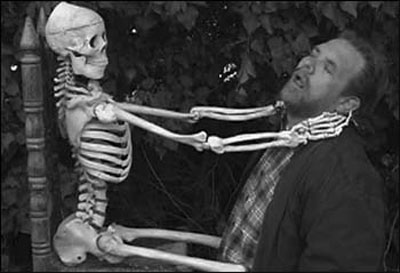 It shouldnt surprise you to learn that theres also a secret weapon that can change forest animals into human beings (here we meet “Animala,” a sexy creature that likes to lick the hands of strangers), a fiendish hypnotizing twist, and the worst special effects imaginable. When the skeleton walks, for example, he is either held up by other characters, or is being pulled along by visible string. The spaceship is cheap cardboard, the laser effects are cartoon “lightning” bolts, and the mutant is quite obviously a man in a bizarre costume that looks like a fish crossed with a tree. Characters speak in decidedly wooden tones, others laugh like hyenas at their sinister plans, and fight scenes are awkward when they arent clumsy. Armstrong, the doctor, is vain and foolish, referring to himself as a scientist at least three dozen times, and his wife utters nonsense on the level of, “Together, we can go there together.” Its the sort of film that sends discriminating filmgoers storming for the exits, that is unless its all an obvious joke.

The crowd I saw this with certainly had a good time, but I did notice that to a man, they bore a striking resemblance to Comic Book Guy from the Simpsons. That is not to say that only nerds can appreciate ironic entertainment, but they were laughing as hard at the end as they were the beginning, and Im not sure anyone but the virginal set would still give a shit after such a length of time. My favorite scenes were the early interactions between Fleming and the skeleton, largely because the earnestness of the performances seemed to carry me back to the time when they really meant this kind of shit. I suppose we are at a time when it is impossible to comment on films that are their own commentary, but Im glad to see a B-movie wannabe enter the marketplace from time to time, if only because it wont star Adam Sandler or those damned Olsen Twins.