Let me come right out and say it; I’ve never been to Japan. That said, my biggest gripe with Little Coppola’s Lost in Translation
is that I am pretty sure 9 out of 10 Americans would have shot the
exact same footage for the first thirty minutes. “Those whacky Japanese
don’t speak Engrish’ very well, do they! Tokyo has lots of bright,
crazy lights and fucked up super-robot billboards! Boy, are they some
short little motherfuckers! Ha ha!! Crazy man, totarry’ whacked out
crazy shit!” Even though I have never been, I spend a good chunk of
time every week reading up on Japanese “culture” via Ruthless’s very own Schultz, blogmeister of the awesome Tokyo Damage Report.
Basically, what I want to say is that I am not fucking oblivious. Ever
since my friend told me he wanted to buy–but couldn’t afford–junior
high school girl’s panties out of a vending machine, I have been well
aware that things are different, even a bit peculiar, over in the land
of the rising sun. Anyone over the age of twenty should be well aware
of this. Contrast this with the fucking nitwit sitting next to me in
the theater who kept saying, “What the fuck is going on?” every time a
curtain opened automatically or some footage of a Japanese game show
was shown. I’m bitching about this because I feel that Coppola Jr. was
trying to make a sophisticated movie, one that would transcend the fact
that her father is who he is and not be exploitive; more importantly, I
wanted to see a film that rose above her trust fund and actually
crossed into excellent, unforgettable cinema territory. Making
half-wits guffaw at an unfamiliar culture is no accomplishment. 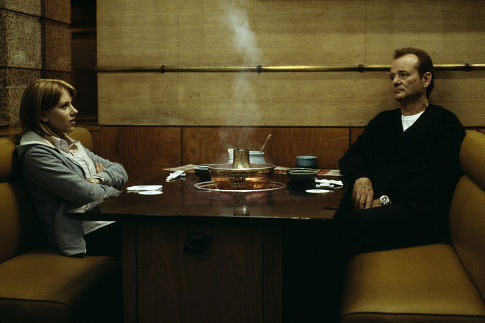 The “general malaise” factor of the two main characters (Murray and
Johansson) was a bit difficult for me to swallow. “Oh woe is me… I’m
stuck in boring Japan. Whatever shall I do?” Granted, much of
that was jealousy on my part. I would love to one day get to a station
in life where staying at a five-star Tokyo hotel and getting paid
$2,000,000 to shoot a booze ad was boring and/or old hat. Because of
who she is, Sofia Coppola might be the only person that could have made
this film. But–and this is a big, big, big but–if you cast aside all
that I just wrote, Lost in Translation is a good movie. I
laughed. I loved nearly every second of Bill Murray–it really is a
shame that it has taken casting directors this long to realize how
supremely talented the man is. I wanted to squeeze Scarlet Johansson.
Constantly. Just squeeze her. Of course, she is nineteen years old, and
even though there is a fairly hysterical scene in Lost where a
“typical” Hollywood bitch denies she is anorexic, Scarlet will no doubt
watch this movie, decide that she looks fat, and pull a Christina
Ricci; she’ll become just another cinematic emaciated stick figure. A
big head on a rack of ribs. Savor Johansson here, for in film the
female form rarely, if ever, looks as magnificent. Or as chewy.

Back to Murray. Man, he just excels. Not quite as much as he does in his best film, Rushmore. Regardless, he still steals every scene. Remember that he is a full thirty-four years
older than Johansson. Thanks to Murray’s unparalleled chops, the age
gap is never, ever an issue. The chemistry between the two principles
is as good as I have ever seen. Think Hoffman/Bancroft, seriously. And
there is this one scene… see, Murray’s character, Bob Harris, is a
movie star. Apparently a Gene Hackman-type (two American businessmen
who recognize Harris compliment him on “doing his own driving” a la Popeye Doyle).
As I mentioned, Harris is in Japan shooting a series of commercials for
a whiskey company. He is also on the outs with his wife of twenty-five
years and just generally jaded. Johansson’s Charlotte is the slightly
suffering wife of Giovanni Ribisia fashion photographer who seems much
more interested in his work than his wife. While never really given a
fair shake by the script (he is either shown snoring after a presumably
long day of work, or running out the door–much to Charlotte’s
displeasure–to go to work), his character seems like a moronic turd.
If I was an extra-nubile young woman, I would ditch photo-boy in half a
heartbeat given the choice of him or Murray. I’m gay like that. 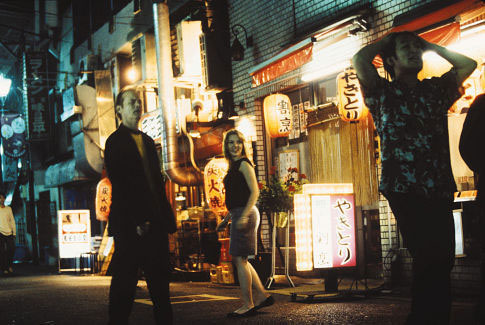 Ribisi does, however, get to deliver the film’s stand out funniest line, though I am sure it was unintentional.
See, Charlotte complains to Murray that her husband thinks she is
“snobbish.” The lone piece of evidence provided for this assessment is
Charlotte’s dismissal of Ribisi’s friend Kelly (Anna Faris), an
anorexic twit Hollywood starlet who is coincidently in Tokyo promoting
her latest movie, one in which she stars alongside “Keanu.” The exact
dis has something to do with Kelly checking into the hotel under a fake
name that is in fact a man’s name. When Charlotte points this out,
Ribisi snaps, “Not everyone went to Yale!” I was on the floor. Yes, my
friends, Johansson’s character has a philosophy degree from Yale. How
this differs from Patrick Swayze’s character in Road House
being a philosophy major from NYU is really a matter of degrees… At
least Bill Murray was playing an actor and not a surgeon.

Back to the scene I meant to get to three paragraphs ago.
Harris and Charlotte return to the hotel very much in love. They spent
the night having all sorts of Tokyo-induced fun. First a hip club, then
a hipper house party, then some gooby karaoke, and then… both of them
are of course married and they, out of ritual only, return to their
respective rooms alone. Murray phones his wife, possibly to share the
joy he is experiencing, but we all know you can’t do that. “Honey I
just had the most incredible time with a woman half your age” will
never, ever fly. Such is marriage. Instead he tries to tell her about
the “really good” music he heard and how interesting the house was, architecturally,
and he just cannot communicate anything. After his wife hangs up before
she hears him say “I love you,” Murray utters, “That was a bad idea.”
This scene is as moving and poignant–and, more importantly, as
honest–as any I have ever seen. Murray is up for Best Actor and he gets my vote for that two-minute moment alone. 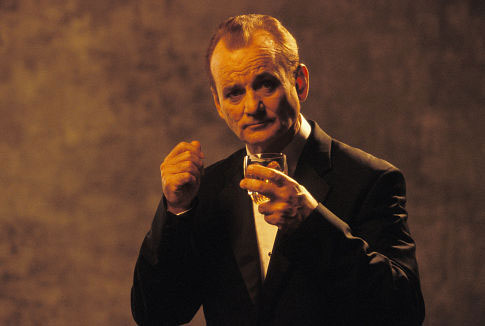 Lost in Translation is a love story and it has its “arc”
(Murray gets drunk and shags the hotel’s lounge singer, which pisses
Charlotte off-cause she’s in love with him), which I found
unfortunate. The story was strong enough that the standard three-act
plot could have been chucked out the window. Once the Ribisis and the
Farises get largely expunged from the script, the engrossing give and
take between Murray and Johansson was strong enough that I wanted to
see them end up together, fuck everyone else around them. Life is short
and if you find what you are looking for run with it, etc. That said,
the sweet and sour ending still left me satisfied. Should Lost in Translation take home Oscar gold? Well, compared to the other films it is up against (Mystic River, Seabiscuit, Master & Commander, and Return of the King) I would say Lost and King are in a dead heat. I’d actually give the nod to Peter Jackson and Return of the King, though there were several much better films from last year that were (of course) overlooked, namely Capturing the Friedmans. I’d even say (though it is very un-criticy of me) that I enjoyed Bad Santa more than all those films, some of them put together. However, Lost in Translation is the best film I have seen in several weeks (new film that is–I watched Bananas a week ago), and that is saying something.