An odd little duck of a movie, this Lord of War; at
once trivial and deservedly lost in the shuffle of
post-summer releases, while also one of the most
damning indictments of the business of death in many a
moon. It’s the sort of film that will either meet with
a stunned, embarrassed silence, or will stoke the
fires of neo-conservative bloodlust, at least those
who continue to believe that liberalism is so
pervasive and fanatical that we’re but one step from
complete submission. Slick, self-righteous, and
oh-so-noble, it’s also cursed with Nicolas Cage at its
center; an actor so aloof and tired that it’s all he
can do to deliver his lines. He’s terribly miscast, as
usual, and the film would have been far better served
with an unknown in the lead; someone who could lend
far more credibility to the Ukrainian-born Yuri Orlov,
who now traffics in the worldwide sale of deadly,
often illegal arms. Cage is reliably smarmy and surly,
but we never believe that he could consort with madmen
and wily dictators, for he shows his hand at every
opportunity. He’s still a punk kid turned lunkhead who
can’t seem to decide what we wants to be when he grows
up. He’s not a man with roguish connections; he’s taking your
order at the Burger Barn.

Director Andrew Niccol has crafted an entertaining,
reasonably good time here, but it never takes off as
we’d like it to. The skeleton is here for a truly
revolutionary film, but the flesh never appears.
Still, Yuri’s globetrotting ways reveal bold strokes
about the amorality of world politics, and how every
single one of us has rationalized the wholesale export
of violence because it keeps us in comfort. Yuri has
no real conscience (he even says at one point, quite
logically, that “cars and cigarettes kill more people
than guns do”) but it’s bad for business if he does;
and what’s more, he doesn’t imagine that the CEOs of
General Motors or Philip Morris toss and turn with
pangs of guilt. He’s providing a service, much as any
entrepreneur would, and if he were to go away, there
would be a replacement within minutes. Moreover, he’s
actually an agent of the state, for when presidents
and otherwise “respectable” governments don’t want to
get their hands dirty, he steps in to supply weapons
to those who might serve our nation’s interests. But
he really doesn’t take sides, and he’s not above
providing the machinery of murder to those who may
turn around and use it on his fellow countrymen.
That’s just the way it’s done. Art imitates life. 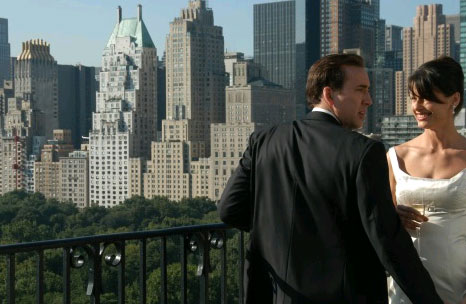 When the film visits assorted hot spots around the
world — Sierra Leone, Liberia, Ukraine, Lebanon — it
is at its best because of the striking, unavoidable
truth that ideology, as meaningful as it might be for
those at the bottom (what drives those holding the
weapons, after all?), is wholly absent at the top.
It’s about money, of course, and as long as someone is
paying, his actions towards his fellow man are
burdensome, if not irrelevant. I know, I know: “the
world is a business,” big fucking surprise. The
originality is not in the sentiment, but in its
existence on the big screen. For while Hollywood has
tackled race, gender, and even sexuality with rare,
but tangible nobility and power, it almost never
grapples with the stinging truth that principles,
values, and morality are empty terms used by the power
elite to keep us compliant. There is only the bottom
line, and every man, woman, or child who has died on
the field of battle has done so in the name of profit,
usually of the corporate variety. It’s hardly unique
to the United States, but as we tend to puff out our
sanctimonious chest most often, it makes more sense to
hold us more accountable. Last time I checked, the
Sudan wasn’t attempting to lecture the world about
democracy and freedom.

Lord of War, then, will not educate the jaded, the
cynical, and the misanthropic, for we long ago put to
rest the quaint notion that mankind was worth saving.
We’re greedy, vain, and hopelessly vile, so let’s move
forward the final conflagration and stop fooling
ourselves. And yet, there are a few naive idealists
about who still cling to better days and that
“wonderful world” of poetry and song, so this film
might serve the purpose of enlightening those
remaining holdouts. I nodded at the obviousness of it
all, but others might recoil with horror, come to new
conclusions, and sign on to the cause of nihilistic-fury. That might not be so easy given this film’s
limited reach (and appeal), but anything is possible
in a cinematic world where penguins continue to light
up the box office charts. And perhaps the film will
make just enough money to attract some Fox executive,
who will then compel his minions to blast away at the
left-wing propaganda that dares to suggest that death
is the biggest business of all. 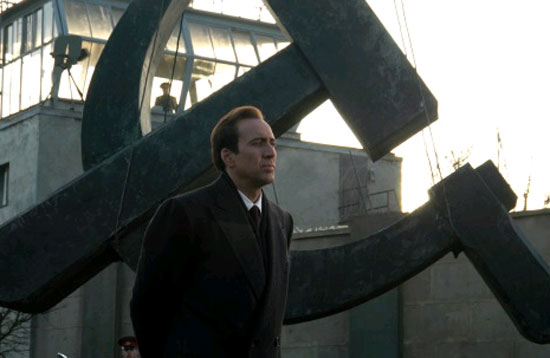 And hey, what is a film like this without the small
moments? I especially liked the wry observation from
Liberia’s president that because of the U.S. Supreme
Court’s installation of Bush in 2000, the rest of the
world would no longer have to listen to Americans
lecture on the sanctity of fair and open elections.
This comment (in the movie) was made before the
current debacle in Iraq, but it’s always nice to hear
a truism expressed by a foreigner, although that’s
usually how it’s done in a country that no longer
possesses a vigorous and independent press.

The film’s primary weakness is the subplot involving
Yuri’s romance with a bubble-headed model, who
eventually becomes his wife. The side story is clearly
meant to show how Yuri is cold and heartless in every
facet of his life (he even remarks in the narration
how one might as well lie at the outset of a
relationship, for that is what it will become in the
end anyway), but it just bogs down the proceedings with
the standard flirtations of conscience that have no
place in such tale. Oh I see, he has a family now —
will he trade in the briefcase for legitimacy? To the
film’s credit, he does not come around, and even gets
away clean in the end, despite the determination of a
high-minded federal agent (played by Ethan Hawke).
Yuri loses his wife, child, and parents (they disown
him), but immediately after his release, he returns to
the game that has given him so much. It is not for the
money, as he states, but rather because he is so good
at it. We never really understand why or how (I
wouldn’t even buy a refrigerator from such a man), but
this isn’t a masterpiece we’re discussing here — only
a passable (and preachy) cautionary tale about the
loss of a man’s soul. Hell, there’s even the brother
(Jared Leto–vomit) who is so troubled by what he’s doing
that he sacrifices himself; a martyr to goodness and
the love of man. He’s a fool, of course, because the
deal he tries to stop is carried through anyway and
dozens of Africans are massacred. 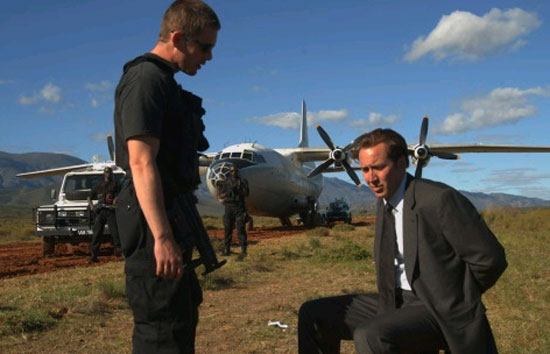 So is this a recommendation? In a sense, yes, but less
for the movie itself than for what it attempts to convey.
Perhaps, then, the right-wingers would be right in
that this is agit-prop with a singular goal in mind,
but they would flatter Mr. Niccol by claiming the
world will pause to notice. I suppose, then, I am
guilty of the same crimes as those who rave endlessly
about those Mormon movies, financed and directed by
the Church itself. Those films are shabby,
overwrought, and largely incompetent, but viewers
don’t care about production values so much as the
final message. They’d be receptive if you showed them
“Jesus Saves” flashing on a black screen for an hour
and a half. While Lord of War is nowhere near the
ineptitude of those religious productions, it is a
slave to its viewpoint more than it is a great movie.
Because I agree with what it says, I am inclined to
play along, but Dr. Strangelove this ain’t. But I
hardly expected an earth-shattering event anyway.
Sometimes it’s enough to meet a fellow traveler who
confirms your worst fears, nods wearily at our
powerlessness, and sends us into the crisp afternoon
with one less reason to stay alive. On this day, it’s plenty.