Home / Reviews / Movies / LORD OF THE RINGS THE TWO TOWERS

LORD OF THE RINGS THE TWO TOWERS

As my friend Phil said as we walked out of the theater, “I can’t believe other people watch this and then go off and make The Wedding Planner“.  Indeed. What Peter Jackson has done is nothing short of miraculous. Any shortcomings the movies have are Tolkien’s fault, not Jackson’s.  Sacrilege you say? Hopefully, but two midgets riding around on top of a talking tree for an hour? Jackson did the best he could. I read all three books when I was about eleven. I thought the talking trees were a little gay then, too.

Whatever my review might be, it just pales in comparison to visual masterpiece that Jackson and Co. have turned in for the second installment of the Lord of the Rings trilogy. First thing is first; Gollum just totally and completely rules. I’ve seen many movies and many video games and many computer-animated characters, and Gollum trumps them all. Why? Principally because he can actually emote, a trait that George Lucas seemed not to care about when unleashed Jar-Jar upon us all. Remember when Lucas was saying that fully CG characters are the future of film? I was his harshest critic.  Well, I’m eating my words, because Gollum is fully digital, and fully believable. Just an outstanding job by that chubby New Zealander and all the geeks in his employ. 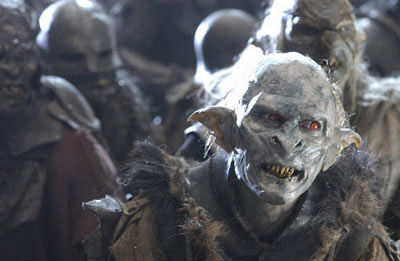 Secondly, the big, seemingly never ending battle at Helms Deep is mind-boggling. You know that everything you are looking at is digital, but after about three seconds you forget that and instead all you can do is look at the slaughter and the carnage. There is a part where this big wall gets blown up and huge chunks of brick are flying out all over the place and squashing the Uruk-Hai (Had to look that one up) and you can feel the weight of the bricks as they land and flatten. Double wows. The battle probably takes a good forty-five minutes to unfold and I wasn’t bored for a second. Even though it was practically chaos, Jackson kept the whole event churning along right up until Gandalf comes riding down the hill with the horse-dudes to save the day.

That Orlando Bloom kid who plays Legolas, the arrow-shooting elf, is turning into a major bad ass. While I am normally against the trends of our day influencing tales that are supposed to take place in the past or whenever, the part where Legolas rides a shield down the stairs (skate-boarding in Middle Earth?) didn’t upset me as much as I thought it would. Especially because at the end of the sequence, as he is shooting Uruk-Hai as fast as he possibly can, he runs out of time to properly set his arrow on the bow, so he just stabs a dude through the eye with it. Awesome. There is another scene that anyone who has seen the movie will immediately know, where Legolas is in front of a horse and he somehow reaches around the thing’s neck and jumps on its back, that is not only breath taking, but is the definitive moment where not only Legolas’s character emerges from Aragorn’s (Mortensen) shadow as the chief ass-kicker, but where Jackson divorces himself from Tolkien’s looming presence – nice books old man, but you’re dead and I’m in charge. Phenomenal. 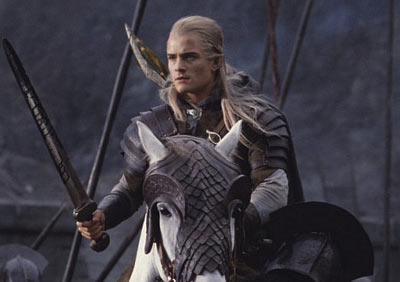 Plot? Not that it matters all too much because the visual feast we were treated to satiated almost all of my movie appetites from the get go, but basically, Frodo and Sam hook up with Gollum and are still trying to break into Mordor to destroy the Ring of Power. Frodo is on downers. Gollum has a split personality and sometimes wants to hurt but more often than not wants to help the two hobbits. Aragorn, Legolas and Gimli are trying to track down Merry and Pippin, who were kidnapped at the end of the last one. The three heroes bump into Gandalf and he tells them that what they have to do is help out this king guy and save all the humans from being slaughtered – which they do. Oh, and Merry and Pippen ride around in a tree for an hour. But, so what? Before Jackson got involved, the only people who cared about this crap were dudes who could speak Klingon. Now, my ophthalmologist is just as into it as any Romulan sub-commander.

One of our site’s most hated adversaries, the Filthy Critic, employs this cute technique of pretending he is a twelve year old boy when he revues Sci-Fi movies. Well, I felt like a twelve year old boy for almost the whole of this movie. Yeah, the talking tree parts were boring. Of course I thought it was cheap that Jackson used Rhys-Davies voice for the Tree Beard character [Ed Note: John Rhys-Davies also played Gimli the Dwarf] instead of finding someone else. Sure, there were a few times when I thought Elijah Woods and Sean Astin were going to start making out with each other. Indeed, I thought Gandalf seemed a little weird this time out. And yes, that middle sequence with the love story/dream where Aragorn and Arwen (Liv Tyler) were breaking up or something was long, slow and dull. However, in context with the rest of The Two Towers I was ready, willing and able to suspend my disbelief (as well as my critical faculties) and let my jaw drop to my lap and enjoy, enjoy, enjoy this masterful work of movie making. I’ve seen this second Lord of the Rings in theaters twice already, plan on seeing at least once more and will be purchasing the DVD. And of course next Christmas, I’ll be lining up with the rest of you to see The Return of the King. Because I like my inner child.

Good job, Mr. Jackson. The Two Towers is what fantasy movies are all about.

I don’t think that Jonny has COMPLETELY LOST HIS MIND. The TWO
TOWERS is a good movie compared to most of the crap that gets reviewed
and eviscerated on this website. BUT It’s just not good COMPARED TO
PART ONE!!

I’m not denying that Gollum was amazing or that Ents are the
shit. OF COURSE ents are the shit. And Gollum should be cast instead of
Tom Hanks or Meg Ryan in every romantic comedy from now on. BUT I don’t
see how Jonny’s razor-sharp mind could overlook the following . . .

I can see how Jonny would like the movie IN SPITE OF this bullshit, but
to not even NOTICE the bullshit is odd. Hopefully part 3 will be better,
but I’m more looking forward to Gollum starring in GLITTER 2.