From the team that brought us the best of the drooling, infantilized
man-child, comes a remake nobody asked for, nobody needed, and no one
will remember once the month of May is complete. Adam Sandler had all
the makings of a Pauly Shore or a Yahoo Serious, and yet he remains —
defiant, rich, and ready to offend at a moment’s notice. This, men and
women of the Armed Forces, is what you are really defending.

With Sandler involved, how whorish did things get with product placements?

Diet Coke, Reebok, Lays, Gatorade, ESPN, and KFC were all shoehorned
into the story to line some corporate suit’s pockets. The greatest
offender (big surprise) was McDonald’s, as I witnessed no fewer than
six Quarter Pounder wrappers being shoved into the camera during the
course of this bloodbath. For fuck’s sake, there was even a character
nicknamed Cheeseburger! I heard “McFlurry” dropped a few times, and
someone’s balls were even referred to as “McNuggets.” I would not have
been surprised had the warden dressed up like Mayor McCheese for an
impromptu musical number involving break dancing Big Macs. 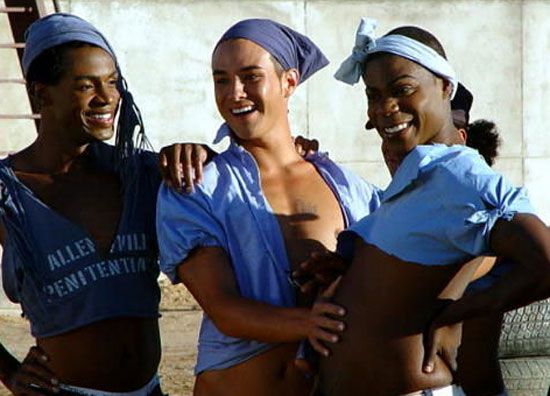 Groan… So who is Adam Sandler this time?

He’s ex-All Pro quarterback Paul Crewe, an arrogant little shit who
was banned from the game for shaving points. He’s been a drunk ever
since, and as we meet him, he’s stealing his girlfriend’s car for a
high-speed joyride through downtown San Diego. Arrested and sent to
jail for three years, he becomes the star of Allenville Penitentiary
in Texas, which means that he catches the eye of the ambitious warden
who wants him to impart his football skills to his guards, who happen
to be a top semi-pro team in the region. Once he’s asked into the
warden’s???

Fuck it, man–that’s enough, I really don’t give a shit about the story.
Who else is in this colossal waste of time?

Chris Rock is Caretaker, the standard black sidekick who will befriend
Paul, show him the ropes, and eventually die at the point when Paul
needs him the most. Burt Reynolds also turns up in a glorified cameo,
largely so that audience members can point at the screen and whisper,
“Hey, I hear he was in the original.” Oh yeah, NFL pricks Brian
Bosworth and Bill Romanowski also turn up as sadistic bullies, which
makes this as close to a documentary as they’ll ever know. And James
Cromwell is the warden, which means that his career, once thought
merely dead, is now officially writhing in pain one last time.

Chris Rock? I suppose he’s the one who utters the old chestnut, “Can’t
we all get along?”

Indeed he is. Sorry to be the bearer of bad news, but I have yet to
see a big budget action/comedy with a prominent black star where that
line wasn’t used. Fifty years from now, Rodney King will still be
treated as topical humor, even though America hasn’t thought about him
for years. And yes, Rock also manages yet another crack at O.J.’s
expense. Would they please move on? Why not Medgar Evers? W.E.B.
DuBois? 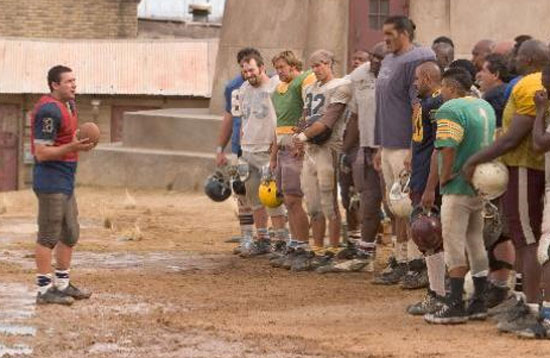 What about Sandler favorite Rob Schneider? I suppose he’s on board?

Doing what he does best, of course, which is repeating the mantra,
“You can do it!” Yeah, I get it — Sandler and Schneider are good
friends, and this is, like, a joke that goes back fifteen years or so,
but Jesus H. Cuntlicker, is anyone but those two untalented dipshits
still laughing? Hell, even the Colonel guy from The Waterboy shows up.
And yet, despite a formula that pre-dates fire, Sandler continues to
churn out modest hits. Fuck 16-year-old males.

Anything else we’d expect in a film aimed at teenage boys with raging hard-ons?

A kick-ass soundtrack, of course, with the obligatory slo-mo scene at
the big game where AC/DC’s “Thunderstruck” kicks in. And then there’s
the hateful gay-baiting, with a group of transsexuals and painful gay
stereotypes meant to disgust an audience expecting to see female tits.
Interestingly, though, the gay characters become the cheerleading
squad and during the final game between the convicts and the guards,
they are shown at least a dozen times; most of the time in sexually
suggestive positions. Is it possible to be so anti-gay and homoerotic
at the same time? And I really don’t have time to get into the endless
anti-fat people jokes, groin shots, and references to oversized cocks. 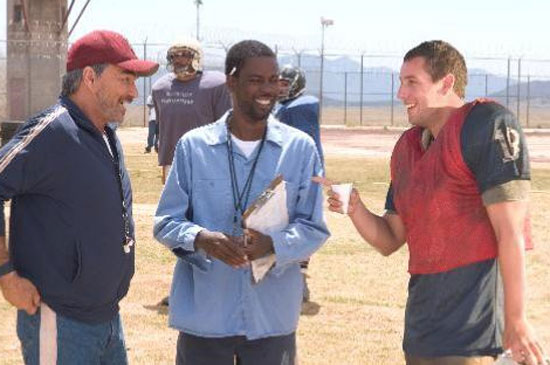 That’s it? What about that big game?

It goes without saying that the final contest goes something like this:

Does that evil warden get his comeuppance?

I’d say he did, but when the two convicts pour a huge jug of Gatorade
on his head, I couldn’t help but think that it was one last effort to
squeeze out some additional commercial dollars.

Let’s see here……we’re meant to cheer for the criminals? What kind of
liberal nonsense is this?

It’s a curious thing indeed to have a film celebrating convicts in
such a law-and-order nation, but it’s even more curious to note that
the crimes for which these men are jailed are not identified. Would a
filmmaker, even someone serving Sandler’s dubious agenda, have us
cheer along to the antics of rapists, child molesters, and serial
killers? It’s chickenshit to act so “rebellious” and yet keep crime
out of it. Still, I must have no problem pumping my fist for a
murderer — I am a Ray Lewis fan, after all.