As many of you know, I often get–oh how to put this–a little upset at the ignorance of others. This is only because my own gaping ignorance is a continual wellspring of pain, shame and self-loathing and you know how your worst traits are the most annoying thing about other people. Honestly, this site is called Ruthless Reviews and only just the other day did I watch one of the most Ruthless motherfucking movies ever made. Long Good Friday is a powerhouse of a good gangster flick, front loaded with two of the finest performances you are ever likely to see. Bob Hoskins and Helen Mirren just sizzle and compliment each other like few other onscreen duos. He is all rage and strength; rash brutality, to her cunning, strategy and instinct for self-preservation. But again, I’m just kicking myself that I have lived this long and not seen this film before now. And this film just turned twenty-five, so I really have no excuse. Ignorance…

I first heard about The Long Good Friday way back when Ruthless was getting going. One of the first films reviewed was the very, very Ruthless and enjoyable Sexy Beast. I became curious about British gangster flicks and was doing a little studying when I ran across something mentioning that The Long Good Friday was a predecessor and inspiration to Sexy Beast. Being an ignorant little shit, I was like, “yeah right.” Well people, the truth needs to be told. Sexy Beast ripped off one of its best scenes directly from The Long Good Friday.  Remember when Don Logan landed in Spain and was marching through the airport like a “Scud missile?” Just prior to when we first meet Harold (Hoskins), we see a Concorde docking at the terminal. Unlike Sexy Beast, which did sport a pretty decent albeit “retro” soundtrack, Harold struts–and I mean struts–through the airport to some bad-ass late seventies jazz/new wave that very much made me smile. Taking nothing away from Kingsley, but Harold looks like a cross between a pitbull and… and, well, another pitbull. Any of you remember the scene in The Terminator when Ah-nold is looking for Reese and Sara in the parking garage and he scans back and forth, left and right, like a great white shark? Guess what Hoskins was doing as he was making his way out of the airport? Checking every single cunt out to see who wanted some.

While the rest of the cast was pretty great (especially Mirren), please allow to just linger on Harold for a second. I mean, how can you not obsess over a character who says stuff like, ” I’ll have his carcass dripping blood by midnight?” Actually, Harold is a bit more witty than that, a bit more eloquent. My favorite line of his, uttered with more disdain than most actors could conjure up in a lifetime, was, “The Mafia? I’ve shit ’em.” I probably oughts to tell you a bit about the plot of the film so as you have some point of reference. Harold runs London. Just simply runs the fucking place.  Everybody is in his pocket and on the take. Especially it seems, the police. He has some grand scheme to turn a bunch of abandoned docks into a giant real estate development. To carry out his master plan, he gathers not only London’s wealthiest denizens, but also a guy from the New Jersey mob. However, trouble is a brewing, and on Good Friday, his Mum’s Rolls Royce gets blown up, killing the chauffer, his best friend gets stabbed to death by Pierce Bronsnan (one of his very first roles), and a bomb is discovered at his casino. To further fuck up his scheme, as Harold is attempting to impress the Jersey mobster by taking him to one of the former’s pubs (which he of course owns) it gets blowned up as they pull up. 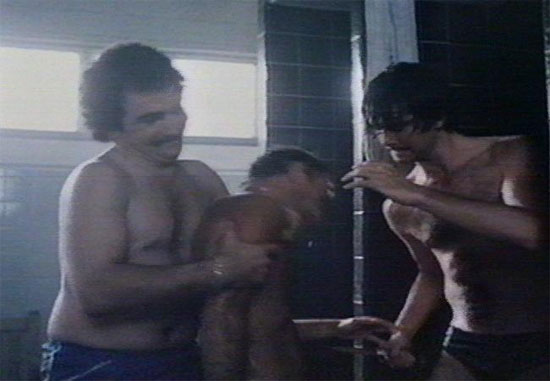 The gest of the film involves Harold trying to figure out who is throwing salt in his game, and why. He really is perplexed as the following exchange of dialogue with his right hand man, “Razors,”illustrates:

Harold: Who’s having a go at me? Can you think of anyone who might have an old score to settle or something?

Razors: Who’s big enough to take you on?

Harold: Well, there were a few.

And try as he might, Harold just can’t figure it out. So he calls a meeting of his goons (who he calls “The Corporation”) and instructs them to round up all the gangsters in town not directly working for him. This plan culminates in one of the most brutal shows of force ever captured on film. Harold’s men deliver the “suspects” to a slaughter house in a refrigerated truck; bound gagged and hanging upside down on meat hooks. One inside Harold simply tongue-lashes the helpless men and I was positive we were about to get treated to a British Valentines Day Massacre when the crooked police inspector shows up and informs Harold that it is the IRA (or as Harold calls them, “the pig-eyed Irish”) that is blowing his shit up all over town. You really gots to see this movie, man.

Rarely do films inspire new Ruthless (those things in the upper left corner of every page–hit refresh to cycle through them/drive up our hits), but Harold not only deserves one, but I might have to remove a few as they are so below par, in comparison. Heres a small list of some of the more hyper-agro shit Harold pulls. While bracing a “grass” (Brit-gangsta speak for an informant/stool pigeon), Harold hands Razors a machete and the truly menacing henchman (P.H. Moriarty) begins slashing at the naked dude who can do little more than scream and keep both hands over his dick. Oh yeah! Before the knife fighting, Harold finds the grass in bed with a woman. As Razors and another sidekick (Jeff, played by Derek Thompson) drag the naked man into the kitchen, Harold is brooding around the room and finds a heroin needle bedside. He starts commenting on how it used to be such a nice neighborhood. Then he looks at the needle and says, ”Filth. Here have some more!” He then flings it at the naked doped out chick like a dart. Fuck! I almost forgot that just before they get to the grass’s house, they stop and ask a mechanic working under a car which house it is. The mechanic says he does not know, so Razors kicks the jack holding the car up out from under it. The mechanic manages to roll out and he screams that Harold almost killed him, to which Harold answers, “I don’t like looking up a man’s nostril when talking to him.”  Harold breaks a scotch bottle over a man’s head and then stabs him with it in the neck. Repeatedly. And finally, there is the end of the film.  I won’t explain why or how, but suffice to say, the entire last scene is just a close up of Harold; his face contorting and convulsing with inspired anger and rage and it is oh so beautiful.