Melting clocks are OK, but I like surrealism with a malicious edge.
The breaks from reality and convention should feel like assaults and
the absurdities should expose, satirize and even ridicule. That’s how
things are in Little Otik, which became one of my favorite movies about 10 minutes after I started the DVD.

An infertile couple takes some time in the woods. The husband
carves a tree stump into a baby. The wife instantly treats the stump as
a real child. The stump comes to life and begins eating people, which
is more or less OK with mom. Mother love is portrayed as a selfish,
animalistic, need requiring an outlet, rather than the product of a
dedicated, personal relationship. More broadly, the film conveys a
Swiftian disgust with the animal functioning of human beings,
especially eating. 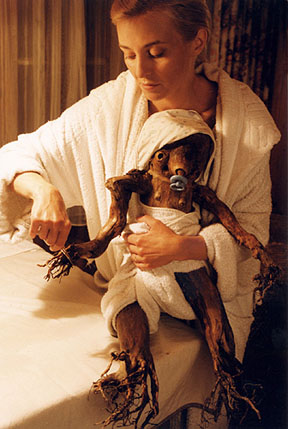 As Jeremy Heilman of moviemartyr.com points out, Little Otik bears a strong similarity to Peter Jackson’s zombie flick, Dead Alive. A very
strong similarity, from the disgusting food, to the creepy mom, to the
camera angles to people and pets being eaten. It’s possible that Otik is heavily borrowing from Dead Alive. You could almost argue that it’s a rip off. I don’t really care. As much as I love Dead Alive, I love Otik more. The biggest reason I love it so is that streak of maliciousness, but there’s also Jan Svankmajer’s
unique imagination. You will see things by watching this film that you
would never, ever see otherwise. And this movie is as funny as, if not
funnier than Dead Alive.
Most of the humor is based on absurd imagery and doesn’t translate well
to print. Try to imagine however, stop-motion animation of a tree stump
carved into a vaguely human form, dressed as a baby, sucking down
carrot soup from a bottle. That will instantly appeal to about one in
four of you, who should go to any lengths track down this classic.