Of this I am certain — Little Nicky is either the worst movie ever made, or the best commercial for Popeye’s Chicken yet released. I’d opt for the first option every time (as I hate Adam Sandler with a murderous rage eclipsed only by my loathing of the sound of young children at play), but there is no denying that in a career full
of product placements and corporate whoring, Little Nicky
shills, shucks, jives, and performs backflips for the taste of that
good ol’ fried chicken. I’ll have to work from memory here, but I
recall at least six verbal mentions of the product, at least three more
on-screen appearances of Popeye’s containers, and a few more references
that were some form of “Popeye’s is fucking awesome!” Why Popeye’s
would want “fucking” associated with their elegant cuisine is beyond
me, but apparently they know their target audience better than I do. I
might be mistaken, but I don’t believe Sandler visits an actual
Popeye’s establishment, but he more than made up for that omission with
his extended visits to Subway and Wendy’s in two of his other
atrocities. At least we know what Sandler fans are most likely to eat
while they waste away not reading.

This time around, Sir Sandler plays the child of Satan, who is
sent to Earth to capture a demon who has his eyes on the Big Chair in
Hell. Or something like that. Nicky ascends to the surface, meets up
with a talking dog, moves in with a typical Sandleresque gay man (i.e.
every ounce the homophobic stereotype), and falls in love with a member
of the Arquette family. Of course, Sandler has a speech impediment,
this time as a result of being hit in the head with a shovel. He also
has a deplorable haircut, and insists on wearing a thick coat
throughout. And did I mention the two heavy metal dolts he befriends?
Being fans of hard rock, the two (of course) worship the devil and love
the idea that they have met a child of the Prince of Darkness. Add to
that Reese Witherspoon as Nicky’s mother, a curious role given that she
resides in heaven. And before I forget, Ozzy shows up at the end for no
apparent reason, and Quentin Tarantino provides a cameo as a street
preacher that sets new standards for, well, Quentin Tarantino cameos.
It is difficult to imagine — but nonetheless true — that Tarantino is
worse than the rest of the cast, but I’m sure you knew that already. 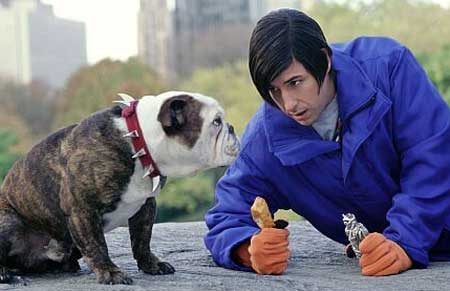 Nicky continues to get “killed,” sent back to hell, and brought back to
the surface in order to fall in love, save his father, and yes, sire a
few children of his own. It is all decidedly unfunny of course, with
one of the most laugh-free screenplays ever penned. Not a chuckle, not
a guffaw; not even a smirk. It makes perfect sense that I saw this
testament to human depravity at the dollar theater in my old stomping
grounds of Thornton, for what better way to experience bad cinema than
with people who feel they are in the presence of art? If at any time in
my life I begin to think the human race is worth saving, I will
remember the day I saw Little Nicky and come face to face once
again with my airtight case for mankind’s flame-filled eradication. I
should have been content with the fact that for a Sandler film, Little Nicky
was a flop, but there are at least one million people who saw it, and
I’m guessing at least half thought it was worthwhile. Imagine that
staggering truth — there are no fewer than 500,000 Americans who loved
this film. And a good percentage of those mouth-breathers most likely
own the DVD! So, dear readers, many of whom talk endlessly about the
“greatest country on earth,” you may write your essays and columns
about the Stars and Stripes, citing philosophers, historians,
politicians, and even clerics. I, however, have these facts. Case
closed.