Premise: Dieter Dengler emigrated from Germany to the U.S. at age 18, then joined the Navy in order to realize his dream of becoming a pilot. He was promptly shipped into the early stages of the war in (and around) Vietnam, where he was shot down and captured. Eventually, he escaped and found success in the U.S. but he is still haunted by the memories of the unfathomable suffering he endured in Laos and Vietnam.

This DVD should shut anyone the fuck up. This is the perfect film to show someone who complains a lot about his lot in life, like one of those assholes who thinks he’s some kind of martyr because he had to go to UCLA instead of Stanford due to affirmative action. If you show someone this film and he complains about his petty woes any time during the next month you are legally entitled to beat him with a heavy tool of your choosing.

This is one of those survival stories that includes suffering, perseverance luck and drama of a magnitude that is literally difficult to comprehend. The cliche that this story wouldn’t be believable as fiction doesn’t come close to conveying what this man went through and what he overcame. I think it would ruin the film for me to write much about the specifics of what happened in the jungle, but here is one fact that sort of gives you an idea. Dieter is a normal sized man, I’d guess something like 5’9, 160 lbs. When he was rescued, just after clawing through the jungle and an array of obstacles, he weighed less than Calista Flockhart after a bout with food poisoning. Seriously. 84 lbs.

But this is much more than an incredible story. It’s a Werner Herzog film and a work of brilliance. Herzog takes Dieter to the three most important locations in his life and the story of the film. First the poor village in the Black Forrest that was his childhood home. It was here that Dieter first saw airplanes and wanted to become a pilot, which is pretty amazing in itself, considering that the airplanes were allied bombers destroying the village. The second location is Laos, where Dieter was shot down and captured. Here, Dieter recounts and even reenacts some of what happened to him. The third setting is Marin County, the richest county in the US, where Dieter now owns a beautiful hilltop home. Even though the locations are mostly just backdrops for the verbal telling of the story, they help to bring it alive. 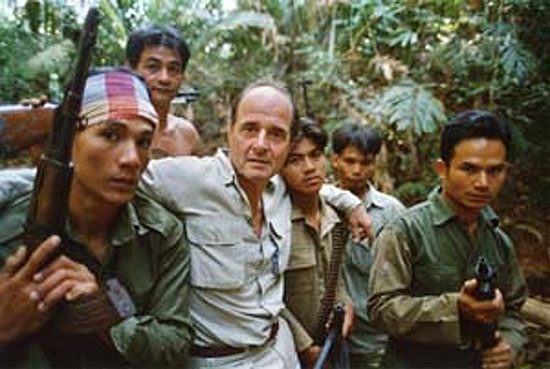 Dieter and Herzog take turns narrating the story and it’s always told deliberately, without melodrama or sappiness. The story is allowed to carry its on weight. Herzog does, however, come up with a few astonishing images to accompany the story, like gorgeous footage, played in slow motion, of a village in Southeast Asia being bombed. The footage accompanies Dieter’s claim that when he was going on bombing missions, the destruction on the ground was abstract to him, until he was shot down.

There are a lot of conclusions and ideas that might be drawn from this film. There’s something interesting in the pattern of Dieter’s life, for example. His childhood was in Nazi and post-war Germany, where his grandfather was the only, open anti-Nazi in the their village, a stand that carried a pretty high cost. Dieter was bombed and went hungry during and after the war, moved to America and was sent to bomb people in Southeast Asia, who caught, starved and tortured him. He returned to America and was declared a hero. The extremes of heroism and evil, and the way in which they seem to cycle through Dieter’s life are an amazing demonstration of the capacities of human beings.

One of the things that are great about the film is that Herzog doesn’t tell us what to think about these events. He brings his poetry and story telling abilities to the film, but refrains from tainting the story by editorializing, providing us with the content to build meaningful conclusions, but allowing us to build them for ourselves.

We also get some treats that only Herzog would think to provide. For example, in the middle of the film, he shows a Jungle survival guide film used by the military at the time of Dieter’s capture. It’s pretty funny, and Herzog goes into MST3K mode, saying things like “it’s always a good idea to bring along a portable radio.”