THE LIFE AQUATIC WITH STEVE ZISSOU

The stupidest thing I’ve done all year is not that I bought a ticket for Wes Anderson’s The Life Aquatic (“With Steve Zissou” added to make it sound even more precious), but rather that I returned to my seat after a prolonged restroom break. I didn’t want to come back, but I had left my jacket behind and hell, I actually wanted to keep the thing. Although my slow walk occurred only about an hour in, I was exhausted; not pissed, surprisingly enough, but physically worn down by the sheer absence of on-screen action. This is one of the most inconsequential and pointless films of the year; an exercise in self-satisfaction so lightweight that it threatened to float away. In fact, it’s so lacking in basic cinematic technique that it barely exists at all. There is no comedy, no drama, and hardly any structure. Instead, scenes pass by without once bothering to check if we gave a shit.

As such, there is no connective thread or reason that anything should be. This has much to do with the patently un-filmable screenplay hauled out of the irony drawer, but is actually the fault of the performances; yes, even the usually reliable Bill Murray. You, or any other film school student still immersed in Godard or whatever your bearded professor claims is genius can insist that the dry, lifeless acting is, like, intentional, and thereby a commentary on a specific genre (in this case, the nature documentaries of the 1950s), but you’ll be (typically) pulling shit out of your ass to make it seem as if you knew what in the fuck you were talking about. Everyone — from Murray, to Willem Dafoe, to Anjelica Huston, to (gag) Owen Wilson — sleepwalks through set pieces that alternate from the disjointed to the uninspired. In other words, I was even too bored to throw my soda at the screen. Instead, I slumped, shut my eyes from time to time, and waited the fucker out. 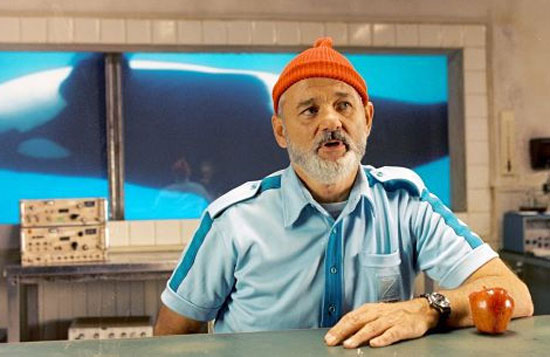 The story, if you must: a cranky has-been filmmaker named Steve Zissou (Murray), sets sail on another adventure with his wacky crew, this time to hunt down and kill a shark that has eaten his partner. To add to the “excitement,” Steve’s son Ned Plimpton (Wilson) shows up and, despite being a pilot for Air Kentucky (sigh), joins the mission. Also on board is a British journalist named Jane (Cate Blanchett, looking and acting like a complete moron), who is supposed to be writing a puff piece on the former giant, but is distracted by her love for Ned and her own emotional state (she’s pregnant). Add to the mix a smiling banker (there to protect a loan — don’t ask), a black dude named Pele (who spends all his time singing David Bowie songs in Portuguese — which itself seems like a parody of Anderson), a self-pitying German named Klaus (Dafoe), and Steve’s bitter rival Alistair (played with that usual “I’d rather be doing anything else” annoyance by Jeff Goldblum). There’s also Steve’s ex-wife Eleanor (Huston), who is called “the brains of the outfit,” but also seems painfully distracted, as if she’s fighting off a cold. With every move and half-hearted release of painfully banal dialogue, Huston wears her regret like a badge of shame. And for an added bonus, Steve’s boat is attacked by a band of Filipino pirates, who kidnap the banker and take him to a now deserted island where Steve and his first wife once shared a…….Oh, never mind. If I write it, it grants the film a level of dignity it surely does not deserve. Oh yeah, Alistair is rescued after being shot by the pirates during a poker game. He’s also wearing a shirt that says “I’m a Pepper!” Anderson’s whimsy couldn’t be more forced if he tried. And I’m sure he did, again and again.

There are several recurring jokes aboard the good ship Belafonte, including lights that short-circuit at the worst possible time, that Pele guy I spoke of earlier (who seems to be a “chorus” of sorts, like Nat King Cole in Cat Ballou), and stop motion special effects that are clearly awful on purpose; to what end I cannot fathom. Again, is Anderson commenting on the period films that attempted to educate but instead came off as silly? If so, here’s the kicker: no one on earth remembers those films anyway (nor has watched them in fifty years), so why satirize them? But that’s Anderson — what’s clever to his juvenile brain at 3 AM in his basement does not necessarily translate to wider appeal. “Remember Jacques Cousteau? Let’s do a send-up!” And while we’re at it, I hear Sid Caesar’s in need of a good ribbing these days. For satire or parody to work effectively, the audience needs to recognize the object of fun. No one does (or will), so we’re left with Anderson masturbating in the dark, as usual. 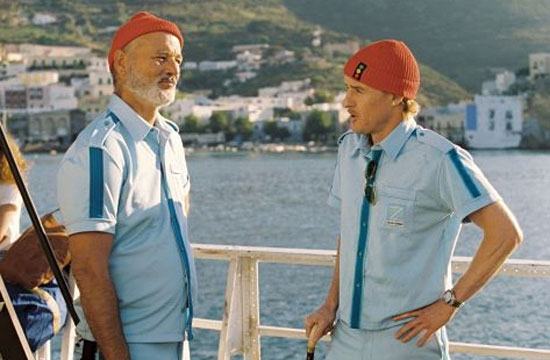 You could argue that the ship is a grand set piece, what with its winding staircases, sauna, cabins, editing suite, and laboratory, but that would imply I always go to the movies to look at the furniture. Here again, as Steve gives Ned a tour, it is clear that the boat is fake and little more than a cutaway. Yes, my dear students, is it not brilliant? As if such things were self-explanatory and I a thick-skulled philistine for missing the point. Cleverness (although I would not label Anderson’s film as such) should be to some end, otherwise the force behind it has no business being labeled a filmmaker. Cinematic artists must have vision and insight, unless of course we are willing to grant everyone the title. I’m sure a toothless yokel with the runs could shit forth something “creative,” but would that pile of poo advance the cause of humanity? Again, I don’t mean that an artist must aspire to be another Stanley Kramer (a good director, but too often buried by his overwrought “good intentions”), but it’s not enough to merely “do.” Entertainment for its own sake is acceptable (and often better than do-gooder bullshit), but The Life Aquatic manages to fail even with that limited goal in mind. Instead, it’s insufferable and a cure for insomnia, a coupling that ensures no one comes out ahead. Except Anderson and the cast, of course, who at least secured paychecks for their extended vacation.

By the way, Steve and his crew (absent Ned, who dies after his helicopter crashes), finally locate the famed shark, which is some glow-in-the-dark thing that might be the silliest, least plausible creature not in a Disney cartoon. But Mr. Zissou, overcome with emotion, decides to spare the beast, which I guess means something to someone. I even heard some artsy chick discussing the finer points of the conclusion as we exited, and for one of the few times in my life, I knew what it was like to be Alvy Singer in that movie line with Annie Hall. Fortunately, and much to my silent pleasure, her male companion challenged her at every turn, and simply could not accept that such silliness had any deeper meaning. As I left their vicinity, I managed to break a smile, not for what I had just endured, of course, but instead for my hope that his voice will inspire others to reject this Wes — this kid — a rare bird who manages to get worse as he goes along.