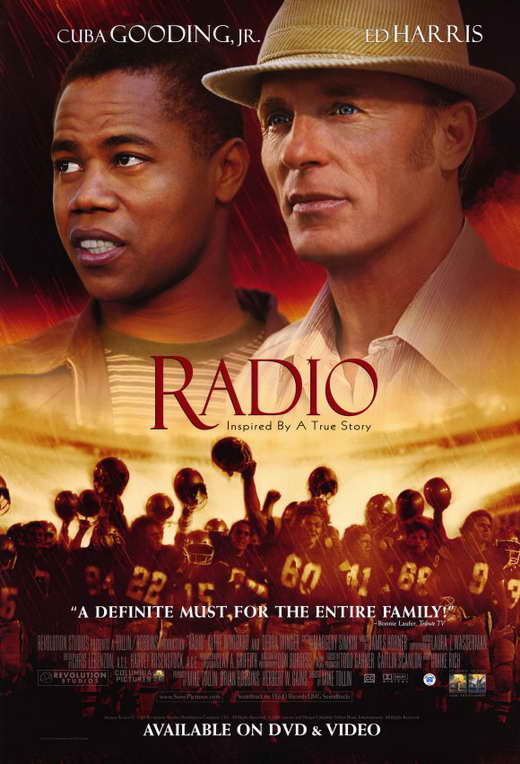 Only unlikely story of a retard who saves the world.

Yes indeedie, dear readers, we are once again being asked to accept a retard as a substitute for Jesus Christ; a bumbling, illiterate, brain damaged man as a symbol for all that is good, righteous, and noble about the human spirit. In the words of Coach Jones (Ed Harris) late in the film, “Radio’s the one who’s been teaching us.” And what would that be, exactly? Fine, he evolves from pushing a shopping cart through the streets to folding towels and slapping football players on the ass while screaming like a wounded hyena, but can it really be said that he gave these people anything? Outside of the obvious shots I could take at Cuba Gooding’s nauseating performance, or Ed Harris whoring for yet another Oscar nomination, or Debra Winger coming out of hiding to appear in this shit, or the recycling of small-town cliches thought to be long buried, I simply didn’t understand why this film had to be made.

I’m sure the director will tell you that it’s based on the true story of James Robert Kennedy, so why not inspire the youngsters? They’d insist that any story promoting a triumph over the odds is worthwhile, and that our cynical, sex-obsessed culture could use a bit of sunshine now and again, especially a heartwarming tale of love, devotion, and tolerance. If it were just that, I might give it a pass (unlikely, but it’s possible). Instead, this is propaganda of the worst kind — it reaches for your heartstrings, dares you to be critical, and all but says that anyone who doesn’t want to give Radio a big, sloppy hug is a nasty, vile human being worthy of exile. 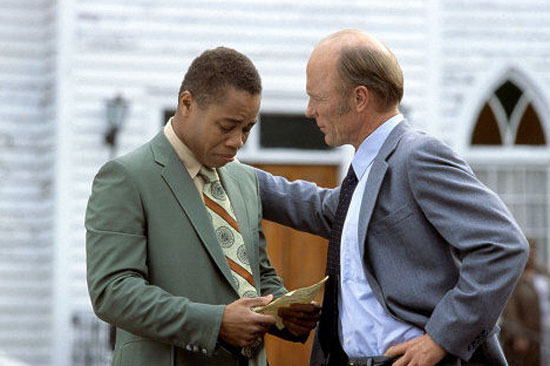 The story begins in South Carolina, circa 1976, and we first meet Radio as he pushes his trusty cart on the railroad tracks. He is quiet and shy, yet always stops by the football practice field on his way home. One day Coach Jones notices the lad and brings him some water. He also comes to Radio’s rescue after a group of players tie him up in the equipment shed (it sounds funny, but sadly it wasn’t). It is here that we see the first of at least 97 tired, overworked cliches. Yes, Coach Jones is intimidating, gruff, and forceful, but deep down he has a heart of gold. Within seconds, we also learn a second clich? about his character; that he is so in love with football that he neglects his family.

We are marched through no less than five scenes where Coach’s daughter cries in frustration, his wife asks him to pay more attention to his home life, and he sits alone contemplating his decisions. I’m spoiling nothing by saying that by the end, he quits his job as coach so that he can be a proper father. Never mind that I’d rather be with a large group of sweaty high school goons than his dull as fuck family. Coach may do little more than talk about football, but his daughter does nothing more than make our ears bleed with her insipid cheerleading stories.

Radio becomes the team mascot of sorts, providing inspiration, holding up tackling dummies, and acting as the holder for field goals. The first crisis occurs when the team has to take a bus for an away game, and the school’s principal refuses to allow Radio to go along. Before we know it, the principal is fighting with Coach Jones, the Coach is fighting with parents, and all are dealing with the school board — all over fucking Radio. We know who the evil ones are from the outset, because they have the audacity to question the wisdom of allowing a retard — who is not even a student, mind you, just some stranger walking the streets — to ride along on a school-owned bus, where the possibility of lawsuits are endless.

But those who want to protect the interests of the school are horrible, hateful assholes, and people like Coach Jones — a man who sees nothing wrong with Radio wandering the school halls unsupervised — are deemed heroic. If Coach’s vision prevailed in every school in every community across the country, every waking second of the day would be devoted to watching what the retards are doing. Sounds like a recipe for a quality education, Coach. But all Coach cares about is what he thinks about Radio, and as usual, the selfish, childish needs of these half-wits make life miserable for everyone else. Hell, when Coach generously takes the ‘tard to lunch everyday, he can’t help but order two helpings of pie. Whatever you want, Radio! It’s all about you. It always is. 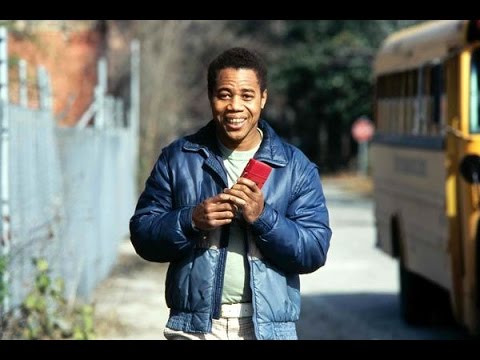 The story is always on auto-pilot, so giving you the highlights is a snap. Bullies pick on Radio only to be punished, which then leads to the big “change of heart” scenes. This occurs no less than three times. Radio also gets the game ball after the last game, apparently for not running out on the field naked and masturbating on the 50-yard-line. Radio is called a “distraction” by one of the school’s biggest boosters, who later appears in the big finale where the Coach resigns in protest. There are several scenes in the local barbershop, where all of the customers are gossiping old men who only seem to care about high school football. At least one of such men, per custom, is wearing an article of clothing indicating his status as a veteran. Radio is arrested by a rookie cop who doesn’t seem to be aware of the policy that allows screeching retards to roam the streets with shopping carts full of expensive merchandise. But wouldn’t you know it, Radio is handing out Christmas presents to his neighbors. Radio’s mother dies of a heart attack, which brings about another crisis. Will he have to be institutionalized? Will Coach take him in? Interestingly enough, this issue is never resolved, as we never learn where he lives after his mother’s death, although I’m assuming wherever it is, South Carolina taxpayers are paying for it.

We’re also shown how cute Radio is in a series of sentimental clips. There’s Radio reading out the lunch menu over the PA system! I’ll be damned if I know what in the fuck he said. There’s Radio shooting a free throw……and making it! There’s Radio hugging every living soul in sight. And then there’s the comic highlight where Radio calls the Coach and asks him what pants he should wear to a Christmas event. He holds up a pair to the receiver and yells, “How ’bout these?” Radio even makes a peace offering with the prick that played a prank on him by sending him into the girl’s locker room. There, on a bench near the boy’s locker, is a small radio and a piece of paper covered with chicken scratch. But shucks, we know it says “Radio” because the scene before had Ed Harris tutoring the numbskull in the finer points of reading and writing. He’d have better luck with a houseplant. Instead of roaring with laughter, crumpling up the paper, and cursing Radio under his breath, the bully walks over to him and pats him on the back. Oh that Radio — he can change lives!

Fortunately (and surprisingly), there is no “big game” where Radio suits up to replace the star quarterback who has twisted his knee, but I imagine someone at the initial story conference tried his damndest. “Remember that Rudy flick? Ours is sorta like that, only our guy is black and retarded, not Irish and gay.” However, there was a graduation scene, where Radio is handed a diploma for, uh, I guess staying the fuck out of the way while the normal kids learned a thing or two. I mean really, must we reward someone for being exactly the same at the end of the year as he was at the beginning? Maybe so, since Southern schools pretty much adopted that as official policy decades ago. At any rate, I’m exhausted after this film, and I might not be as fired up as I expected to be. Radio is a typical retard — selfish, rude, annoying, and excruciatingly intolerable — but I simply didn’t care enough to hate him with all of my fury.

Yes, nothing could have been more satisfying than to watch him beaten savagely in the streets by local toughs, or kidnapped by school board members and sent to an underground sterilization clinic, or brutally raped by the football team while an inebriated Coach Jones shouted obscenities mere inches from the boy’s face. I wanted him to die for his crimes at every conceivable opportunity, but in its own twisted way, that would make him even more of a martyr. Enough people are paying attention to him and making him feel special; I’d rather we ignore him completely. Radio’s mom may say that “He’s the same as everybody else, just a little slower than most,” but we don’t have to believe it. Until someone figures out something new and interesting to do with retards, future Radios need to be suffocated at the development stage. Please, for all of us.