The fantastically-appropriately titled Lessons of Darkness
is without question Herzog’s darkest hour. Does a less joyful piece of
art exist? Works on the Holocaust spring to mind, but they can be
dismissed for this film chronicles not simply man’s inhumanity to man,
but man’s hostility towards the very universe he lives in. A primordial
anger, an ancient rage if you will, is morbidly captured on film and
narrated by the Book of Revelations, accounts of the last days of
Atlantis, Verdi, Schubert, Wagner and Mahler (among others). So bleak
and total is the devastation that viewer is left jarred to his/her
core, unsure of the point of anything. Friends, we are brutal monsters
and we are reshaping the earth in our own image. Humanity, love,
dignity? Forget them entirely. Death, desolation, lifelessness and most
essentially horror rule the day. We are living, and apparently
striving, for the deep bottom of a very dark sea. Honestly, only out
and out nihilists and solipsists could watch Lessons of Darkness and not feel the bottoms drop from their stomachs.

Before we can discuss the specific “plot” of the film, words
must be spoken about Herzog’s documentaries. They are fiction. Yet, as
Herzog maintains (and I mostly agree with), larger truths can be
achieved this way then by simply turning on a camera and shooting. For
then, you are just capturing the “truth of accountants,” not the
ecstatic truth that Herzog is concerned with; obsessed with. By
taking his documentaries out of the confines of the specific and the
actual, Herzog is able to magnify their scope to much grander
proportions. Sometimes, “regular” documentaries are able to accomplish
this. The great Spellbound
instantly leaps to mind, for it actually has something to say about the
human condition rather than just being a document, a pause in time.
Moreover, Herzog repeatedly states that he is much more keen to make a
film using his “knees and thighs” rather then his head. His guts as opposed to his mind.
Remember, we are talking about a man who when asked what his ideal film
school would be like, stated that it would only contain a boxing ring.
As a result, his documentaries function on a much more emotional level
than the norm, which are for the most part just a recounting of facts;
a legal proceeding. His are operas, demanding emotional responses from
the viewer, though never in a clever or manipulative way. 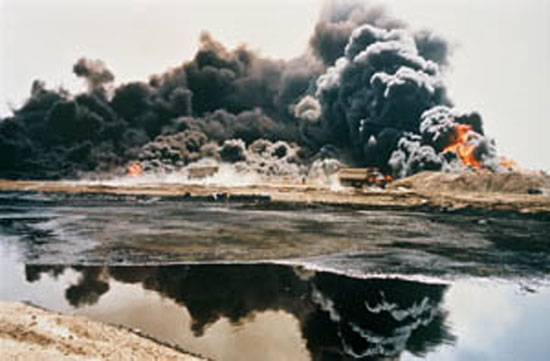 The rightful heir to the mesmerizing Fata Morgana, Lessons of Darkness
is that film turned on its head. Filmed in essentially the same
manner–swooping helicopter shots depicting the earth as an alien
landscape, strange peoples shown without explanation, epic narration
and a sweeping score–Lessons of Darkness makes the earlier film
look like what it is; a happy go lucky romp through strange lands.
Filmed in Kuwait during the aftermath of the first Gulf War entirely in
Kuwait (the tragedy of a second Gulf War will not be lost on anyone
viewing Lessons), we are shown a burned land where fires rage
out of control, water has been replaced with black, lifeless oil and
human misery is both manifest and paramount. Take your pick of the
heinous shit; we meet two women. The first has lost the ability to
speak because she was forced to watch soldiers torture both of her
grown sons to death. The second tells of how her son dripped black ooze
out of every hole in his head. Then a solider crushed that same head
with a boot and now he’s lost the ability, or rather the will,
to speak. And again, it is never explained who these women are or who
the aggressors are. Rather, they are just victims of the horror. The
only other humans we are shown are American firefighters, very much
appearing to be extraterrestrials. The firefighters construct these
intensely intricate sculptures that seem to be intended to extinguish
the fires. However, we watch with mixed terror and delight as these
same men restart the fires by hurling balls of flame into geysers of
oil, for as Herzog explains, they (and by implication us) simply cannot live in a world without it.

I have covered this ground before (and so has Herzog) but one
aspect of cinema that has fascinated and mesmerized me since I could
open my eyes is movies’ ability to transport us to another world.
Herzog calls it the search for adequate images. And while I am on board
with his philosophical maxim, I believe I enjoy the journey more so
than the result. Because I believe, unlike Herzog, that society has a
lack of adequate imagery because we are so flawed as a species. Fuck it man, just entertain me; blow me away. The first two (“real” as my mother would say) Star Wars
films excelled in this regard. The desert planet of Tattooine, the ice
world of Hoth and the serenity of Cloud City were all so beautifully
other-worldly, so foreign, so actually alien, that to this day they
stand out in my mind as true artistic achievements. Smoke and mirrors,
sure, but a young George Lucas was able to take a part of my world
and make it so impossibly unearthly that it simply had to be elsewhere.
Feel free to contrast these with the digital-diarrhea of Lucas’s more
recent efforts; inadequate imagery, indeed. Quite comparatively Lessons of Darkness (and by association Fata Morgana) simply are not of our world. They exist somewhere else entirely. 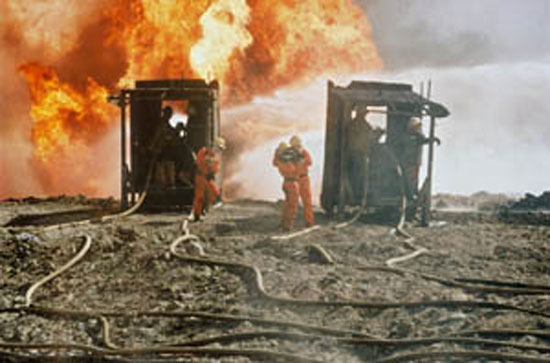 The brilliance of Herzog (as opposed to the self-serving megalomania of Lucas) lies in the fact that he is not documenting. He is creating.
In this case, he shows us not Kuwait, but the results of a world
addicted to oil and war and war for oil. It is our own demise, and the
mad fucker captured it on film! For we are not able to simply watch Lessons of Darkness and say, “yep, the Gulf War sucked,” no. Rather we are forced, quite masterfully, into acknowledging that we suck. Furthermore, all
war sucks. It robs us of our dignity, our grace, and our very humanity.
Folks, there are countless billions of planets floating around in the
dead vacuum of space that are without light, filled with fire and
beyond hope. We’re just queuing up for our tickets to the end of all
things. And perhaps there is nothing wrong with that? Perhaps a race of
creatures as vile, petty and shortsighted as we are deserve such a fate? All evidence seems to sadly indicate so, for what else could be the lessons of darkness?

1. By dint of declaration the so-called Cinema Verité is devoid of
verité. It reaches a merely superficial truth, the truth of
accountants.

2. One well-known representative of Cinema Verité declared
publicly that truth can be easily found by taking a camera and trying
to be honest. He resembles the night watchman at the Supreme Court who
resents the amount of written law and legal procedures. “For me,” he
says, “there should be only one single law: the bad guys should go to
jail.”
Unfortunately, he is part right, for most of the many, much of the
time.

3. Cinema Verité confounds fact and truth, and thus plows only
stones. And yet, facts sometimes have a strange and bizarre power that
makes their inherent truth seem unbelievable.

5. There are deeper strata of truth in cinema, and there is such
a thing as poetic, ecstatic truth. It is mysterious and elusive, and
can be reached only through fabrication and imagination and
stylization.

7. Tourism is sin, and travel on foot virtue.

8. Each year at springtime scores of people on snowmobiles crash
through the melting ice on the lakes of Minnesota and drown. Pressure
is mounting on the new governor to pass a protective law. He, the
former wrestler and bodyguard, has the only sage answer to this: “You
can´t legislate stupidity.”

9. The gauntlet is hereby thrown down.

10. The moon is dull. Mother Nature doesn´t call, doesn´t speak
to you, although a glacier eventually farts. And don´t you listen to
the Song of Life.

11. We ought to be grateful that the Universe out there knows no smile.

12. Life in the oceans must be sheer hell. A vast, merciless
hell of permanent and immediate danger. So much of a hell that during
evolution some species – including man – crawled, fled onto some small
continents of solid land, where the Lessons of Darkness continue.