And So Began Julia Roberts’s Reign of Terror!

Admittedly I saw Pretty Woman when it first came out in theaters back in 1990, forgot all about it, then watched about an hour’s worth on HBO the other night before I had to shut it off. This movie is mendacious! What utter, horrible horsecrap! I don’t even know where to start. We all know the premise. Hooker with a heart of gold meets heartless businessman and together they conquer all the odds, stereotypes, yaddy yaddy bullshit. Please allow me to tell you that every single minute of the film, every single fucking frame, did nothing but scream, LIES! LIES! LIES!.

OK look, first of all, if a hooker did exist in Los Angeles that looked as good as Julia Roberts looked in Pretty Woman, she wouldn’t be a fucking hooker! Yes, she had a horse-face back then, but lets be honest here; Queen Julia looked pretty hot. Moving on, having not only grown up around Los Angeles and lived in the thick of
things east of Hollywood for the last four years, I can assure you THERE ARE NO HOOKERS, NONE, WALKING THE STREETS OF LOS ANGELES THAT LOOK ANYTHING LIKE THAT.

The hooker that used to hang out across from the Burrito King by my old place on the corner of Sunset and Alvarado weighed two hundred and fifty pounds if she weighed an ounce. She was in her late thirties. I only said that cause I’m being nice. I’m sure she was a grandmother. Her preferred method for trying to sell her wares involved lifting her skirt up to her distended tits and calling me and my roommate faggots (“Hola pinche mericons…”). In short, this lady would have done my entire household for bus fair. 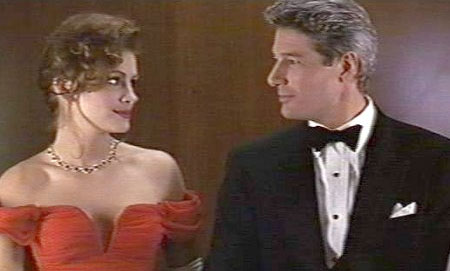 In Pretty Woman, Roberts and her goofy little roommate live in an apartment. They are allowed to hang out in bars and behave like jackasses. Life looks fairly decent. During the first fifteen minutes of the film, prostitution is made to look like a shitty job girls might take between semesters at the junior college. Beats working at the mall, right? Absent from this laughable portrayal of whoredom were the alley whippings, the rapes, the police busts, the rapes perpetrated in the back of squad cars by the police, the frequent abortions, the venereal disease, the track marks, the terror, the fact that 100% of all hookers (in this country) have been sexually molested and abused to the point where they can’t even sort of fit into society anymore, let alone quickly ascend to the top of the social ladder if only given the chance. Like I said a few paragraphs up, LIES! All of it. And really good-looking women who fit the profile I just described become porn stars. Or high-price hookers. Either way, they are not peddling their respective asses on the touristy part of Hollywood Blvd for chump change. In fact, in this lame, lame
film, Roberts’ character is going to charge Gere the grand total of $100 for her services, which is ludicrous. Last time I checked–don’t read this honey–hand jobs started at about $250. Hand jobs.

One particularly galling scene goes down like this. Roberts has just blown Gere. Now, granted, in a movie about a man and a hooker we are shown NO SEX AT ALL. Got it? Just implied sex, OK? Good. So, Roberts is in the bathroom doing something and Gere bursts in catching her off guard. Julia’s hand goes behind her back. She’s
concealing something. Gere grabs for it and begins telling her that he won’t have anything to do with drugs. Good thinking on his part, because you show me a clean and sober hooker in LA and I’ll show you a fucking fairy tale. Turns out though, that it wasn’t drugs she’s concealing, it was DENTAL FLOSS. Get it? Julia Roberts’s hooker
character is just a nice, down to earth girl who has lost her way in the big city. Like the Bush twins. If she only had a prince charming–specifically a multi-millionaire prince charming–to set her straight, why then she could be living out the American Dream in suburbia and popping out a Range Rover worth of screaming brats named
Dakota, Tucker, Cheyenne and Dallas in no time! I wish all of you could have heard the string of profanities that left my mouth when I found out she was hiding floss. Hookers floss with pubic hair and use semen for mouthwash. Or Jim Beam. Hello? Anyone? Earth? 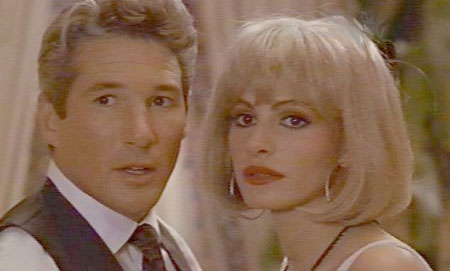 OK, so maybe along with the assortment of condoms she conceals in her boots, maybe Whorella does keep a secret stash of floss. Fine. But what fucking guy is going to actually think that the hooker he just picked up off the street is going to be in favor of the war on drugs? Come fucking on! What a load of bullshit. “Listen miss hooker, you can suck my cock for cash as long as said money goes towards Wonder Bread and Diet Pepsi. You buy
a joint and I’ll do something…um, I’ll be all mad and shit. Just say no. Do you swallow?” Who writes this fucking crap? Oh yeah, the same asshole who wrote Under Siege, Under Siege II, the upcoming Under Siege III (which admittedly does sound good–Segal on an Israeli flight hijacked by Muslim terrorists) and Pam Anderson’s V.I.P.
TV show. Again, Gere’s character is supposed to be some sort of jaded, ber-corporate rich super-fuck who destroys lives for a living in Reagan’s 80s, yet he’s against cocaine? Please, the world ran on coke back in the
80s. Why do you think we couldn’t stay out of Latin America? The bananas? Also, the implication that sticking cocaine up your nose is somehow morally lower than fucking strangers for money, well, it is just retarded. On every single level. Exactly like Pretty Woman. Though I shut it off after about fifty minutes, I pray that Roberts and Gere get murdered by Muslim terrorists. Maybe in part II.