Home / Reviews / Movies / A PRAYER FOR THE DYING

A PRAYER FOR THE DYING

Based on the Novel by Jack Higgins

Jonny is scared of the Irish…

Watching this movie you just start to trip out on Mickey Rourke. What on earth happened? First of all, could his face has changed that much in sixteen years? Again, what happened? Not that I think his talents have diminished or anything like that, but this guy was on top of it all. Nowadays… I remember watching an episode of HBO’s really bad Project Green Light and the incredibly lame directors were told by the equally lame casting guy that basically serious Hollywood folk don’t work with Mickey Rourke. And they wanted him to play a busted-up, down on his luck, alcoholic dad. It was all moot because Mickey never would have appeared in the saccharine pile of crap Project Green Light pooped out. But as I was saying, Mickey, baby, you could have had it all…

A Prayer For The Dying features what might very well be the most effective opening scene in all of cinema. Practically nothing is said, yet as the viewer you know exactly what is happening. It perfectly sets up the rest of the film. What happens? A ragged band of IRA punks in Northern Ireland have a bomb rigged to go off when some British Army jeeps drive by on patrol. Unexpectedly, and unfortunately, a school bus carrying about a dozen 10-year-old girls passes the army vehicles. Kaboom. Both Rourke and his best friend Docherty (Liam Neeson) are disgusted by their misstep.

Rourke’s character, Martin Fallon, flees to London where he is forced to commit a murder in order to get himself a passport and some cash and get the fuck out of dodge. The British want him as a terrorist, the IRA as a traitor. One last killing seems like a good idea, given the circumstances. Only trouble is, as he is committing the final act, a priest (Bob Hoskins) witnesses everything. Trust me, it all makes sense, as the hit is going down in a church cemetery. Fallon and Father Da Costa form an interesting relationship. Fallon wants nothing else to reform but he is a bit too worldly for God, while Da Costa, who himself had something of an unsavory past, wants nothing more than to save Fallon’s soul.

The high point of the film for me was the performance turned in by Alan Bates as Jack Meehan, a treacherous crime boss and funeral home owner. He of course uses his crematory for no good ends, that part is obvious. What isn’t obvious is how nuanced a character Bates gives us. Meehan is cruel to a fault, yet sophisticated, gentile almost. He is eccentric without being ridiculous. Very much like the performance Ian McShane turned in as Teddy Bass in the great Sexy Beast. Though, as bad as Bates plays Meehan, Teddy is a bit more evil. Regardless, Bates alone makes the movie worth watching. 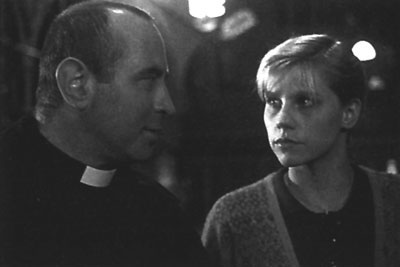 Everyone else is pretty damn fine, too. I mentioned Rourke already and he does do a wonderful job. Even his accent is pretty good. He could have been the next De Niro. Bob Hoskins is really good as a priest with a little bit of anger management issue. Even Neeson is pretty OK in a rare role as a baddie. Also, Bates surrounds himself with some marvelous tough guys. Real scum who look scary, not like a bunch of pussy actors. Look for the bald guy who shivs another guy’s hands to a wall. The female lead is the blind niece of Father Da Costa who of course falls in love with bad boy Rourke. While it is an odd love story, it is believable. The actress, Sammi Davis, does a convincing job.

A Prayer For The Dying is a good, solid, thinking man’s action flick, especially compared to the garbage Hollywood was pouring out back in 1987. Sure, metaphysical questions are tackled, but bombs still manage to blow up, guns find a way to get fired and boobs are squeezed. Rourke is excellent, and you see now why people are so upset by his fall from grace. His street cred is still high. If you want a fucked up hard-ass in your film, you look for Mickey. Also, his once dreamy looks, while very much present and in full force in this film, have given way to a harder, almost damaged exterior. Here, Rourke is in his prime. This one was made after Rumble Fish but before Wild Orchid. Rourke will still from time to time turn in a good performance (The Pledge, Buffalo 66), more often than not, however, you will find him being the only redeeming quality in otherwise horrid tripe (Spun, Once Upon A Time In Mexico). Overwrought ending aside, A Prayer For The Dying might be his best work. (I’m kidding, we all know it’s Barfly.)