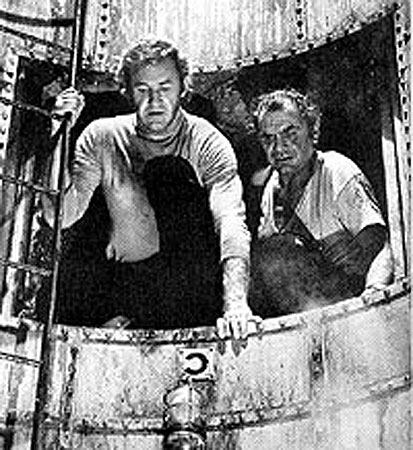 Written for the screen by Wendell Mayes and Stirling Silliphant

Lets face it: one of the cinemas greatest pleasures is that it affords us the opportunity to watch people die. And such methods! We can see the nasty and the wise, as well as the beautiful and the damned, meet their end via the knife, the gun, the well-timed missile, or even the fiery explosion. Instant death rarely suffices, as we love to bear witness to pain, suffering, and lingering misery. Numerous genres help us achieve that unique form of erection that comes from the final snuffing of lifes candle, but only the disaster picture–that distinct product of post-Watergate cynicism and despair–exists solely to that end. We couldnt possibly care about these bell-bottomed ciphers, after all, so not why not stare intently at the shooting gallery that is natures grand design? Sure, nature, so-called, is indifferent to our plight, but with these big-budget extravaganzas, we are able to imagine that there is a conspiracy of sorts; an effort to eliminate the worst of us, which really amounts to the whole of human existence. Arrogance and hubris will always get you killed, but theres nothing to save you even if youre just passing through.

The Poseidon Adventure, the one disaster film that actually warrants (if not commands) repeat viewings, refrains from the usual judgment of the era (think The Towering Inferno, which is little more than a three-hour lecture denouncing deregulation), but it does, through Gene Hackmans world-weary priest, ridicule the idea that God can be counted on during times of trouble. Think of the final scenes where Hackman literally hangs in the balance: his screams are not fear-based, but instead, accusatory. Why, God, do you kill us, especially when were at our most vulnerable? Why do you demand blood at every turn? Moreover, why the fuck are you such a fucking cocksucker? Hackman, as well as the film, believes strongly in a supreme being, but he (and it) asks that we instead look to ourselves for comfort and security. And its telling that working together holds little promise. After all, only a few survive in the end, and were forced to watch good people die ridiculously when we would expect them to be saved. That said, it makes sense that Linda, the sassy ex-prostitute rescued by Ernest Borgnines gruff cop, dies only moments before the conclusion. There really wasnt any reason for the film to kill her, other than the fact that dolled-up whores are no good and shouldnt be allowed to live, so long as fat Jewish ladies must have their hearts explode within their chests. But it stands to reason–the happy hooker wears her high heels throughout the entire adventure, be it inside air shafts, through walls of flame, up steep ladders, or across narrow halls. Vanity, thy name is Linda. And you had it coming. 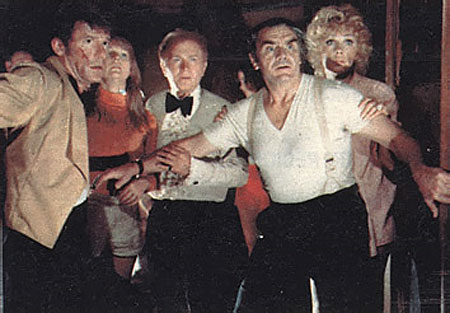 It causes me no embarrassment to say that Ive seen this movie at least a dozen times, and that if I caught it on cable this very evening, Id watch it again. Im not really sure why its so damned watchable, but Im sure it has something to do with Hackmans rugged, sweaty masculinity. Or perhaps its the idea that Lt. Frank Drebin is the ships captain. Or maybe Im inspired by the young girls question to Red Buttons as she strokes her dead brother: Did you like his music? And that the expired drummer is a dead ringer for Harry Shearers Derek Smalls. I even love Shelley Winters, the poor gal; perhaps more so after she cries, In the water Im a very skinny lady! Well, no, but you do hold her breath for what seems like twenty minutes. I even like the Oscar nominated song The Morning After, which, of course, never comes for 99% of the cast and crew. We even get Roddy McDowall falling off a ladder and being burned alive by scalding hot water.

And while it lacks the austere presence of George Kennedy–the eras patron saint of cigar-chomping absurdity (and grand champion in the sack, if youve seen Concorde: Airport ’79)–The Poseidon Adventure is just silly enough, and just serious enough, to send it ahead of the pack. And again, we dont feel bad about wanting to see Hackman sans turtleneck, as theres nothing remotely gay about lusting for Man at his biggest, baddest best. Or maybe there is; but Im unconcerned. Its important to note that Borgnine is ostensibly the films portrait of blue-collar manhood, and yet hes a vile cartoon. Perhaps he tries too hard. And just when we think Mr. Buttons is the films milquetoast extraordinaire, he smacks Borgnine around with an applause-worthy verbal assault, made better by the fact that Ernies wife had just expired seconds before. But thats the beauty of the disaster film; emotions reign just long enough to be manipulative, phony, and counterproductive. Better yet, they disarm us so the next body may fall. Just like that tuxedoed creep through the skylight.