Friends, hear me now: Peter Jackson has created the single loudest movie in the history of the world. King Kong, the latest and biggest from King Hobbit himself is deafening. Nearly three hours of screams, shouts, bellows, grunts, roars, rock slides, dinosaur stampedes, gunfire and car crashes. Actually, lots of just plain old crashes, too. Shit got banged around big time in this sucker. Kong just sitting still and breathing was thumping. While the original Kong was a “talkie,” it had a sereneness to it that is simply undeniable. Check out the stop motion sequences. Not so here. To make sure that the audience was aware just how modern this update is, Jackson makes you feel as if you had your head stuck in a jet engine… for 180 minutes! Seriously, I’m fucking deaf and deeply fatigued. What a cacophony.

As far as the movie itself goes, it was bloated. Heavy on everything. Four courses plus dessert — all soaked in pappy butter. Sure, the sets were grand and of a larger scale than anything I’ve ever witnessed, surpassing Jackson’s own epic Rings creations. Of course there were more dinosaurs and other creepy beasts than all three Jurassic Parks put together. But it was just so much. If this film were sugar, you would leave the theater with diabetes. There’s this one part where the rescue party going after Fay Ray Watts gets dumped by Kong to the bottom of a ravine. And then bugs come after them. But not just normal bugs. Or twenty bugs. Approximately nine-hundred and seventy trillion billion bugs the size of four-year-olds (and bigger) attack the heroes. Most interesting to me, is that even though bugs are really dumb and are only after protein/a soft, wet place to lay their eggs, they don’t attack each other — only the humans. Thankfully, there are these really weird tube-worm mud-cocks with lots of teeth that devour this one dude. That was pretty good. But then Adrian Brody is being engulfed by a dozen giant wasps and this really dumb kid uses a Tommy gun to blast them off. And really, that’s the new King Kong — one good scene followed by one dumb scene. And, more often than not, the dumb scenes involve the chronic overuse of computer generated insanity. Or Jack Black. 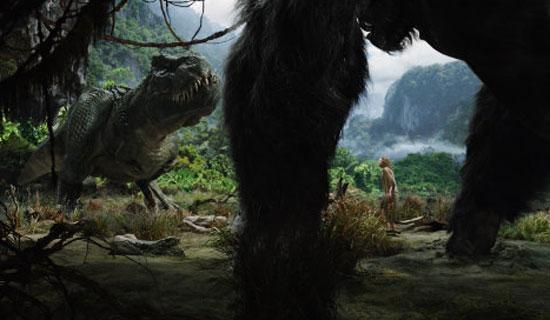 Jack “Not Ready For Prime Time” Black stars as Carl Denham, a film producer/director who can’t figure out if he is a Herzog-style artist interested in seeking out “adequate imagery,” or if he is a baby-faced PT Barnum with no interests besides a quick buck. Through a series of contrivances (this film was fat with contrivances) he scams an entire film and boat crew into taking him to the long lost Skull Island so he can film his masterpiece. In front of a porno theater he meets Ann Darrow (the exquisitely ravishing Naomi Watts), a recently out of work actress, and convinces her that fame and fortune are right around the corner if she’ll just star in his film. She of course wants no part of it until she learns that Jack Driscoll (funny-nosed Brody) — a playwright whom she very much admires — is writing the script. She agrees and they all get on The Venture and steam off in search of undiscovered lands. The film mucks about at this point, as the three-hour cruise feels like it took a full three hours. And there are no giant apes or anything. Just a bunch of silly caricatures talking about all the bad things that are going to happen to them all once they reach the island. All I could think about was Millhouse’s all-too-pertinent plea during the Poochie episode, “When are they going to get to the fireworks factory?!” In fairness to Jackson, the boat itself was very cool looking and the sequences where the boat gets caught in the rocks was nice to look at it. Noisy, but nice. 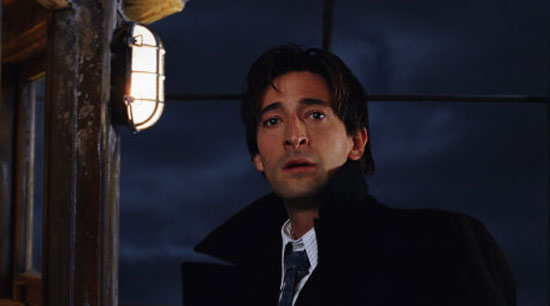 And then for the briefest of moments, after lots of fits and starts, the film seems to start rolling. Carl takes his film crew ashore and they encounter this new ethnic group of off-green skinned people that Jackson made up. They are total savages and they kill a few of the non-essential characters. Right when they are going to kill Carl, the Venture’s captain (Thomas Kretschmann) shows up with his mighty German boom stick and the foreigners all head back to the ship. Only those darn savages, who are conveinently in full religious ferver/freakout mode, sneak onto the boat (by pole vaulting, no less) and steal Ann so they can sacrifice her to that darn ape. The crews, now heavily armed with the aforementioned Tommy guns, jump back in their rowboats and SCREECH!. The movie kicks it down a couple gears. Yeah, ostensibly, this is where it should get much more exciting because we meet Kong and all the other seventeen billion creatures that live on Skull Island. Instead though, the two crews just skulk around for a bit looking at footprints until they get caught up in a stampede of dinosaurs. The running of the brontosauri was goofy and messy and frankly was little more than showing off. Cause it wasn’t just, “how about a fifty ton lizard chase ’em?” No, istead it was give me a dozen of the big fuckers and, “Ooh! Everyone dug the ‘raptors in the OG Jurassic P. Give me half-a-dozen of them. Oh, and if Adrian Brody can not only outrun them, but kick and punch them too, well, that would be good.” And, similar to when Will Smith punched out the alien in Independence Day, I sat there gaped-mouthed as Brody did exactly that. To the point; dinosaur stampede that serves only to one up Spielberg? Lame. 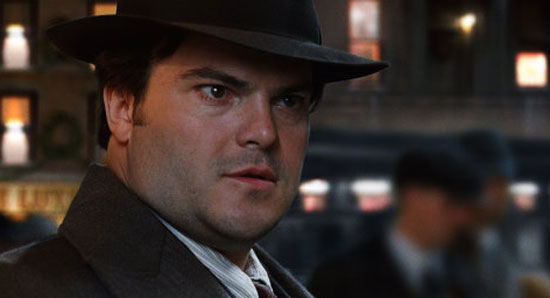 But then, as soon as that nonsense is complete, we get treated to a truly memorable sequence; King Kong battling and defeating not one, not two, but three Tyrannosaurus Rexes. All the while keeping a tight grip on Watts. Totally and utterly breath-taking, not to mention exhilarating. I’ll posit this because I am tired and my eardrums are sore — if the entirety of the film had just been Kong and Watts it would have been a masterpiece. Everything else that takes place is simply fat and in dire need of trimming. At root, Kong is nothing more or less than just a Hollywood-by-numbers mega-spectacle. Jack Black falls flat and poor Brody, who by all accounts is a fine actor, is left to flounder about and essentially look sad and perplexed. His character simply goes nowhere. The rest of the cast is largely forgettable. We knew from LOTR that the effects would be beyond belief. However, some of them, especially towards the end, are more reminiscent of Michael Bay than anything else. Still, the ape and the blond, despite the rather latent anti-miscegenation message, are pretty great. Darrow is a vaudeville actress and to appease the beast she is more often than not juggling rocks or doing back flips onto her face; all to the great amusement of Kong. The very best scene in the film takes place towards the end when the odd couple gets some much needed and deserved moments of silence and slide around on an ice rink in Central Park. I could have watched that all night. Of course, their peace is interrupted by the army launching artillery at them. Boom Boom BOOM!!! In the final summary, King Kong is fine, but nothing more. Unless we are talking sheer volume; there it reins supreme.