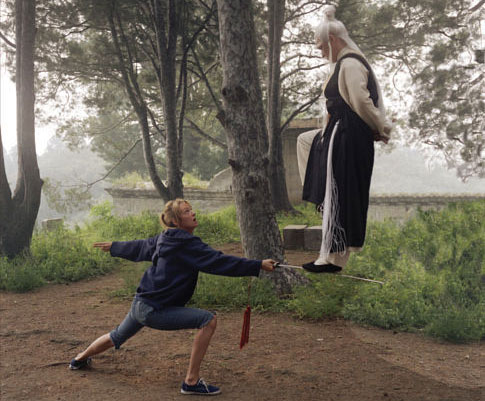 Kill Bill Vol. 2 is undeniably entertaining, energetic, cheeky, and above all, alive, but, like the first installment, still left me cold and indifferent. While Quentin Tarantino is arguably Hollywood’s greatest cinephile, I am somehow put off by his endless string of allusions, references, and blatant rip-offs from other, often superior, works. He knows his stuff and steals from the best, but there is still something unseemly about stitching together styles and characters from other films and passing the patchwork off as his own original creation. I know I made this complaint in my review of Vol. 1, but it is once again impossible for me to dismiss. There are a hundred reasons others could give for loving this film and defending it as a work of art (most of which would hold a bit of truth), but as I watched, I could think of nothing else but the obscene self-awareness of it all. Tarantino loves to throw everything in his manic mind at the audience — and there is certainly nothing wrong with that — but I’m afraid he has completely submerged any semblance of story in a style that announces its cleverness with a haughty tone. Perhaps I’m reacting to Tarantino’s healthy ego and belief that his own work is flawless, but rather than watch replays, recreations, and resurrections, I’d prefer to go to the source.

From Kung Fu to The Good, the Bad, & the Ugly, to every Chinese martial arts picture of the past thirty years, Tarantino has assembled little more than a greatest hits collection for our consumption. And he doesn’t merely allude to John Ford, for example, but provides an exact replica of the iconic John Wayne shot in The Searchers. Tarantino rightfully admires that glorious piece of filmmaking, but wouldn’t a true artist move beyond a childish game of copycat? With the proper equipment and budget I too could re-create that shot, but what would that prove? As we saw with Gus Van Sant’s soulless remake of Psycho, it’s not enough to march along to the words. We must also understand — and feel — the music. Tarantino, then, is a gifted mimic, mining his vast catalog for great shots, signature lines, and unforgettable musical selections, but in the end, they add up to nothing. Tarantino’s gestures are hollow at their core; they provide us with connections to cinematic memories most of us share (who wouldn’t be charmed by the music and freaky camerawork of those old, badly dubbed, kung fu shows, for example), but they don’t speak to us any more than a pretender to the throne. I don’t want someone who is “like” Alfred Hitchcock, I want the master himself. There will always be imitators and they shouldn’t be judged too harshly for not being as good (they never are), but let’s also not call them the second coming. I firmly believe that a more knowing public would be less tolerant of Tarantino because they would see that he isn’t as unique as they once believed. And the critics, in less underwhelming times, would hold him more accountable as it is quite easy to lead a dull, unimpressive pack in a cinematic parade. 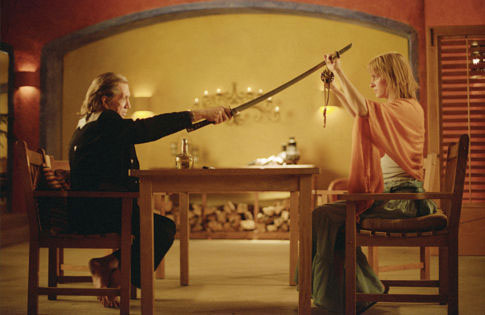 Again, the film (singly, and as part of a complete work) is a wild ride that is never boring, but I never jumped in with both feet. The violence is brilliantly staged, and the cinematography, editing, and music all add up to a wondrous package. And yet, I was curiously unmoved, for, at bottom, there is nothing at all inventive about the ancient story of revenge, betrayal, greed, and redemption. I realize at least 95% of all films deal in such stories, but they are also dismissed by the critical mass as recycled junk. Tarantino just happens to dress his junk up with a feverish passion that too many are unwilling to risk. Maybe I want Tarantino to broaden his horizons and at least attempt a film that moves beyond pop culture obsessions, but that is in no way to suggest that any filmmaker is obligated to reach for “meaning.” Tarantino inhabits a closed, decontextualized universe — and that is his right as an artist — but after four films that all but ignore a larger world, I begin to long for QT to pursue a bit of substance. No, I’m not arguing that his violence should have consequences, or that he has a responsibility to portray women, or blacks, or anybody with more “sensitivity,” but there are only so many derivations of the same story that he can tell. Without subtext, he is nothing more than a genre filmmaker always on the surface of things. Icons must be explained, not merely presented as a given. He loves these people and these movies, but why?

As for the film itself, Uma Thurman (as the Bride) continues her journey to find the all-powerful Bill (David Carradine) and take revenge for an attempted assassination. The Bride takes out the other assassins on her list, and we are also treated to a flashback (conducted when Bride is buried alive) of her initial training. Characters are bitten by snakes, have eyeballs removed, bloody their knuckles on coffin lids, and meet their ends with exploding hearts brought on by mythical karate moves. There’s a monologue about Superman, the reunion of mother and child, and the odes to cinema’s past (i.e. rear projection). A great deal of fun, yes, but I just didn’t care. A film simply must be more than a director showing the audience how much he knows about cinema history.

Of course, I realize that I am in the lonely minority on this one, much as I still feel when I say that The Shawshank Redemption is merely decent rather than a life-changing religious experience. I will be told to lighten up, quit overanalyzing a piece of pop entertainment, and to give it a rest. Not everything can have the depth and scope of Kurosawa, so shut the fuck up, right? But as I have stated, I didn’t hate my Kill Bill experience; far from it. Only I am uncertain as to why people are falling over themselves with praise and hero-worship. Kill Bill hasn’t changed cinema and despite the talk, has not broken any new ground. Instead, it is a spotty, yet giddy history of the medium; not bad in itself, but not really a lasting contribution to the narrative arts.