Quentin Tarantino does not make films for adults. Despite (or
because of) the extreme gore, stylized violence, and savage
bloodletting, the target audience of Tarantino’s comic book quests
remains teenage boys, preferably those for whom the idea of being in
the same room with a woman, let alone actually kissing her, is simply
too terrifying to contemplate. Check the websites, chat rooms, and
message boards — Kill Bill Vol. 1 (from now on, we’ll call the fucker Kill Bill)
has stirred the imaginations of acne-ridden pubescents like nothing
else since the last installment of Lord of the Rings left theaters.
Teenage loins are buzzing across the country as we speak, and don’t get
me started on the thunderous clap of high-fives, chair-rocking, and
vocalized promises to purchase the special edition DVD the second it
hits stores. In fact, I’m not sure I’ve seen a film more tailored to
their interests and desires in my entire life. Think about it —
ass-kicking chicks, kung-fu, stirring swordplay, cool retro music,
severed limbs, scalpings, gravity-defying leaps, at least two
references to breakfast cereal, and sex with an unconscious hottie.
Hell, it’s practically the American Teenage Male in a nutshell.

I’ll admit it: I was not looking forward to Kill Bill,
largely because I believe Tarantino is a quaint relic of the 1990s, a
time when “pure” filmmaking (which for me has always meant a conscious
and unapologetic elevation of style over depth and feeling) seemed
fresh and exciting, almost revolutionary. Pulp Fiction
did indeed alter American cinema, although not at all for the better.
Instead of liberating filmmakers from dry conventions (it indeed begat
several of its own), it inspired dozens of untalented, video store
geeks to believe that anyone could — and should — make movies. Thus, Tarantinoesque
was born, which was defined by its sly, ironic tone, endless pop
culture references (where the previously uncool became cool once
again), and romantic view of crime and violence. Brutal killers became
poetic hipsters, and it became necessary to study endless reels of old
films in order to catch all the references and allusions filmmakers
felt obligated to include. I always thought these wannabes (Tarantino
most of all) were actually ripping off other, better films rather than
imitating them out of love and respect, but many were fooled into
believing that Tarantino’s images were unique rather than exact
replicas meant to hoodwink the unknowing. Even Kill Bill, which
is obviously influenced by 1970s martial arts films, presents the
sights and sounds of Spaghetti Westerns, as if us dummies in 2003
haven’t seen them. Hell, Tarantino even rips off himself by giving us a
second helping of Uma drawing a square in the air with her finger and
an advertisement for Red Apple cigarettes. Maybe the kids won’t notice. 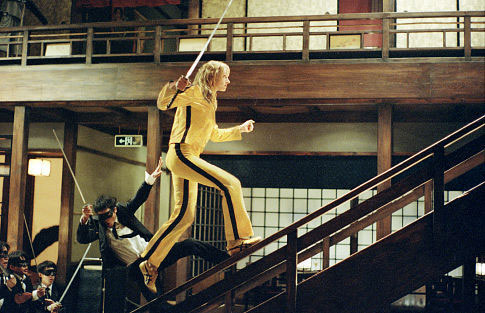 Yes indeed, the hype is real, for Kill Bill is one of the
most violent films ever made, although it is impossible to take
anything seriously as the inclusion of animation, black-and-white, and
deliberately phony sets allow the audience an out via laughter. If
you’re offended, the film is saying, you don’t get the joke. People
can’t really fly through the air, nor can one woman butcher 100 men all
by herself. And with blood spurting from necks and other assorted
wounds like a virtual tidal wave of crimson, we know that this is not
intended as a commentary or approximation of reality. Of course, I am
not offended by mindless violence, nor do I think all films with such
graphic representations of death need to be “responsible,” but I also
require at least the pretense of a story, even in the midst of
silliness. Kill Bill is not nearly that ambitious. Instead, we
get a pretext — woman is left for dead and seeks revenge — and
nothing more than the ensuing violence. It’s a louder, crazier Death Wish.
Each set piece is a ballet of murder and mayhem without anything
resembling character or plot. All of it adds up to nothing more than a
video game come to life. I realize that Tarantino never promised us
anything else, but that doesn’t mean that I should give it a shining
endorsement for honesty alone. Without the complex, time-shifting
excitement of Pulp Fiction, I was left bored and indifferent by
the monotonous rhythm of clanking swords and kicks to the face. There’s
no one to root for, no one to care about, and no one to jeer; only a
depressing, slow grind.