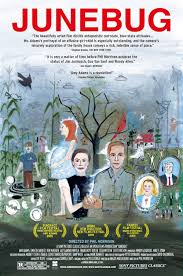 And things are only getting worse

Junebug (2005) The greatest of all crimes in American life is not rape, or murder, or even the public declaration of one’s opposition to Jesus, but rather the assumption of superiority, made that much worse when it’s actually proven time and time again. In that giant swath of red that never fails to provoke a longing for the grave during every election cycle, the hollowed eyes and stringy hair of those who single-highhandedly keep the check cashing stores in operation remind us that when politicians and pundits speak derisively of “elitism,” they are, of course, not castigating the merchants of wealth who actually ruin lives, but rather those who believe in a minimum standard for speaking and writing the native language.

Those with an education — and presumably, those who intend to use it for a purpose other than making money — are using trickery, deception, and manipulation to judge, exploit, and oppress those with more earthy appeal; those whose brains run on the fumes of their backyard stills [Ed Note: Hey!], but possess an authenticity that all the advanced degrees under heaven could not hope to secure. And that’s the culture war in America: red state nitwits surround themselves with God, prayer, family values, and just a whiff of antisemitism and racial bigotry, while blue state folks waste away their hours with art, literature, wine, childless women and conversation. Such a war has clearly been lost in the political arena (a look at how many states now officially question evolution is the only evidence one needs on this account), but whenever the world of cinema signs on to the surrender, it makes life more intolerable than usual. And so we arrive at Phil Morrison’s Junebug, a film that claims to bring the sides together in mutual understanding, but ends up endorsing the abandonment of civilization to the scoundrels.

The center of the storm is Ashley (Amy Adams), a woman who uses non-sequiturs and babbling in-coherency in ways previously untapped. When we meet her, she is in the full bloom of her pregnancy, which means that she can speak of little else, up to and including endless riffs about her weight, diet, and exercise routine. Her husband Johnny (Benjamin McKenzie) is disinterested at best, although it would be more accurate to say that he’s hostile to the idea of being a father. The parents-to-be live at their North Carolina home with Peg and Eugene, Johnny’s and George’s predictably mismatched parents. Peg is judgmental and vile (as all Southern women seem to be), while Eugene seems to have wandered in from the set of Being There, as he’s practically a double for Chauncey Gardiner, both in voice and appearance. The only difference seems to be that Eugene is even more retarded. I imagine the intent was to be the “strong and silent type,” but this man takes measured steps, seems perpetually glassy-eyed, and spends more time searching for a screwdriver than with his family. 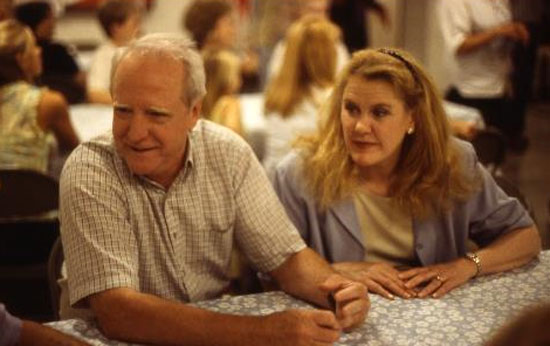 Enter George (Alessandro Nivola), who has escaped the hellhole that is the Tar Heel State (and his embarrassing family), and is now living in Chicago with his sophisticated wife Madeleine (Embeth Davidtz). She owns an art gallery (where the couple first met), and is visiting George’s hometown to persuade a local artist to sign on with her agency. It would seem that George is ashamed of his kin (he wanders on the margins while Madeleine does all the talking), but we know that a crisis will come that reminds the old boy that blood is indeed thicker than water. But that’s in the future. In the meantime, Madeleine does her best to get to know her in-laws, which is a near impossibility given Ashley’s mind-numbing chatter. She’s the type of person who will ask five unrelated questions, throw out her favorite animal, and relate an anecdote about cheer-leading, all within a 30-second span; all with the blank stare of someone who never really expected a response. She is white trash incarnate, yet the camera bathes her with loving tenderness and angelic light, as if to suggest that in the end, a moronic hillbilly will come as our savior. After all, while everyone else seems to have an agenda or is hampered by selfishness or vanity, Ashley floats above the din and sees things as they are (or should be). That she has more toes than I.Q. points, or is the least qualified human being ever to bring life into the world doesn’t seem to bother the filmmaker. She’s well-intentioned, after all, and so what if she’d rather paint fingernails or run to the mall at 8:30 in the morning than contemplate the universe. She’s sweet, saintly, and though not virginal, it seems well within the spirit of the film that she came to her current condition after a visit with the Lord. 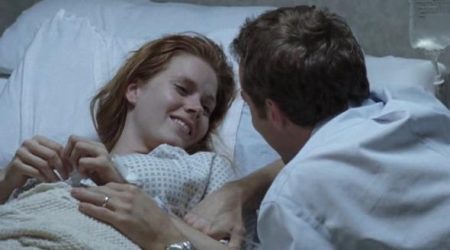 And while Ashley is the film’s heart, Madeleine is its brain, which is, as expected, her great curse. Hell, she’s not even American! She’s lean, pretty, and such a striking contrast to the locals that she all but sprouts horns in the middle of the baby shower. She too is well-intentioned (she’s never callous or snooty, even though she’d be more than justified), but she questions, doubts, and just might place her job over the feelings of others, which cannot stand in such a world. The deck is further stacked when, during her attendance at a social gathering, she refuses to bow her head in prayer. She even manages to maintain her composure when the chaplain comes over to the table and asks God to make her marriage a spiritual one, despite never having considered her feelings in the matter. And I’ll be damned if she doesn’t skip church the next day, further alienating her from the mother! The father might also care about her lack of deference to Jesus, but he’s too busy drooling in the corner to register a response. She’s also assumed to be defective because she doesn’t have any children (she’s asked several times, all with incredulity), and I can only imagine the outrage if she were to reveal that she doesn’t even want them. “Is she too old to have kids?” Ashley asks George, which would have been my cue to tell the cracker to “get fucked, cracker,” but as George actually loves his family, he chuckles and stays at the bedside of the mouth-breather. 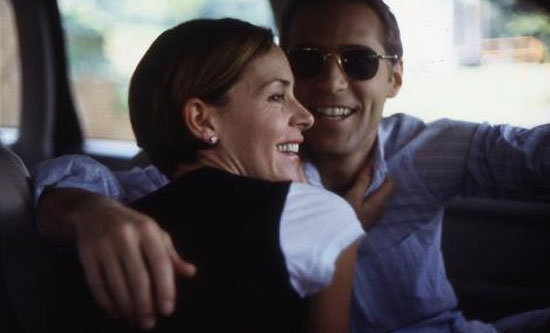 Madeleine also feels the wrath of her in-laws when she has the audacity to bring an antique spoon as a gift for Ashley. But isn’t that the Southern way? If it ain’t functional, what good is it? These are a people, after all, who are genetically incapable of appreciating art for art’s sake, and whose idea of culture is French Fry night at the bowling alley. Even Johnny gets in on the act, rudely proclaiming that he has a “real job,” implying that Madeleine’s gallery work is no more than a silly indulgence. Of course, he spends his days putting plates in bubble wrap, so he might be encouraged to rethink his position. Johnny has a more extended scene with Madeleine, as she volunteers to help him write a paper on Huck Finn so that he can get his GED. Predictably, Johnny spews out the line, “You ain’t better than us!” despite the unavoidable fact that she is — in motherfucking spades. During the brief tutoring session, he scratches his empty head even in the face of mere Cliff’s Notes, and despite claiming to have read the book, has no clue about Jim (or Huck, for that matter). And yet, Johnny is not an object of scorn or easy laughs; he is a tortured soul who is so unexpectedly loving that he tries in vain to tape a program about Ashley’s favorite animal. He ain’t much for words and such, but he’s got feelings, so he should not be mocked. That the illiterate and the insane have mustered the arrogance to expect equality is but one sign that we’ve reached the nadir of human existence. Once upon a time these cretins were banished and lobotomized; now they’re crafting policy.

And what about that loony artist that brought Madeleine down there to begin with? Oh, he’s your average guy, that is if you’ve ever encountered a maniacal holy roller who painted Civil War scenes teeming with giant phalluses and spewing semen. Once again, he’s so defiantly himself that we are meant to love his eccentricities. Did I mention that he refers to the slaves in his paintings as “niggers” (even though they have white faces) and that he won’t sign any deal if Jews are involved? Why is this fucker even tolerated, let alone allowed to avoid brutal verbal lashings? But according to the film, Madeleine’s the villain because she cares more about “the deal” than this madman’s humanity. It’s a perverse logic indeed, but one that permeates the film. In the name of acceptance and objectivity, the film tilts too far in the other direction and romanticizes truly awful people. George had every right to run like hell for more educated ground, but by the end, we know he treasures these folks and lies to his wife in order to keep the sort of peace he believes she would want. 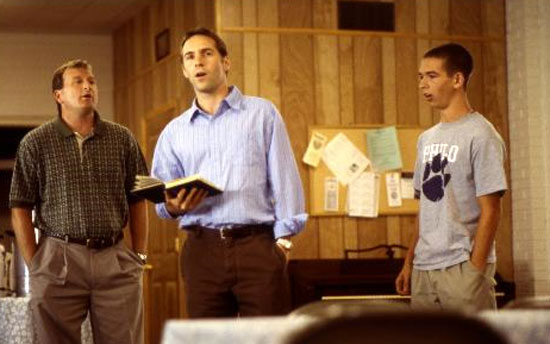 In the only sign that the filmmaker has any sense, Ashley’s baby dies, but this only brings George closer to “his people” and allows for further deionization of poor Madeleine, as she misses the birth while she’s pursuing the artist’s signature. Even worse, Johnny tells Ashley that he’d like to start trying to have another child, which might be viewed as insensitive in light of his son’s death five minutes earlier, but here meets with the screaming giggles of the dippy wife. So there we have it: those who live in colossal ignorance are superior souls because they can bounce back from tragedy and always maintain an unfailing optimism, while those who read books and attend college are doomed to depression, pain, and failing marriages. Jesus Saves, Mark Twain won’t help you get a job, and a woman who doesn’t know how to cook or sew couldn’t possibly be a good wife. I hated these fucking people with all the rage I could muster, but they got off too easy. Given our nation’s far right turn in recent years and the ascension of Southern-fried ineptitude and hubris, anything less than a bloodbath won’t do. I’d call for a new Gettysburg, but in light of today’s textbook wars, I’m starting to think they won that one as well.