I liked Gummo a lot. I wanted to draft a piece of legislation that would require Gummo to be shown in its entirety after the National Anthem is sung at all major sporting events. Julian Donkey Boy isn’t as good as Gummo.
Apparently it is about schizophrenia. This guy Julian has schizophrenia
and his dad (Played by Warner Herzog!) hates him. His sister (Chloe
Sevigny) is pregnant (With his baby?). I hate pregnant people in
movies. With the lone exception of Fargo, pregnant women only befall
tragedy in movies. Hollywood or Indie, it doesn’t matter. Pregnancy is
always treated as a device for tragedy. Where oh where are you, dear
Freud? I remember when my friend and I went to see Crossroads,
that new Britney Spears hunk of shit, I kept shouting the whole time,
“Why is that girl pregnant.” My friend kept handing me
anti-depressants. We were on ecstasy. However, if we had been straight,
she would have answered, “The girl is pregnant so she can have a
miscarriage.” Just like in Julian Donkey Boy.

Harmony
Korine is gifted when it comes to holding the camera. I found that if
you paused the movie (Make sure you get the DVD) randomly in any scene,
the resulting still image is beautiful. It makes me really long to
invent some sort of printer where you can easily print full size
posters from your paused DVD player. Julian Donkey Boy would give me a whole bunch of cool posters. Not as cool as Clint Eastwood standing on the overpass in the original Dirty Harry, but nice and arty and pretty. I guess that is my problem with Julian Donkey Boy. It never rises past the level of annoying art flick -the way Gummo so successfully did. Plus, Gummo had lots of death metal and Julian Donkey Boy
has a pretty limp wrested post-emo soundtrack. Actually, I’m not sure
if there is a sound track, because that would violate some tenet of the
Dogma 95 conventions, but I am sure that a “rebel” like Korine just
don’t give a fuck. It felt like bad, wimpy music. Think Yo-Lo-Tengo and
what people who used to really like Weezer are listening to now. If you
go on IMDB.com you will find a whole ton of people who attack Korine
for not sticking to the eaxting rules of Dogma 95. What fucking losers!
If you are interested in being a loser,

If you thought Ewen Bremmer was hard to understand in Trainspotting, you should just put Julian Donkey Boy
on mute because not only is he schizophrenic, but he plays it with a
southern accent. Chloe Sevigny was good in Kids where she looked hot
and fell asleep and got raped. I don’t think much of her onscreen
presence. She takes up space pretty well, and in this movie looks
pretty much like Cameron Diaz looked in Being John Malkovitch.
And she is pregnant for no good reason. The younger wrestling brother,
Evan Neumann is pretty good. I liked when he wrestled the garbage can,
but it reminded me of the AWESOME scene in Gummo where the
leader of the white-trash kitchen posse started beating up furniture.
The best parts of the whole movie are the scenes with Warner Herzog all
by himself. They are reminiscent of the good stuff from Gummo. Plus, any man who drinks Robitussin for a good time is all right by me.

Prepare yourself, because nothing really happens in Julian Donkey Boy. It’s possible that the whole thing takes place over the course of a single day. I hate that shit. Like that lame TV show 24 and the movies Training Day and American History X,
having a story take place in one day is a gag. OK, you are a neat
filmmaker. I get it. Now stop blinding me with your brilliance and tell
me a decent fucking story. Which most people can’t do. Jaws took like a whole week. You can’t tell what the timeline is for sure with Donkey Boy, because like Gummo,
there is no straightforward narrative. The personality of the
protagonist is the plot. Although, I have to point out that the plot
might be that Julian gets his sister pregnant, and then when she has a
miscarriage ice-skating while Julian is arguing with a nine-year old
Hasidic boy, the sister gets rushed to the hospital where Julian steals
the dead baby and lies down in bed with it. He looks sad. Again, it is
all beautifully shot, but you really don’t know what the fuck is going
on. I’m not saying that’s bad, just accurate. Also, Korine has become
spokesman for the deformed and retarded. With the excpetion of the
principle characters, everyone in the movie is blind or albino or an
aberation in someway. And I suspect Korine gets a kick out of it, which
leads me to…

These are good and bad. On the one hand, you learn that the Julian
character is based on Korine’s actual living uncle who was too sick to
leave the mental institution, so Bremmer went and hung out with him and
learned to emulate him. They have scenes of this and it lends
credibility and a level of interest to the story. However, you get to
see exactly hat a pretentious fuck Korine is, doing the interview in a
pristine Whitesnake T-shirt with his $300 haircut. I really wanted to
spit at him. A fucking fashion victim attempting to tell me how to
think. This is why I always carry a knife.

As horrible is
Sevigny. There is a scene in the movie where they have a hidden camera
hooked rigged up and she goes into a second hand store to buy baby
clothes for her future miscarriage. The other people in the scene don’t
know that they are being filmed for a movie. It’s just really sad and
despicable and bourgeois. What they are saying is, while her and Korine
can afford abortions and besides, smoking heroin has made them very
sterile, it is fun to go down to black neighborhoods and pretend to be
pregnant and poor. “Oh, isn’t it a gas how the other half lives! Now
legs go get pedicures and sushi.” Not that I have anything against
pedicures or sushi, but it was just really gross the way they filmed
that scene. Hire some fucking actors. Korine and Sevigny just made me
sick. Apparently they date each other. Figures. 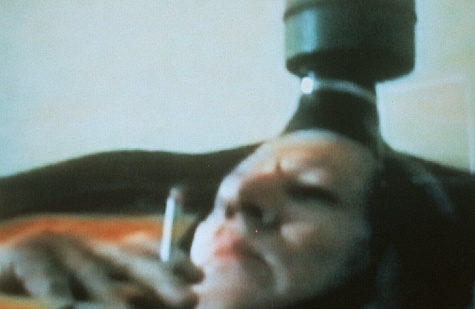