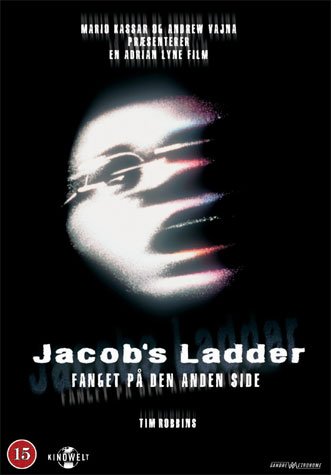 Sitting down to watch Jacob’s Ladder I was a little nervous. But not because the movie was scary or anything like that. No, the last time I watched Jacob’s Ladder (about thirteen years ago) was the first time in my life I ever touched a vagina. And after watching it again last night, I have some pretty good insight into my demented skull. What a horrible movie to finger some stink! Oh well, when the opportunity presents itself… decisive action… gift horse’s mouth. Um, ahem, yeah… Since then it has been many more vaginas and (sadly) way more films, just thinking about Jacob’s Ladder is emotional for me… The above is just one of those “I’m just saying” paragraphs. Shut up.

The film is concerned with Jacob Singer (Tim Robbins), a Vietnam vet who has some problems. Namely, he keeps seeing demons everywhere he looks and more often than not, they are trying to kill him. Told through the heavy use of flashback and narrative displacement, as the viewer you are never actually sure where Jacob is. Is he in hell, dead?  Is he with his new girlfriend Jezzie? Is he back at home with his estranged wife? Is he bleeding to death on a helicopter in Vietnam?  Jacob, who is living through all the craziness, is the least sure of all. The movie is heavy on religious themes (at one point Jacob calls Danny Aiello an Angel–and then an over-stuffed cherub) and when that doesn’t scare you bad enough, it uses lots of quick cuts and loud noises to spook you real good. Oh, and there’s a dead kid motif, too, and well, I just hate that. Also, it must be said that the constant use of flashbacks, while I guess instrumental to the plot, left me confused. Leaving viewers confused because a film is thought provoking is one thing, and admirable. Leaving viewers confused because, well, the story is confusing, is lazy and a little insulting.

Still, the movie was sufficiently creepy for me not to hate it (it’s a good watch) and for me to pay close attention, looking for meaning. There isn’t any, but I looked regardless. Much like trying to decipher Pink Floyd or Led Zeppelin lyrics–there’s nothing there but you’re stoned, so you try regardless. Also, I wanted to see what spooky thing happened next. Many of the scenes were in fact well acted and more often than not, well directed. In fact, the scenes without the monster effects and the jump cuts and the spastically shaking heads were the most effective to me. Like when Jake’s Lawyer (Jason Alexander) tells him he doesn’t have a case. Or when Jake and Jezzie are just goofing around in bed. Strong acting. But over all, the film is basically a gigantic “so what?” Jacob’s Ladder takes itself far too seriously at every turn. I know, I know, I know it is a thriller, but come on!  Every moment of Jake’s waking life is filled with existential terror? Bullshit, and besides, that’s my bag.  Actually, to be fair, the majority of the movie is quite right on, it is just the payoff at the end–the lazy payoff–that left such a bad taste in my mouth (it’s all a dream–I hate that). I’m flailing about here because on the one hand I remember being really engaged as I watched Ladder last night, but then on the other, thinking back after three hours sleep, the movie is pretty pointless. A good way for teenagers to creep themselves out, I guess, but not meaningful enough for adults to find any lasting value. Save for the artistic aspects.

The production design and cinematography were intense in this film. First of all, the New York there were using was straight out of Midnight Cowboy, burnt, decrepit, bleak and gray, the New York of Taxi Driver.  This was a hard place, to be sure, and the bland color saturation only added to the coldness of the sets and the grimness of everyone’s mood.  Especially Jake and Jezzie’s apartment, which contained no lamps, only diffused light peeking in from behind closed curtains. The whole city felt like a morgue. True, there were too many jump cuts, black screens and four-frame-per-second techniques employed for me to find it truly terrifying (when “horror/terror” becomes a trick of the camera, it is exactly that–a trick), but early on there were some legitimately upsetting moments. My favorite was quite early on when Jake is on the subway and he sees a presumably homeless man asleep on a bench. As he is getting off the train he looks and there is a big pink penis/tentacle thing contracting underneath the man. He does a double take, and there it is again. Very cool. Also, when Jezzie’s eyes suddenly go black, well, didn’t see it coming and it spooked me good.  And made me horny, apparently.

Fatally, the plot is a mess. He’s being haunted by demons, OK, that’s cool, but what the hell does that have to do with Vietnam? It is one of those unfortunate situations where the writer (the same guy who wrote Stuart Little 2) could only explain all the sick, convoluted shit by making it all a dream. And I hate that. It’s like pick one or the other, You don’t need to have a massive military cover up (Jake and his Battalion were experimented on with uber-potent hallucinogenic drugs) and have the whole demon/hell angle. One will suffice. What’s that? The drugs are making the men see demons? I thought the drugs make the men hyper-violent? They do both? How in the hell do you explain that? It’s just a dream before dying? Welcome to the world, buddy. I feel strongly that the writer was just trying to be as creepy as possible, throwing in every bit of hermetica and gloomy lore he could get his hands on. Giving the deficiencies of the script, director Lyne and the actors did an admiral job. Too bad it means nothing.

DVD Note: There are some pretty “trippy” deleted scenes on the disk I got. With director’s commentary. Though he never says why he chose to omit them. Curiously, two of the three scenes take place right at the end and one is about eight minutes long. Jacob is given the “antidote,” which you would think would be a major plot point. It’s not. One cool thing to look for is the giant eye. Creepy, like the penis/tentacle in the beginning.